HUDSON—The Columbia County Board of Supervisors has adopted a 2021 County budget that, for the first time in five years, calls for spending less than the previous year.

This year’s tax levy exceeds last year’s but contributes about the same percentage to overall county spending. The question left hanging for the county and all municipal governments is whether there will be cuts in state aid.

The 2021 budget adopted by the board December 10 calls for spending $155.5 million, an amount $4 million less than last year. That’s a decrease of 2.48%. Several factors contributed to the decrease, according to Matt Murell (R-Stockport), chairman of the Board of Supervisors in a cover letter to the spending plan. They include a $2.3-million decrease in salaries and a hiring freeze.

Despite the lower budget, Mr. Murell said, “No program maintained by the county has been eliminated, and no services have been cut. No reduction in the workforce has been planned.”

In addition, “the union agreement not to take raises includes the proviso that this would be revisited mid-2021 to determine if circumstances call for their restoration.” But the chairman said this would happen only in case of “the return to a more stable revenue stream, among other factors.”

The last time the county budget decreased from the previous year was 2017.

Although the 2021 budget calls for spending less overall, it does call for spending more on solid waste and capital projects. For Solid Waste budget heading, the increase is $254,000 (up 7.3%). “Garbage is a market driven business,” and its cost has gone up, Mr. Caponera said. For capital expenditures, the increase is $505,000 (up 5.1%). A major reason is the cost of new voting machines, Mr. Caponera said by email January 4.

The $44.5 million that taxpayers will pay in county taxes covers just 28.6% of the total county budget. The remainder comes from other revenue sources, which include the county sales tax and state funding for specific services.

But the state is currently “holding back 20% on funding” for purposes such as the county’s Department of Social Services, the Office for the Aging, and Health, Mr. Caponera said.

“It is important that we thank our employees for contributing to our effort to reduce spending while providing necessary services to our residents. Your sacrifice is greatly appreciated,” Mr. Murell declared in his December 10 statement. He also thanked the supervisors, Department Heads, Mr. Caponera, Treasurer PJ Keeler, and Human Resource Director Michaele Williams-Riordon for their efforts that “resulted in a final budget that reflects a realistic assessment of the challenges to be faced in 2021 as well as a commitment to fiscal responsibility….”

“As you all know too well, 2020 has been a very difficult year: Dealing with not only the personal and emotional fallout from the Covid-19 virus, but [also] the financial fallout to our local businesses and our county, town, city, and village budgets. This has been a period that none of us has ever experienced physically, emotionally, and financially. There is light at the end of the tunnel, but [for now] we [still] need to be vigilant.”

(Table 1 shows the total budget and the percent covered by property taxes by year for 2017 through 2021.) 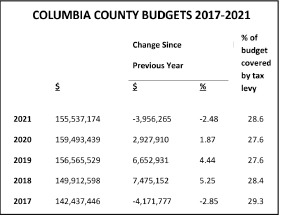