↓
Home Menu ↓
Skip to primary content
Skip to secondary content
Home→News→BLACK HISTORY: For some, county was stop on Underground Railroad

IN THE 1830s fugitive slaves increasingly moved to New York City for sanctuary. Many of these escapees were fleeing plantations located along Maryland’s Eastern Shore. 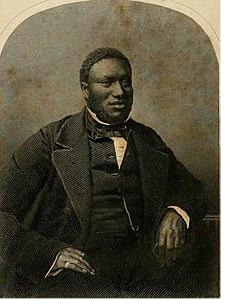 In his autobiography Samuel Ringgold Ward, above, wrote about his escape from slavery and his career. In the mid-19th century he lived in Poughkeepsie.

The networks managed primarily by Quakers and freed Blacks were dubbed the Underground Railroad. Columbia County had four “way stations” located in Hudson, Claverack, Ghent and Chatham, according to historian Fergus M. Bordewich, author of The Underground Railroad in the New York Hudson Valley.

Bordewich says that overland travel by horse-drawn wagons from New York City to the Hudson Valley way stations took an average 10 -14 days, but the invention of the steamboat shortened the journey on the Hudson River, from days to hours. The People’s Line sailed up to 500 “Abolition Boats” daily as 20 years of improvements to steamboat travel cut the journey to Albany from 15 to 7 hours.

The expansion of rail transportation north from Maryland, in 1851, reduced travel time from New York City to upstate by half and afforded fugitives greater ease of escape. They, literally, could buy train tickets at Grand Central Station to points north and west in New York, or east to New England.

While New York, generally, embraced anti-slavery sentiments, it did not support Black suffrage. An 1846 referendum extending the vote to Black males was rejected by 92% of Columbia County voters. As Fugitive Slave Law pressures intensified and debate on the extent of Black emancipation polarized, Abolitionist resistance and reprisals against them stirred strong passions and actions among the newly freed and their allies.

Samuel Ringgold Ward’s family escaped from Maryland in 1820, when he was three years old. They settled in New Jersey but moved to New York City when Samuel was eight years old. There he was enrolled at the Mulberry Street School, in what is now known as the West Village. The institution was later known as the African Free School in Ward’s “Autobiography of a fugitive Negro Samuel Ringgold Ward: His Anti-Slavery Labours in the United States, Canada and England.”

Ward was a gifted orator and his skills as a speaker led him to politics. Fellow Maryland fugitive Frederick Douglass described Ward as “an orator and thinker… vastly superior to any of us.”

Ward settled in Poughkeepsie and was a member of the Liberty Party for eight years. At its national convention, in 1847, Ward placed second in balloting as the vice presidential candidate. The following year Ward joined the Free Soil party due to its platform to prevent slave states from joining the union.

Ward’s participation in the “Jerry Rescue” in Syracuse forced him to flee to Canada. A Missouri slave, William Henry, escaped his owners and had been living in Syracuse since 1843. Locally, Henry was known as “Jerry” and labored as a cabinetmaker and repairer of casks and barrels. Eight years later, “Jerry” was seized from his place of employment by U.S. Marshals and jailed in accordance with the Fugitive Slave Acts.

As Ward describes it, he and several cohorts, including ministers, rallied a mob to “rescue Jerry” before slave catchers arrived to claim him and return him to Missouri. The incensed liberators stormed the jail, removed “Jerry” and escorted him to a waiting wagon to begin the long journey to Canada.

Authorities sought out the “Jerry Rescue” instigators and it was determined that Ward, too, should seek refuge in Canada. To do so he abandoned the two newspapers that he owned and edited, Farmer and Northern Star, and Boston’s Impartial Citizen.

In his new homeland, Ward became active with the Anti-slavery Society of Canada, which asked him to embark on a fundraising tour of England. He did so in 1853, a fortuitous time because Harriet Beecher Stowe, author of “Uncle Tom’s Cabin,” was also in England giving readings from her seminal book.

In 10 months Ward raised twelve hundred pounds for the Canadian group. It was two years later that Ward penned his own autobiography. The text is currently hosted on the website of the University Library at the University of North Carolina at Chapel Hill at docsouth.unc.edu .

Proceeds from book sales enabled Ward to retire with his wife and two children to Jamaica. There, Ward farmed and preached at a Congregational church for 11 years before dying at age 49.