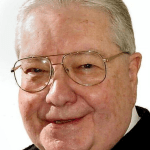 He was born in New York Hospital in Manhattan, February 7, 1937 on East 88th Street. As he liked to say, “I grew up on the Upper East Side!” He was the youngest of the six children of Catherine McNicholas, a homemaker, and Patrick Feeley, a railroad engineer. Both his parents immigrated into the United States from County Mayo in Ireland.

While his older siblings were either in school or working, he was well-cared for after school hours by the Sisters of the Congregation of Notre Dame of Montreal who taught in the St. Jean Baptiste parish school. “Frank” treasured the memory of that experience and kept in touch with those sisters, always remembering them with great affection.

After his graduation, he worked at D’Agostino’s Grocery Store and then in the purchasing department at Lenox Hill Hospital in Manhattan. While reading in the Sacred Heart Messenger about the Holy Cross Brothers, he was inspired to send a note to Brother Edward (then Hyacinth) Sniatecki. He received a quick response and June 16, 1957 at the age of 20, he found himself at Valatie to begin his formation. He was received as a novice August 15, 1957 in Rolling Prairie, IN.

Brother Feeley began teaching at Bishop Hendricken High School in Warwick, RI. After three years, he was transferred to Notre Dame High School in West Haven, CT, where he served in ministry for 35 years. In those years he taught a variety of subjects including religion, business, typing and Spanish. He worked in the Treasurer’s Office as the assistant bookkeeper. He was moderator of the Mothers’ Club and Parents’ Association. Recognized as one of the legends of Notre Dame High School because of his generous service over his long tenure, he was named a Knight of Honor by the school.

In January 1998, he became the director of St. Joseph Center in Valatie, the province’s residence for its older brothers. In 2012, he retired from active ministry and continued to be a resident and active member of the local community.

He was a welcoming presence and had a warm, kind and sincere smile. He had high expectations for his students and could put on a good show with a bellowing voice when they were rambunctious. He was interested in his students and their lives, remembering their birthdays and families. If anyone asked him to pray for them or for a special intention, he never forgot and they never got off the list, which he read every day at Mass.

He appreciated and loved those whom God put in his care to serve. He treated them kindly and challenged them strongly to be their best. Early on he learned the value of being shown kindness, care, and safe refuge by the sisters, and passed that on to all he met. “We thank God for his presence among us, and rest assured that he is held in the loving embrace of our God who loves us.”

There will be a closed funeral liturgy at St. Joseph Center in Valatie in keeping with current safety guidelines. Burial will follow in St. Joseph of Holy Cross cemetery on the grounds. A public memorial Mass will be held at a later date. To send condolences visit raymondbondfh.com. 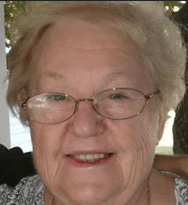 Born August 20, 1930 in Danvers, MA, she was the daughter of William Hawkes and Emily Schneider. She was a graduate of Hudson High School. Upon graduation, she worked for many years as a seamstress and waitress at the Columbia Golf and Country Club, Hillsdale House and Rigor Hill Diner. She enjoyed reading, doing puzzles, playing her piano she also treasured spending time with her family, friends, grandchildren and great-grandchildren.

She was predeceased by her husband, Morland Northup; her infant daughter, Diane, and grandson, Cory Northup. She is survived by: her children, Scott Northup (Leslie), Peter Northup (Peggy), Nancy Noto (Chuck), Brian (Danyel) Northup, Carol Fuss; many grandchildren, great-grandchildren, nieces and nephews. Visitation at the Bates & Anderson- Redmond & Keeler Funeral Home will be held Thursday, March 18 from 4 to 6 p.m. Funeral services will be held at the funeral home, Friday, March 15 at 10 a.m. with burial to follow at Mellenville Union Cemetery.

Born May 30, 1974 in Hudson, she was the daughter of Robert Friss and Genowefa (Malcut).

Ms. Friss was a cook at Whittier Nursing Home. She was a huge fan of the Buffalo Bills.

In addition to her parents, she is survived by: her brother, David Friss; several nieces and nephews. She was predeceased by her sister, Karen Friss VanAlstyne. 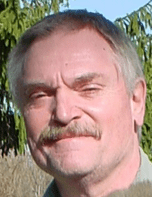 “Joe” was born in Clausthal-Zellerfeld, Germany to Hungarian refugees Eva (Eszes) Rozs and Joseph Rozs, January 25, 1947. He entered the U.S. through Ellis Island in 1953. He spent his childhood years in Milwaukee, WI, and Cleveland, OH, graduating from Lakewood High School, Cleveland in 1965. He spent four years in the Air Force, stationed at Westover Air Force Base, Westover, MA, as a fitness instructor. He continued his passion for fitness by pioneering the fitness center business. In 1976 he and his wife, Heddy, opened Nautilus Lifesport, bringing the first Nautilus equipment to upstate New York. They owned and operated this center for 25 years. In semi-retirement, he continued to personally train clients. He loved biking, doted on his cats and dogs, enjoyed the outdoors and yard work, and was a music enthusiast. He had a great sense of humor, was quick-witted with his jokes and was the “king of puns.” He is survived by: his ex-wife, partner and friend of 50 years, Adela Heddy Rozs; cousins, Livia Eszes, Judy (Eszes) Scharfenberger, Zoltan Eszes of the Milwaukee area, Eva Eszes of Berlin, Germany, Laszlo Kozmon and George Kozmon of the Cleveland area. The family extends their gratitude to the doctors, nurses and staff at Berkshire Medical Center Hospital for their compassionate care, and to Berkshire Medical for allowing visiting hours for the last month of his stay. Memorial donations may be made to The Threshold, 600 Rolfs Avenue, West Bend, WI, 53090 www.thresholdinc.org. A Memorial celebration and burial will be held at a future time. To send condolences visit raymondbondfh.com.