Born October 16, 1928 in Poughkeepsie, she was the daughter of the late DuBois and Ruth (Clina) Haight.

In addition to raising her family, Mrs. Weber was the bookkeeper for George Hapeman Contracting.

She is survived by: her daughter, Kim Denu of Rhinecliff; her son-in-law, Glenn Denu of Tivoli; her loving grandchildren, Jennifer (Karl) Frizzell of Germantown and Brian (Amanda) Denu of Red Hook; her great-grandchildren, Tyler Rathjen, Ethan Denu, and Sarah Denu; extended family and friends.

Her daughter, Sherri Denu, her son-in-law, Gordon Denu and a brother, Douglas Haight also predeceased her.

Her family thanks the staff of the Meadows of Brookmeade for the care and compassion shown to Mrs. Weber during the time she was in their care. 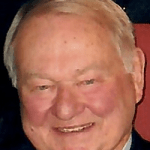 He was a graduate of Albany High School, Union College and Albany Law School. He was a veteran with the U.S. Air Force and started his practice with the law firm of Sanford and Forner in Albany.

He served as an assistant district attorney and assistant public defender in Columbia County and as well as a Village of Kinderhook justice. He retired as an administrative judge for the New York Office of Racing and Wagering.

The greatest joy in his life was his wife, children and grandchildren.

Funeral services will be held Friday, April 30, noon at the Raymond E. Bond Funeral Home, Valatie. A calling hour will be held Friday from 11a.m. to noon prior to the service. Burial will follow in Kinderhook Cemetery. In lieu of flowers, contributions may be made to the Valatie Rescue Squad, P.O. Box 242, Valatie 12184.