MOZART DIED while still in his 30’s; how much wonderful music did the world lose? Frederic Church’s talented hands developed rheumatoid arthritis while he was still in his 50’s; how many great paintings do not now hang in museums because those hands could not paint them? Church was the greatest of the many Hudson River School of Art landscape painters and he lived and worked in his mansion, “Olana,” just south of Hudson. In his later years, even though he saw his painting skills fade, he would persist as a practicing artist. 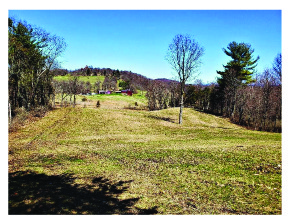 Church became a landscape architect at a time when the field was being invented. His Olana estate of 250 acres became the canvas for this, his new art. Church made fine art of his many acres by planting thousands of trees exactly where each one would enhance the landscape. He planned all the many twists and turns of his long driveways so that each bend would open up a new grand vista. But mostly Church employed the concept of the “planned view.” Every one of his architectural strategies was aimed at creating spectacular visions. With the Hudson River, the Hudson Valley, and the Catskill Mountains as backdrops, he was enormously successful; Olana is a milestone in the early history of landscape architecture.

The two of us have long recognized that it was the glaciers of the Ice Age that first shaped this landscape and we have been, for years, documenting how each of his planned views had an unplanned ice age ancestry. On May 1 we will be visiting Olana and are scheduled to lead a two-hour walk exploring its ice age origins. If you go to Olana.org you can sign up to join us. But today let’s describe one unplanned view we won’t have time for. That’s the view from Crown Hill, south of the mansion (see photo).

We stand at the top of Crown Hill and look north; we can just make out the Olana mansion atop Church Hill. Beyond it is Mt. Merino. But we become the mind’s eye, the human imagination, and we drift back through time to 25,000 years ago. The climate has been deteriorating. The onset of harsh cold weather has been killing off the forests of what will become Olana. Now we look just to the right of Mt. Merino and we see something new and strange. It is a dark blue early in the day. As the sun rises it brightens to yellow and then a diamond white. It is a glacier.

The ice is advancing; we, the mind’s eye, are given to watch as it swells up and overcomes first Mt. Merino and then Church Hill. Both disappear beneath the ice. We can’t see what’s going on down there, but we know that both hills are being shaped by the passing glacier. The ice will not stop until reaching New York City. Then it will melt back and uncover Church Hill much as it will be when Frederic Church arrives. Church will improve upon the glacier’s efforts.