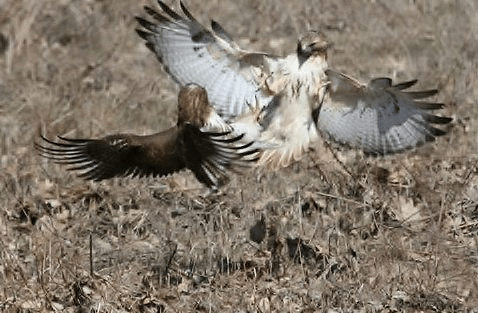 IT’S A TOUGH WORLD out there for our birds. Spring seems so peaceful and happy. We look at the flowers and beautiful birds are flying around the yard and across the countryside. I am still putting bird seed out so new bird arrivals have something eat. They migrate hundreds to more than a thousand miles to get here, and some of them are darn hungry.

The first gorgeous rose-breasted grosbeak landed on the lawn yesterday and proclaimed it was his. He is about the size of a robin with a shorter tail, dressed in black and white feathers with the brilliant rose-colored bib against a white breast. The name grosbeak is just that, a large, strong, seed eating tool. It is also an impressive weapon. He has been attacked by black-capped chickadees, sparrows and cardinals who think he is an intruder and should at least share the food. No way says the grosbeak. He flutters his wings, opens that impressive beak, and tries to bite the other birds, who give up and leave.

So far, the only birds that have successfully scared him off are the much larger, longer billed, blue jays. Once they have fed, the grosbeak comes right back. So, the first bone of contention in the seemingly tranquil spring is food competition. If you are hungry, it is hard to do much of anything else. One of the worst and most impressive food fights I have seen was between two red-tailed hawks that were fighting over roadkill at the edge of a field (see photo). The slightly smaller bird on the left finally flew up in a tree to wait until the victor had his fill.

The next item to cause disputes is territory. Usually, the males must sort this out, and they often arrive before the females. The red-winged blackbirds, eastern bluebirds and ruby-throated hummingbirds are examples. The females are smart and let the guys figure it all out, so they don’t have to deal with it when they arrive.

Mating rights and making an impression on the females is another major area of disagreement. The male hummers chase off male rivals then do impressive swoops up and down in the air and hover before a perched female. If she likes what she sees the nesting season begins. The tom Wild Turkeys have fought and claimed area fields and are loudly gobbling all over the countryside. Hens come to the calls and check out the toms. Yesterday a huge tom was all puffed up with his tail fanned. He was dancing around in circles so the three hens could admire all sides of his handsome body. What a showoff. The hens always keep eating and act totally disinterested. Then, by some signal, one may say I am ready, and they mate. Then she is off to find a secluded place to lay her eggs. By the end of the mating season the males have lost much of their body fat and look pretty wasted. They are so infatuated and focused on mating and guarding territory they don’t eat for long periods of time.

The Mallard Ducks are flying nearly everywhere there is water. Drakes are flying to chase away rival males and then fly after the hen. They have some brutal looking matings, where the drake holds the poor hen under water. Just when you think she has drowned she pops up for air. Then eggs and young must be guarded from predators that are often other birds. Fortunately, it all works out eventually and soon summer is here. Things become more peaceful again, and birds have time to grow up and everyone fattens up for the fall migration. But for now, don’t be surprised if you see lots of angry birds, and it is not a computer game. No evil green pigs steal bird eggs, but the principals of competition and survival are the same.