MY UNCLE WAS ALWAYS GOOD at teaching us interesting things he thought we ought to know, and entertained us when things got a little slow, or when he needed a short rest from all the hard farm work. Probably it was also a good way to keep us occupied and out of his hair. I would hang out around the cow barn, or occasionally pass through on the way to find a favorite cat, and he would ask me a question that would stop me in my tracks. That day he knew I had just been given a jackknife by my grandmother, and he asked me if I knew how to make a willow whistle. No, I didn’t, and he sent me off behind the barn by the pond to cut a branch from the big weeping willow tree.

I was usually barefoot in those days, which was a good thing because it was a wet, muddy area. He said it should be about 1” thick and be straight and free of knots. That kept me looking for a while. I wasn’t that tall that year and had to stand on tip toe and pull down a thin branch to cut it at a thicker part.

I came back with quite big branch and was cautioned not to drag it through the barn and scare the cows while they were being milked. Relaxed cows were more inclined to give up their milk and less inclined to kick off the milking machines. 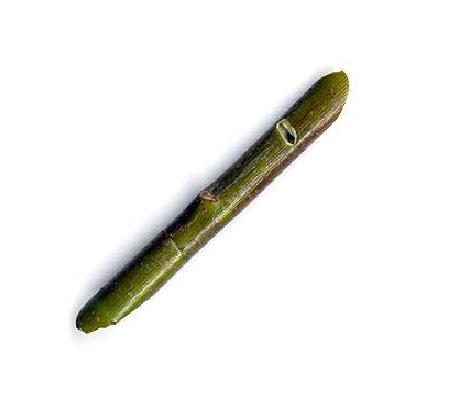 When he got a break, he met me by the door out to the barnyard and came out to show me how this project was done. He cut out a straight section of branch about 6-7” long and free of knots. Because it was spring, the sap was flowing in the limb and the bark was easily slipped off the inside wood and in one nice little brown cylinder. The slippery wood was dried, and he skillfully cut out the sound chamber in the middle and a small slice off one end so air could be blown through it. He slid the bark back on and cut a small half circle hole at the sound chamber so the air could escape. I gave it a try and made a great noisy whistle from it. He said if I made the chamber different sizes, I would get different pitched whistles.

I can’t remember how many branches I cut, but I was off to the willow tree for days, sometimes climbing up the fence by the pond to reach higher branches. The first few tries weren’t very successful, but I kept at it and used his prototype to figure out where I was going wrong. Eventually I got it and started making them in different sizes. There was a thin sort of punch blade in the jackknife and on one of the bigger whistles I got a hole through the end and put a string through it for a lanyard. Periodically my uncle would check to see how I was progressing and looked pleased.

It was a great way for me to increase my knife skills on an interesting project. I don’t remember getting any cuts on my fingers, which was the most important part of the process. I always had bleeding, skinned knees or cat scratches so wasn’t anxious to have any more stinging alcohol and Band-Aids.

The horses didn’t think much of the whistles. The dog, however, thought this was great fun. We had a game of hide and go seek which I have played with all our dogs. This dog was a cocker spaniel and wasn’t quite as smart or as obedient as my later Shetland sheep dog. She was the best. I would put the dog in a down and stay position and go off to hide. Behind a wood pile, or lying in deep grass worked well. I would blow the whistle and yell come, and she would start tracking me in the direction of the whistle and gleefully attack me with wagging tail and lots of face licking. It was fun and good exercise for us and made many fond childhood memories. I wonder, maybe today I will make a willow whistle.