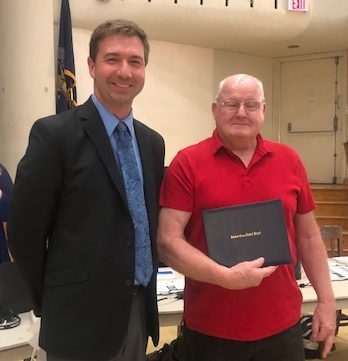 High School Principal Craig Shull (l) presented Richard VanWie with his high school diploma at the board meeting on July 13. The presentation was made possible through the state’s Operation Recognition for veterans who were unable to finish high school due to their military service. “I would like to thank Lance Corporal Richard H. Van Wie for his service to our country and community, and I would like to congratulate him on receiving his diploma this evening,” Mr. Shull said in his statement about Mr. VanWie. (More in the story.) Photo contributed

KINDERHOOK—The Ichabod Crane School Board held in-person organization and regular meetings July 14. Board President Matthew Nelson, who was newly reappointed to that position, said that the board could no longer hold online meetings according to the state open meetings law. He also said that board members could not attend remotely. The board is working on livestreaming the meetings.

During the last school year, when an executive order from Governor Cuomo changed open meetings law to allow for boards to meet online, the School Board held hybrid meetings. At those meetings some board members and a limited number of members of the public met in-person while many more people attended the meetings online. The meetings were held on Zoom.

At this first meeting of the 2021-22 school year there were only a handful of people in the audience plus administrators joining with all board members in the high school auditorium.

At the organization meeting, the board swore in new board member Anne Schaefer. Ms. Scheafer was elected in May along with Jennifer Allard and Jared Widjeskog. Ms. Allard and Mr. Widjeskog were sworn in June. All three new board members will serve until 2024.

Mr. Nelson was unanimously re-appointed board president. Board member Elizabeth Phillips was appointed vice-president, with all board members voting for her except Jeffrey Ouellette, who abstained. Mr. Ouellette voted against the consent agenda at the organization meeting saying that he felt the board should put out a Request for Proposals (RFP) for an insurance company.

At the regular meeting, district Superintendent Suzanne Guntlow updated the board on Covid-19 protocol, saying the district received some updated guidance in early July. But she said the new guidance seemed to be that the district could choose what guidance the board and administrators want. She also said that there has been a slight uptick in the number of virus cases in the area so there is a little hesitation from the Department of Health on new guidance.

Posted on the website was the announcement that on July 12 “the 22 school districts that make up the Questar III BOCES region sent a letter to New York State Health Commissioner Dr. Howard Zucker advocating for updated Covid guidance ahead of reopening school in September. The letter recommends changes based on lessons learned this year, the current downward trend of test positivity and the consensus of local school superintendents.”

The letter, which was also sent to senior leaders at the state Education Department, local elected officials and county health officials, requested changes including loosening mask restrictions, returning buses to full capacity, and allowing for three feet of physical distance.

Ms. Guntlow told the board at the meeting last Tuesday that the superintendents in Questar III BOCES met to come up with protocols for the summer school program. Assistant Superintendent Lucas Christensen reported on the summer school numbers. 98 students in pre-k through 3rd grade are attending an “invitations” summer program, which was based on academic need. About 125 middle school students (4th through 8th) and over 50 high school students are in summer school based on course failures. There are also a handful of students from the Maple Hill School district in the high school program. And some students are taking online “credit recovery” classes. This summer, the district also offered a special program for students to focus on English language proficiency. Mr. Christensen reported that 43 students are in that program in grades kindergarten through 8th.

Due to some federal grant money, the district also offered a summer enrichment program with Teaching Artist Tom Lee. Mr. Christensen told the board that the turnaround for that program was very quick so that next year they will have more time to plan and involve more district staff. About 57 students are attending different classes in Shakespeare, Chinese poetry and botanical art, among other programs offered this summer.

Mr. Christensen thanked all the staff, teachers and bus drivers involved in the summer program. And Ms. Guntlow thanked “everybody who pulled this program together” after a tough school year.

As for federal grant money, Business Administrator Micheal Brennan reported that the application for the Coronavirus Response and Relief Supplemental Appropriations Act (CRRSAA) funding has been submitted but that the district is still waiting for guidance on the American Rescue Plan Act (ARPA) application. There is information about the grants on the district website at www.ichabodcrane.org

Districts recommend ‘changes based on lessons learned this year… and the consensus of local school superintendents.’

* Mr. Brennan reported that due to low interest rates the district will be saving about $600,000 in interest payments on the $25-million capital project currently taking place. Mr. Brennan called that “outstanding results” and told the board they would discuss more about what to do with the savings at future meetings. Ms. Guntlow said there would be a full report on the project in September but currently the large hole in front of the high school building is for the new propane tanks

* The board heard a report from the Kinderhook Memorial Library Director Annalee Dragon about a new reading collection to help early readers that will soon be available at the library. She talked about the library’s partnership with the school district

* The board gave a high school diploma to Lance Corporal Richard Van Wie, 80, who was at the meeting, under the state Education Department’s Operation Recognition. Mr. Van Wie was surprised by the recognition, saying, “You got me.” In his introduction, High School Principal Craig Shull said, “This is the seventh diploma that Ichabod Crane has given out since the program started. To be eligible, the honoree must be an NYS resident, have proof of service, and have been honorably discharged.” Mr. Van Wie served in the US Marine Corps from 1962 until 1966 and was awarded the Good Conduct Medal.

The next regular board meeting will be Tuesday, August 3 at 7 p.m. in the high school library.