HUDSON—Sue Marcia Rider, 80, of Hudson passed away Monday, July 5, 2021, peacefully, with her loving family by her side. Born September 26, 1940, she was the daughter of Sue Bruch and George Develin.

Funeral services and interment at Cedar Park Cemetery were private. In lieu of flowers, contributions her memory may be made to Community Hospice of Columbia/Greene. Visit www.batesanderson.com to leave condolences.

POUGHKEEPSIE—Gail Elizabeth (Mueller) Alonge passed away peacefully with her family by her side, July 5, 2021 at Vassar Brothers Hospital.

She was born and raised in Hudson and graduated from Hudson High School in June 1965. She moved to Chicago to attend nursing school. In 1967, she returned to Hudson and graduated with a registered nursing degree from Columbia Memorial Hospital School of Nursing. She then continued her studies, and earned her Bachelors of Science Degree in nursing from St. Joseph’s College in New Hampshire.

She married Gaetano Alonge, October 5, 1969 and they moved to Pine Plains in 1970. They have two daughters, Colette and Dana. Mrs. Alonge worked at Sharon Hospital as an emergency room nurse, patient education coordinator and nursing supervisor for 30 years. After retiring from Sharon Hospital, she worked as a nurse for Hudson River Healthcare and Millbrook School. She was known for her compassion for her patients, clinical knowledge and calming demeanor. After hours, she would assist her friends and neighbors with medical concerns.

Mrs. Alonge was a member of St. Anthony’s Parish where she taught Sunday school and was a lector. She loved spending time with her family and pets, playing games with her grandchildren, reading, traveling, having lunch with friends, listening to music and praying. She supported many charitable organizations such as St. Jude’s, Shriner’s Hospital and the SPCA.

Visitation hours at the Bates & Anderson-Redmond & Keeler Funeral Home are Tuesday, July 13, 2021 from 4 to 7 p.m. A Mass of Christian Burial will be celebrated from Holy Trinity St. Mary’s Parish in Hudson, Wednesday, July 14 at 10 a.m. Interment will be in Cedar Park Cemetery.

In lieu of flowers, memorial contributions in her name may be made to St. Jude’s Children’s Research Hospital, 501 St. Jude’s Place Memphis, TN 38105 or StJude.org.

Born in Hudson February 26, 1928, he was the son of the late John and Magdelina (Hornet) Brodowski.

He graduated from Hudson High School and proudly served in the United States Air Force from 1946 to 1949. He was the superintendent of the print shop at the Universal Match Factory in Hudson for 37 years until it closed in 1988.

He was predeceased by: his loving wife, Sally (Mackey) Brodowski and brother, John Brodowski.

Mr. Brodowski will be laid to rest at the Cedar Park Cemetery, beside his wife, Sally. At his request, there will be no calling hours. Visit www.batesanderson.com to leave condolences. 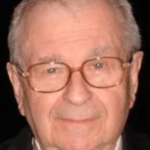 SCHENECTADY—Irwin Diamond, age 91, died July 7, 2021 at the Kingsway Nursing Home. Born and raised in Hudson, he was the son of Harry and Lena Diamond of Hudson.

He lived most of his life in Hudson with his loving wife of 68 years, Gloria, who preceded him in death this past January. Mr. and Mrs. Diamond moved into the Beverwyck community in Slingerlands five years ago.

He graduated from Syracuse University with a degree in business. It was at SU that he met Gloria, marrying right after graduation in 1952. After living in Philadelphia while he was in the Army, they moved to Hudson where they started their family and Mr. Diamond joined the family business with his father and uncles at Columbia Auto Parts.

He was a life-member of Congregation Anshe Emeth and served many years on the board of the synagogue. He was also a Mason and long-time member of the Hudson Lions Club, B’nai Brith and Brotherhood.

Mr. Diamond also played a key role in the redevelopment of Hudson in the 1970s, helping to come up with the iconic slogan “SPOUT,” Society to Promote Our Unique Town. In addition to contributing to the community, he also was honored by NAPA Auto Parts as being the first in their network modernizing his store concept to an open plan.

Mr. and Mrs. Diamond enjoyed traveling over the years. They loved visiting Mexico, the Caribbean islands, and traveling around the United States and Canada in an RV. With their love of antiques, and retailing in their blood, they decided after retirement to open an antique shop in the Adirondacks. Spending their summers buying and selling antiques and collectibles, they displayed and sold their finds in the Victorian home that they renovated near Schroon Lake, calling the store Hi Tor.

He loved to drive in and around upstate New York. He was also a great baseball fan, spending many hours enjoying his NY Yankees. Everyone who came in contact with him described him as “such a sweet man,” including his long-time employees and customers.

Mr. Diamond was a constant presence and devotedly cared for his wife as her health declined, a steadfast husband and partner through it all. Following her passing in January, he had a debilitating stroke in February, not able to return to his home at the Beverwyck. Having spent the last few months in the care of Kingsway Nursing Home, his daughters were a constant presence at his side. He will be greatly missed by all who knew and loved him.

Mr. Diamond is survived by: his daughters, Sherry Lynn Diamond and her partner Art Feinglass of New York City, Michele Diamond Mirsky and her husband Leon Mirsky of Albany, Suanne Beth Diamond and her partner Rick Senger of Rancho Palos Verdes, CA; his brother-in-law, Zane Gubman of Boynton Beach, FL; nieces, Sima, Risa; nephew, David; also many loving cousins who were in constant contact, especially during his final months. Nothing was more important to him than his family. His daughters also thank all those who cared for him, especially his aide, Nancy at Kingsway, Diane Williams of Troy and all the caring professionals at Kingsway and The Community Hospice.

The memorial service was held at Bates & Anderson Funeral Home in Hudson, July 9 with interment following at Cedar Park Cemetery. Memorial contributions may be made to Congregation Anshe Emeth, 240 Joslen Boulevard, Hudson 12534.