GHENT—Columbia County Sheriff is the only contested, countywide seat in the 2021 election. Deputy Sheriff Don Krapf is challenging the incumbent, Sheriff David Bartlett, who seeks a third, four-year term.

Both candidates completed a Columbia Paper candidate profile questionnaire. The Columbia Paper asked the candidates to participate in an interview for publication ahead of November 2 election. Early voting begins October 23 at the Columbia County Office Building, 401 State Street, Hudson and at the Martin Glynn Municipal Building, 3211 Church Street, Valatie.

There are other offices on the countywide part of the ballot, but each of those candidates is running unopposed.

(In addition to the candidate profiles in this issue, The Columbia Paper has interviewed each of the candidates for sheriff at length. Those interviews will appear in our October 28 issue.- Ed.) David Bartlett, 60, is the incumbent sheriff and is seeking a third 4-year term. He was born in Auburn, NY, and now lives in Kinderhook with wife, Lori, and their children. He is a registered Republican.

He has served 37 years with the Sheriff’s Office, “working my way up from the bottom rung entry level to my current role as Sheriff.” He is also the elected president of NYS Sheriff’s Association, a bi-partisan organization of sheriffs from across the state.

In his 150-word candidate statement: “There’s nothing more important to me than the safety of Columbia County residents. I’ve dedicated 37 years to serving and protecting our communities as a member of the Sheriff’s Office, including the last eight years as your elected Sheriff. During my time leading the agency, we’ve made tremendous strides in ensuring that the criminal justice holds accountable those who do harm, works to rehabilitate those who are convicted so that they can become productive parts of our community, and works hand in hand with members of the community with positive police-neighborhood relations.

“Looking forward to the next four years, I’m particularly focused on Police Reform so that our agency continues to be a leader in ensuring that justice is served fairly and without bias. While I firmly oppose the ‘Defund the Police’ movement, I am committed to finding innovative ways to continually improve how the Sheriff’s Office interacts with the community.” 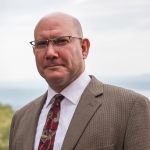 Deputy Sheriff Don Krapf, 49, is seeking election to what would be his first term as sheriff. He is endorsed by the Democrats and has an independent line on the ballot as Columbia United. He is not enrolled in any political party.

He was born in Hudson and currently lives in Greenport. He attended Columbia-Greene Community College. He has been employed for 24 years with the Columbia County Sheriff’s Office.

His campaign’s 150-word candidate’s statement says: “Don Krapf has spent his entire adult life serving Columbia County. Whether in the Sheriff’s Office or working on fundraisers to benefit local organizations, he has been committed to making our community better. In serving over two decades with the Sheriff’s Office, Don has gained a strong understanding of the great need for transparency and accountability. It is important to have leaders who push to always do what is best for the community, which is why, when elected, Don will appoint Jackie Salvatore as undersheriff. Jackie has an incredible background and vast knowledge of this community. Under their leadership, the Sheriff’s Office will interact with each community, build stronger relationships with local leaders, and work closely with the District Attorney’s Office and the Board of Supervisors to make our criminal justice system more fair. To be successful, we must gain trust through transparency to build respect.”

Columbia Paper reporter Lorna Cherot Littleway conducted separate interviews with David Bartlett and Don Krapf, the two candidates for Columbia County Sheriff. Below is some of what they said.

Columbia Paper: Regarding the alleged 2020 Howard Handy assault, for which Columbia County deputy Kelly Briscoe Rosenstrach and her husband, Alex Rosenstrach, have been charged with assault, is there anything you would do differently?

David Bartlett: I’ve never been afraid of doing the right thing in every case, regardless of who’s involved or what political fallout may occur. In this case, a deputy was allegedly involved in a crime and has been arrested along with three others. They’re currently facing prosecution, just as would’ve occurred had one of the alleged perpetrators not been a deputy.

CP: Regarding police reforms, what would you embrace?

DB: I’m proud that our Sheriff’s Office has been ahead of the curve, working to modernize policing long before the issue came to the forefront nationally in recent years. We’ve taken real meaningful action to level the playing field for every member of our community, and approach law enforcement from the human side. For example, I supported the use of body cameras on deputies and dash-cams in vehicles. I began outfitting our patrol cars with dash-cams when I first became sheriff, and in 2020, I was able to equip every member of our uniformed road patrol with a body camera to record our interactions with the public.

Another example is our partnership with Columbia County Mental Health and Twin County Recovery Services (Greener Pathways), where we launched a very successful police referral system to help engage people with the services that they need for the substance abuse or mental health issues. We continue to have meetings regularly between our agency and mental health providers to enhance our programs and collaborate to ensure that those struggling with substance abuse or mental health disorders get the treatment and services that they need.

CP: What training in de-escalation of situations does Columbia County law enforcement receive?

DB: I’m a strong proponent of training and working to de-escalate situations whenever possible. Since 2018, the employees in this agency have completed more than 35,000 hours of training on dozens of topics, including de-escalation and minimizing use of force, de-escalation tactics for military veterans, de-escalation and communication, mental health awareness and response, and much more. I’ve made these training programs a priority.

CP: (Currently the Sheriff’s Office does not have an appointed undersheriff.) What qualities are you looking for in an undersheriff?

DB: I have been fortunate to be able to surround myself with a very capable and competent command staff, who essentially run the day-to-day operations of this office. The position of undersheriff is a very important administrative position, and I will be looking to fill it soon with someone who has exceptional management skills, and someone who I can count on to lead this agency in my absence.

CP: Have you introduced any changes from the reform process required by former Governor Cuomo?

DB: The Columbia County Sheriff’s Office has worked hard to develop our Police Reform Collaboration Plan and begin to implement the recommendations. The Board of Supervisors formally submitted our plan in March 2021, and I’m grateful to all of the community stakeholders who took part in the process …. We got the plan done and now continue to work to implement it. Being an accredited agency in our 4 divisions (Law Enforcement, Corrections, Civil, and Court Security) provided us with a great head start for reform, because we already engage in many of the practices that are key to the plan. We have already implemented a body camera program and are now recording all our interactions with the public. Over the summer, we launched an extensive recruitment program, reaching out to all the demographics in our county. We have secured funding for a new Records Management System to help us compile more effective data, and then be able to use that information to make data driven decisions within our agency. We have increased our community engagement, redesigned our social media accounts, and launched a brand-new app this year, which provides smart phone users with up to date information, and access to many of our services right from their mobile device.

We also launched an online personnel complaint form to create a transparent and effective way for members of the public to report misconduct by one of our employees.… Other highlights include formation of a Citizen Review Panel, increased training to further address issues of bias, increased engagement of law enforcement with community groups, and increased efforts for racial and gender diversity in hiring.

CP: How do you account for arrests of African Americans on felony charges being greater than their population share, according to the 2010 US census?

Between 2019 and 2020 we already have seen a decrease of 8% in the felony arrests of African Americans in Columbia County, and I hope to see that trend continue. These statistics include all felony arrests made by not only the Sheriff’s Office, but also the State Police and Hudson Police. Since electronic record keeping began in the Sheriff’s Office, and up to 2019, we had made 18,619 arrests, and African Americans accounted for 14% of all arrests by our agency – nearly half of the county-wide averages in 2019.

Columbia Paper: What would you have done differently concerning the alleged assault against Howard Handy at a 4th of July party in 2020 hosted by Columbia County deputy Kelly Rosenstrach and her husband?

Don Krapf: Because the incident is still under investigation I can’t comment on it. But throughout my campaign I have talked about the need for transparency. It is important to get out in front of that and don’t try to candy coat it. If someone in the Sheriff’s Office is charged with a criminal offense, there should be a suspension and internal investigation, at the least a temporary suspension.

CP: Regarding police reforms, what would you embrace and why?

CP: What training in de-escalation does Columbia County law enforcement receive? Do you think it is adequate?

DK: I will beef up de-escalation training and it will be real world training, not computer screening. The objective is to take persons into custody with the least amount of force.

DK: I am 100% confident in Jackie’s abilities. She has immense training and I’ll have her talk about herself.

CP: How would you comply with former Governor Cuomo’s mandate for police reform?

DK: It starts with community. Unlike other law enforcement agencies, we [Columbia County Sheriff] are held responsible by the people. We respond to the people. To be effective, law enforcement should be part of the community. I have reached out to leadership in the Latino, Bangladeshi and Pakistani communities to familiarize our officers with their language and beliefs.

DK: I believe highly in data-driven decisions. In 2021 the question is are we doing better or worse. The numbers show implicit bias. Implicit bias is eliminated by better training. Minorities are under-represented in the Columbia County Sheriff Department. We can do better.