WHEN YOUR FRIENDS ARE SCIENTISTS, you get some funny emails. While driving through semi-rural New Jersey last weekend, near where we both grew up, Randy spotted a huge infestation of kudzu. His photos to me contained vivid images of a vine-covered landscape and a message with seven exclamation points. As a weed scientist, he’s expected to get excited about errant plants, but even John Q. Public knows that “the weed that ate the South” shouldn’t be in Yankee territory.

In the pantheon of problem plants brought here from faraway places, kudzu (Pueraria montana var. lobata) is often the most reviled. Displayed as a wonder of the 1876 Centennial Exposition in Philadelphia, it was initially promoted as an ornamental vine. In the early 20th century, Federal officials, nursery owners and journalists promoted it as a livestock food and soil conservation plant. Farmers weren’t all that enthusiastic, but the government planted three million acres to show off kudzu’s virtues.

Unfortunately, no one considered that the ability to grow quickly, in many soil types, might be a vice. By the 1950s, with kudzu growing up through trees, across fields, and over cars and buildings, awareness of this plant’s monstrous potential become apparent. Growing at a rate of up to one foot per day, and over 60 feet in length, the hairy vines can make mounds eight feet deep. 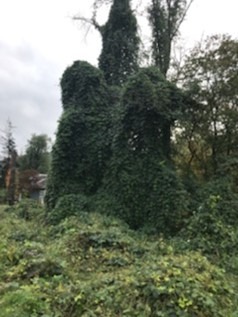 Ooo, what a little kudzu can do. Photo by Randy Prostak

Just how much kudzu now covers America is up for debate. Some projections have gone as high as 10 million acres. The U.S. Forest Service estimate in 2010 was surprisingly low, at 227,000 acres nationwide, while Alabama Extension scientists believe there might be 250,000 acres of it in their state alone. Whether kudzu is waxing or waning is also up in the air. Although many landowners and park managers continue to fight the vines, a few ecologists say herbicides, controlled burns, goat grazing, an insect called “the kudzu bug” and land development are all making kudzu beat a retreat.

And while I’ve always assumed I’m safe from kudzu, since I’m high above the Mason-Dixon in colder country, that isn’t really the case. Fifty-eight sites in New Jersey contain kudzu, with special “strike teams” trying to eradicate it in sensitive places. In the Empire State, kudzu has been found in Rockland, Orange and Ulster counties, as well as Long Island and Staten Island. The NY Department of Environmental Conservation has deployed kudzu survey teams, starting in 2014, and encourages folks to learn how to identify, report, and control it. They remind us that it is illegal to sell, import, purchase, transport, introduce or propagate this species.

Kudzu in Albany? Believe it or not, yes. In 2006, a state forester noticed kudzu growing along a residential street near the Empire Plaza. He notified the New York State Department of Agriculture and Markets, which removed four plants for winter hardiness testing. The remaining two plants were asphalted over for a parking lot, removing the threat. So forget kudzu, at least for now. But have you seen all the oriental bittersweet lately?