HUDSON—Thanks to an alert, concerned postal carrier, an elderly man has gotten the medical care he needed.

On November 15 at around 2:47 p.m., Hudson Police got a call from the U.S. Postal Service reporting that one of their mail carriers was concerned that an elderly man on Aiken Avenue had not picked up his mail in more than three days and she was worried about his safety and well-being.

The officers knocked on all the windows and doors and got no response. They interviewed numerous neighbors and learned no one had seen the man for days.

The officers gained entry to the house through a window. Officer Mausolf found the man lying on the living room floor next to the front door. He was conscious but in need of immediate medical attention. Officers reported it appeared the man was on the floor for a long period of time prior to being found.

He was taken to Albany Medical Center for emergency medical treatment, where he remains.

Adult Protective services and Hudson Code Enforcement are assisting Hudson Police, who have been unable to identify any of Mr. Schuman’s family members. They found no contact information at his home. Anyone who has any information regarding Mr. Schuman’s next of kin is asked to contact the Hudson Police Department at 518-828-3388.

A Hudson woman reported to Hudson Police that she was concerned because her 15-year-old son had not arrived home from school, Monday, November 15 at 5:15 p.m.

Shortly thereafter the Columbia County Sheriff’s Office began investigating a report from a Greenport woman that her 16-year-old daughter had not come home from school either. Both juveniles are students at Hudson High School.

Police agencies responded and coordinated the investigation. Hudson High Student Resource Officer Deputy Zach Sahotra began a search of the school grounds. The deputy was able to find a video that showed the two students, together, exiting the school property headed west toward a wooded area.

At daybreak, Tuesday, November 16, HPD established a command center at their station and initiated various strategies to locate the young people. Detectives checked cell phone information, while patrols conducted interviews and tried to develop leads. Information was put out statewide via the police information network as well as social media. Teams were established to check all possible locations.

One team, made up of Hudson Police Chief L. Edward Moore and Sergeant Nick Hodges was assigned to check along the Hudson River north of the city. At about 9:25 a.m., two miles north of Hudson, the youths were spotted in a wooded area next to the railroad tracks. After a brief pursuit on foot, the youths were taken into protective custody by the officers. They were brought back to an awaiting Greenport Rescue Squad ambulance and taken to Columbia Memorial Hospital for evaluation. They were later released to their parents.

“Despite frigid temperatures and strong wind they were in pretty good shape. They had one thin blanket and a small amount of food with them. After spending the night in some woods adjacent the tracks, they had plans to leave the area. What’s really encouraging was the outpouring of support and information sharing on social media. While young people may get lost and forgotten in a big city, our community banded together to demonstrate that we care, and together we are going to locate these kids,” Chief Moore said in a press release.

Seven people required emergency aid following a fire in the attic of their house at 995 Mitchell Street, November 16 at 5:17 p.m. Hillsdale firefighters and the Community Rescue Squad were dispatched along with NYSEG and the building inspector.

According to a press release, volunteers from the Hudson Valley Chapter of the American Red Cross provided immediate emergency aid to seven people.

The Red Cross provided financial assistance which can be used for necessities such as shelter, food, and clothing to four adults and three children, ages 7, 9 and 16. Volunteers also offered emotional support. In the coming days, Red Cross staff and volunteers will remain available to help those affected by the fire as they navigate the road to recovery.

Firefighters were back in service at 6:41 p.m. 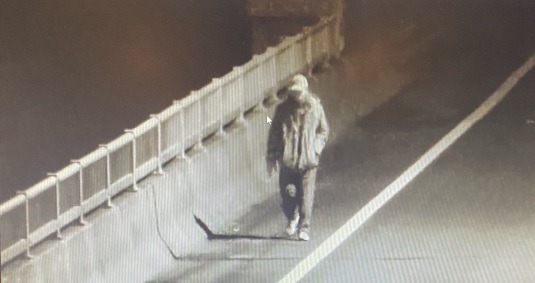 Do you know this man? State Police and Village of Catskill Police are investigating an incident the morning of November 17 on the Rip Van Winkle Bridge, which spans the Hudson River between Catskill and Greenport. Police are attempting to identify the subject in the photo, who was walking on the Rip Van Winkle Bridge at 3:30 a.m. that day. Anyone with information is asked to contact State Police Catskill at 518-622-8600. Police did not release further information about the incident. Photo contributed

HUDSON—Defendants Jonathan Barham and Omar Hassan were convicted by a Columbia County Jury of third degree burglary, a class D felony, and other related offenses in county court before Judge Jonathan Nichols, November 12, according to a press release from District Attorney Paul Czajka.

The men broke into the Citgo gas station on Rigor Hill Road in Austerlitz at 7:20 a.m. Saturday, June 15, 2020, to steal cigarettes, lottery tickets and money from an ATM.

Troopers were able to track the two men down and both were arrested June 16, 2020.

The DA “commended Trooper Moore for making this arrest after a vehicle and traffic stop that utilized amazingly effective police work.”

In the release DA Czajka said, “His arrest and ADA Carty’s conviction stopped a burglary spree that spanned multiple states and increased consumer costs throughout the Hudson Valley, and up and down the eastern United States.”