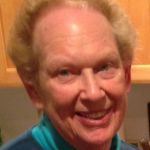 Born January 18, 1933, in Chicago, IL, she was the youngest of four children of O. Robert Perkins and the former Charlene Johnston. The family also lived in Meriden, CT, Hagerstown, MD, and Garden City, Long Island. She was a 1950 graduate of Sewanhaka High School in Floral Park

She attended Antioch College in Yellow Springs, OH, and married a classmate, Richard Cady Montague, just after they graduated in June 1957. She also earned a master’s degree in social work from Fordham University in the Bronx.

After living in New York City for 40 years, primarily in Brooklyn, the Montagues moved to Germantown in 1997. She also served as president of the Germantown Neighbors Association. She and her husband, Richard, were married for 60 years, until he died May 28, 2018.

Mrs. Montague is survived by: her sons, James Montague of Elmwood Park, IL, and Gray Montague of Pittsburgh, PA; grandchildren, Clara Montague of New Haven, CT, Alice Montague of Oklahoma City, OK, Avery Montague of Columbus, OH, and Grace Montague of Portland, OR; her niece, Kathy McGuigan and nephew, Mark Perkins, both of CA. She was also preceded in death by her parents; sister, Margaret (Perkins) Hofer; brothers, John Perkins and Arthur Perkins.

Arrangements for cremation were made with the Burnett & White Funeral Home of Red Hook. Interment will be at the Friends Upton Lakes Cemetery in Clinton Corners. No immediate services or memorials are planned, though a celebration of life event may be held for relatives and friends at a later date.

PINE PLAINS—Michael A. VanTassel, 70, of Pine Plains passed away peacefully November 3, 2021 at home.

He was born in Catskill, November 11, 1950 to the late William and Dora (Lennon) VanTassel.

In 1969, he joined the United States Marine Corps and served honorably until 1975. He then did various carpentry jobs throughout the local area. He also worked as a landscaper and took an interest in flowers and gardening. He was an avid pool player in leagues in both Columbia and Dutchess counties.

Mr. VanTassel is survived by: his three sisters, Shirley Brady of Niskayuna, Lois Bogue of Pine Plains, and Sharlene Wiser of Georgia; his brother, Elwood VanTassel of Catskill and many nieces, nephews and cousins.

Besides his parents he was predeceased by: his brothers, Gerald, William Jr., John and Donald VanTassel and one sister, Marie VanTassel.

In keeping with his wishes no formal services will be observed.

To leave a message of condolence visit peckandpeck.net