That’s why developers want to put the Iron Star Retreat Center on about 150 acres here.

It’s also part of the reason why some residents don’t want it.

The controversial project drew a full house in-person at the Town Hall meeting room plus another 75 people on Zoom.

According to the public hearing notice the proposed retreat center will include the adaptive reuse of an existing residence for a five guestroom inn, and the development of four separate lodging cottages (creek houses) for overnight accommodations, including three separate buildings for associated recreational support uses on the east side of the property.

The development proposed for the west side of the property consists of a “glamping” area with 22 individual camping structures. The inn will also have a restaurant for patrons utilizing produce from the onsite organic farming operation. Recreational amenities for the commercial retreat will include massage, horseback riding, swimming (an indoor pool), exercise and art. The camping use will be glamorous camping (“glamping”) and will be provided in individual cabins and rustic buildings. Organic farming will utilize open space on the site that has been used historically for farming operations and will also include the construction of two farm-related buildings to support produce processing and equipment storage.

Taylor M. Palmer, a partner in the law firm of Cuddy & Feder, with offices in Westchester, the Hudson Valley, New York City and Stamford, CT, represents the applicants and led the project presentation. After giving an overview, he called on several project consultants to speak more specifically about certain project aspects like site ecology, traffic, water and sewer.

Iron Star Founder Stacey Shurgin, president at Leeds Associates LLC, a NYC real estate management and development company, said she has been in Ancram for two years. “I came for the land,” which she found “magical and beautiful.” Since her “background is in building” and she has “no need to keep 150 acres to myself,” she is pursuing an environmentally conscious project. She said none of the new structures can be seen from the road. The project will “help the land” by bringing back farming and livestock and will work with surrounding neighbors.

According to Ms. Shurgin’s LinkedIn page:

“Set on a magical 150 acres in the Hudson Valley—Iron Star retreat—will host guests who search for luxury unpretentious adventures close to home. A short trip up for city dwellers will leave them refreshed and renewed. Hiking, mountain biking, horseback riding and more are just some of the onsite activities. Reconnecting to the land, soil and sky reminds guests how to breathe deep, enjoy themselves and one another. Coming summer 2022…..”

When it came time for questions and comments, Planning Board member Ann Rader noted that an endangered species of cottontail rabbit lives on or near the property. The project landscape consultant said the project includes the installation of brush piles, the creation of 20 acres of naturalized meadow and the planting of 384 mature native trees which should “offset” any disruption to cottontail habitat.

Planning Board member Robert Roche wanted to know whether the center is going to be a year-round operation. The answer was that only some parts would operate year-round. Planning Board member James Stickle wanted to know when the traffic study presented was done. The Department of Transportation study data revealed that 1,100 vehicles travel Route 82 each day, with the single busiest hour being on Saturday morning between 11 a.m. and noon. It was estimated that the center would add 19 vehicle trips with people arriving at different times. The traffic consultant said the study was done in 2019.

Mr. Stickle noted that “we’ve had a tremendous influx of traffic since then.” 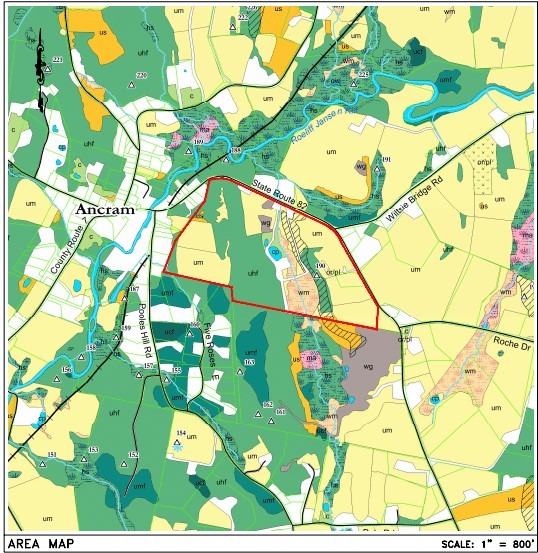 The dozens of public comments included those from:

• Joe Brown, who expressed concern for keeping “community character.” He noted that all the new wells needed to supply water to the center will cause neighboring wells to run dry; that 40 new structures will create the need for a lot of light at night; and delivery trucks will clamor along town roads in the early morning hours. He said the center is not just a major development but the largest development Ancram has ever seen and will likely be the town’s second largest employer. He lamented that none of the center’s amenities: pool, yoga studio or restaurant will be available to the public. “Can we handle this?” he asked, noting, “We have no police.”

• Tina Akin said 33 units will have quite an impact with regard to water and electricity.

*Don MacLean said the change in zoning is in conflict with the town’s Comprehensive Plan. He noted the developers had already removed three residences (mobile homes) from the property. The loss of these residences goes against the town’s longstanding need for affordable housing. He wanted to know if the project had any provision for staff housing, since developers are planning to bring back agriculture—horses, vegetables, dairy. He stressed the importance of providing housing for workers.

A project consultant said there will be two apartments in one of the barns on the property.

• Christine Brown said in light of the project scale some consideration should be given to the financial viability of the project. She wanted to see credentials and know how well-funded the project is.

• Dave Hall also stressed the need for affordable housing, calling it a “national problem.” He said he has a view of the ridge on the project property and does not want to see lighted buildings or hear the noise from constant parties. He said the area is a natural amphitheater and the sound carries.

• Jan Hanvik said he is concerned that the center will not be a good neighbor and said Ms. Shurgin is already advertising Iron Star as coming in 2022. He also went through a long list of bad reviews that her Leeds agency has received from people who live in properties the agency manages.

• David Boice said he was speaking on behalf of the Ancram Fire Company when he noted concerns about effects on traffic, emergency access roads and water supply for fire suppression. He said the fire company would like to “work with the group” and have some input in center alarm systems.

• Sarah Ponkos, a school teacher, said the developers’ math did not add up and the amount of meadow acreage created was far less than mentioned. She said she loves that she can see the stars in the Milky Way; that she has herds of deer and turkeys in her yard and she can walk down to the edge of the Roe Jan Kill. She said she does not want to live in suburbia and wondered what precedent this development would set.

At the end of the hour and a half public hearing, Planning Board Chairman John Ingram said the public hearing would remain open and resume when the applicants make their next appearance, possibly in January.