HUDSON—Columbia County’s 2022 budget calls for a 2% tax levy cut, despite a 10% increase in appropriations. The budget, which the County Board of Supervisors approved December 8, appropriates $170.4 million, of which 25.6% is to be covered by the tax levy of $43.7 million.

The tax levy cut will allow the tax rate for the average county property to drop 6% (from $5.69 to $5.34 per thousand), County Controller Ron Caponera said by phone December 15. But he cautioned that the tax rate is just one factor in determining what tax a property owner pays. Other factors include assessments and municipal equalization rates. 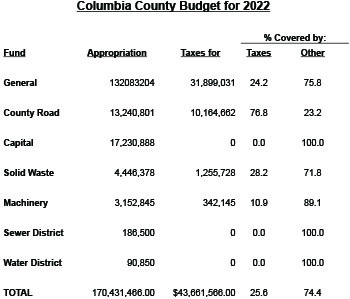 One factor allowing the county to reduce the tax levy is the increase in sales tax revenue from $45 million last year to $49 million this year, according to Matt Murell (R-Stockport), chairman of the County Board of Supervisors, in his cover letter to the budget. He was citing figures provided by County Treasurer PJ Keeler.

Another factor allowing the county to reduce the tax levy has been the high stock market, Mr. Caponera said last week. The county is paying less into the state pension fund for its employees than previously because the pension fund’s investments are contributing more.

At the same time, the county has finished building a new two-and-a-half-mile sewer line serving Commerce Park and is ready to build a new Office for the Aging (OFA) facility and kitchen in Commerce Park, Mr. Caponera reported.

Other appropriations increases are in Solid Waste (caused by increased tipping fees to haul garbage) and Machinery (because of resuming some work temporarily reduced last year).

‘Steps we took last year… are partly to thank for the good shape we’re in today.’

Columbia County Board of Supervisors

“We continue to produce budgets that are in the best interest of all our residents,” said Mr. Murell in his cover letter. “This includes the much-needed services of Mental Healtlh, Social Services, and Public Safety, as well as maintenance of roads and bridges.”

“Steps we took last year… are partly to thank for the good shape we’re in today,” Mr. Murell said.