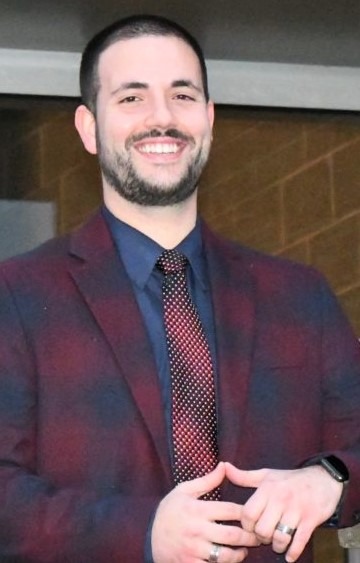 HUDSON—Getting to know the students, the administrators, and the “fantastic arts community,” including the music-making scene, were highlights of William Wood’s two years as associate principal of Hudson High School, Mr. Wood said in a phone conversation November 9. He left the district December 3 to become principal of the Questar III BOCES Columbia Greene Education Center on Route 66 in Greenport.

Mr. Wood was full of appreciation for Hudson City School District Superintendent Maria L. Suttmeier and other officials who supported him as he carried out his duties as associate principal and applied for the Questar position.

He came to Hudson from teaching English and global studies at Canajoharie High School and the Adirondack Academy. At Hudson, he felt lucky to work under Principal Robert LaCasse, who had preceded him as associate principal. Mr. Wood credited Mr. LaCasse with guiding him through the challenges of the fast-paced position. Between discipline, working with students with discipline issues, and restorative programs, one had to know what to prioritize, he said.

Shortly after Mr. Wood began, the Covid crisis hit and for most of his tenure schools have been “trying to navigate something that has never happened before,” he said. “But everybody came together and is working together in order to continue to get students educated as we navigate uncharted waters,” adding that “the students have been incredibly resilient through this incredibly difficult time.”

The past three months have been hard, Mr. Wood continued. Nobody knew what to expect from students being together again. But now, he said, almost all the students are adjusting, although “there’s a small group of students and faculty who are still struggling, and he predicted, “things will get better,” with the schools returning to putting the greatest emphasis on learning rather than health and safety.

Mr. Wood’s time in Hudson also included developing his musical talents and starting a music-making group. “Music tends to bring out a lot of joy in people,” he said. He has been playing instruments since he was eight, and has been active in “many bands in the capital region” recently. At Hudson, he started an instrumental/vocal group consisting of two math teachers, an English teacher, two members of the district Music Department and himself. Scott Vorwald, head of the Music Department, helped establish the group, called The Hudson 6. The group has performed at several school-related occasions since spring 2021. At Homecoming, the student band played its numbers, and the Hudson 6 played its numbers. Mr. Wood expressed hope that the group continues even after he is gone.

As he prepared for his new job, Mr. Wood was also preparing to move into a house in Castleton, with his wife and three children, ages six, four, and one. He said he also would like to get involved in bands.

‘Music tends to bring out a lot of joy in people.’

Mr. Wood said “several strong candidates” have applied to succeed him as associate principal. When asked if he had advice for his successor, he said, “Build relationships. Be receptive to the faculty and their needs.” But he also said, “It’s all about student success and how you get there.”

Mr. Wood said his initial goals at Columbia Greene Education Center will be “to listen a lot,” build relationships, and “garner a sense of how the building operates and how the faculty engages with the students.” Long term, he added, he hopes to help some Career and Technical Education programs grow and to strengthen the bonds between Questar III BOCES and each of the school districts it serves.