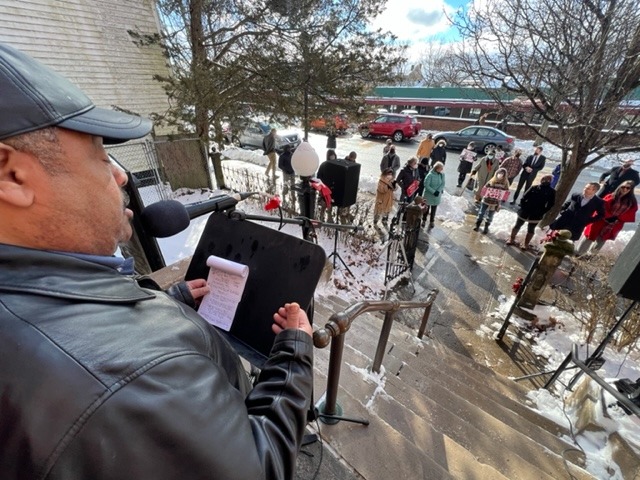 Pastor Alan Williams (l) of the Shiloh Baptist Church in Hudson addresses the gathering at the Rev. Dr. Martin Luther King, Jr. Day rally Monday, January 17 hosted by the Hudson Interfaith Council. The public was invited to join the “It Begins With Me” motorcade and outdoor rally “to help advance the cause of securing voting rights for all Americans,” according to a press release. The motorcade came down Warren Street and ended at the Baptist Church, at 14 Warren Street. This year’s keynote speaker was Rev. Iris Waddell, pastor emerita, Payne AME Church in Chatham, who echoed the theme of the event in her speech, saying “It begins with us” and urging passage of the John Lewis Voting Rights Act. County Democratic Committee Chair Sam Hodge also spoke about the voting rights act. And County Assistant District Attorney and member of the county Republican Committee Ryan Carty spoke about those that are “called to service” by Dr. King. Lisa Edstorm and Pastor Ed Cross also spoke at the event, with Pastor Cross giving the closing prayer for the day. Rev. Kim Singletary, the Interfaith Council chairwoman, spoke and introduced each speaker. Pastor Williams thanked the group for coming and pointed out Dutchess County Executive Marcus Molinaro (R), who is seeking to be the Republican candidate for the seat in Congress currently held by Antonio Delgado (D-19th). Photo by Lance Wheeler