ANCRAMDALE—Jon F. Rocker, 59, of Ancramdale passed away peacefully at his home with his family by his side, Sunday, January 16, 2022.

He was born July 7, 1962 in Great Barrington, MA, the son of the late John and Jane (Rocker) Derrick.

He was a graduate of Taconic Hills Central School and served his country with the United States Army military police from 1981 to 1983 while stationed in Germany.

A self-employed carpenter by trade he also worked as a lab technician for the Schweitzer-Mauduit Paper Mill from 1998 to 2013.

Mr. Rocker was an avid outdoorsman, but above all he was a true family man who cherished time spent with his wife, children, grandchildren, extended family, friends and his beloved canine companions, Tigger and Bourbon. He served his community as a lifetime member of the Ancram Fire Company and a member of the Ancram Landowners Association.

Besides his parents, he was predeceased by two brothers-in-law, James and Edward Schuster.

Family and friends are invited to a memorial visitation Monday, January 24, 2022 from 4 to 6 p.m. at the Peck and Peck Funeral Home, Route 22 in Copake. Practice Covid-19 protocols during visitation and attendees must wear a mask for the protection of all.

A Celebration of Life Luncheon and continued time of sharing will be held Tuesday, January 25, 1 p.m. at the Ancram Fire Company, Route 82 in Ancram.

In lieu of flowers and in Mr. Rocker’s memory, consider making a donation to the Ancram Fire Company, P.O. Box 114, Ancram 12502.

He was born in Austerlitz of parents Minnie and Louis Wambach, Sr., July 12, 1924. He was married for 49 years to Mary Keeler Wambach.

He built his own house on farm property given to him by his parents and his wife Mary still lives in that home. Early on, he worked with his father on the family farm in Harlemville. He later worked several years at WarpKnit Mills in Mellenville and retired from Ockawamick Central School District. He was a proud member of the Columbia County Chapter of the Sons of the American Revolution.

Along the way in his long life, he made many friends and acquaintances who will miss him dearly. He was well-loved and respected by all those he met. He enjoyed telling and hearing a good joke, loved good home cooking, hunting and fishing and gardening. He particularly enjoyed several years wintering in Florida with Mary where he continued his love of old time country music by playing his fiddle with various friends. He played some of his favorites at home with family at gatherings and around a campfire. He always ended a music set playing Amazing Grace, one of his favorite songs.

A private, family-only service will be held at Wenk Funeral Home in Chatham. A memorial service at St. Peter’s Presbyterian Church, Spencertown and interment at Harlemville Cemetery will be scheduled in the spring. In lieu of flowers, donations can be made to St. Peter’s Presbyterian Church or the Spencertown Fire Company. To send online condolences visit wenkfuneralhome.com

Born May 25, 1937 in Heilbronn, Germany, he was the son of Martha Lindenberger and Walter Karl Weber; and the stepson of Wilhelm Kischer, when his mother remarried following Walter’s passing in 1939.

He grew up during the war years in Germany. At the age of 22 he traveled aboard the S.S. United States to New York City. He worked at Pfizer in an administrative capacity, while earning his U.S. citizenship and his engineering degree from City College of New York. He first worked as an engineer with the American Electric Power Service Corporation in NYC. In the early 1970s he accepted a position with the State of New York Public Service Commission and moved his family to Valatie. He retired in 1999 and focused on his true passions—hiking and gardening. He was an active member of the Appalachian Hiking Club, the Adirondack 46ers and Master Gardeners with the Cornell Cooperative Extension. He and Maryann, his wife of more than 50 years, enjoyed attending Albany Symphony Orchestra concerts and the Boston Symphony concerts at Tanglewood on a regular basis. They also maintained an active relationship with and supported the Ghent Playhouse. “Gerry” was a dedicated member of the community and a longtime active member of the Valatie Volunteer Fire Department, serving as its secretary until his passing.

He is survived by: his adopted family, Robert C. and Diana Carruth, their children, Lauren, Adrienne and Robert W. and many close friends, notably among them, Anneliese Lawson, who shared his love of hiking and the outdoors and was so much help and support in his later years.

He was predeceased by: his wife, Maryann Greene Weber and their daughter, Christine Nicole Weber.

Calling hours will be held in the future when it is safe to gather. Burial will be at the convenience of the family. In lieu of flowers, contributions may be made to the Valatie Volunteer Fire Department, Albany Symphony Orchestra and the Ghent Playhouse. Arrangements are under the direction of the Raymond E. Bond Funeral Home, Valatie. 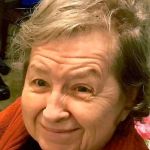 Born August 18, 1944 in Chatham, she was the daughter of the late Albert and Clara (Bailey) Kinnicutt.

She was a press room supervisor at Rielly Mills in Valatie for many years. She was a lifelong member of the First Presbyterian Church in Valatie and was the most caring and sweet woman one could ever meet.

Graveside services in Prospect Hill Cemetery will be private for the family. Memorial contributions may be made to the Valatie Ecumenical Food Pantry, P.O. Box 267, Valatie 12184. Arrangements are under the direction of the Raymond E. Bond Funeral Home, Valatie.

PORTSMOUTH, NH—Ellen Terry Irose was born April 21, 1942 in Newark, NJ, and died May 22, 2021 at Portsmouth Hospital from ongoing heart issues.

She was the daughter of Ira and Mary Zeitlin of West Orange, NJ, she attended Mt, Holyoke College and graduated from Katherine Gibbs.

She married Charles Irose in August 1964 and lived in Chatham for more than 40 years.

She leaves behind: her sons, Mark and Colin; her daughters-in-law, Amelia Burkhart Irose and Erin Bradley Irose; her sister, Robyn Boyd and grandchildren, Meehan, Aldan, Ella and Levi.

She moved to MA, in 2018 to be closer to her children after the passing of her husband, Chuck. She loved working at the Chatham Book Store and was known for her ability to find everyone the right books for them. She was on the board of Crelin Park for many years and was instrumental in writing the grant that allowed the park to expand its ability to meet the community’s needs with new fields and running paths.

She also worked as the administrator at Spencertown Academy and with her sister at Wooden Ship Productions, a traditional music agency. She loved to travel, her grandchildren and her friends in Chatham and is missed by all who loved her.