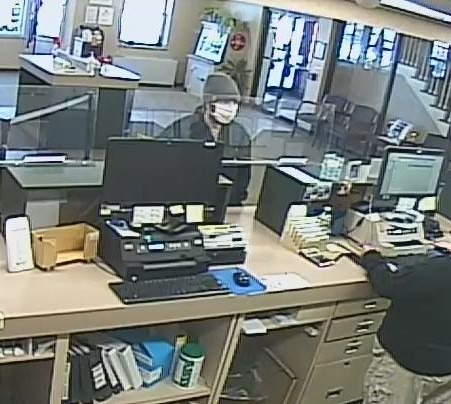 Photo of a robbery in progress at the Warren Street Trustco Bank. Police surveillance photo

Arriving officers discovered the bank had just been robbed.

According to a press release from Hudson Police Chief L. Edward Moore, the suspect walked into the bank and handed the teller a note demanding cash. Upon receiving the money, he exited the building through the rear door. It is unknown if he fled on foot or into a getaway vehicle. No weapon was displayed.

The suspect is described as a 6-feet-tall, light-skinned. He appears to be in his 30s, dark hair, beard and average build. He was wearing a grey knit hat and a navy blue hoodie with an emblem on the left chest.

Officers were backed up by units from the Columbia County Sheriff’s Office as well as the State Police.

Troopers, who also assisted with a K-9 tracking dog, remained to assist with processing the crime scene. Detectives and officers are reviewing video and conducting interviews throughout the city.

Anyone with any information about the crime should call detectives at 518-828-3388. 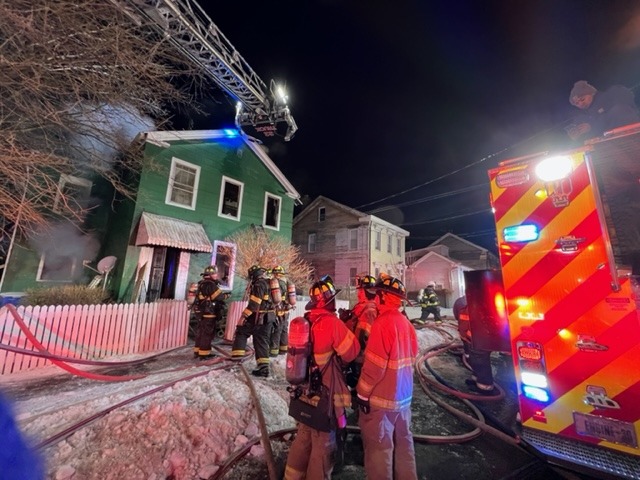 Hudson firefighters along with four other fire companies work at the scene of a structure fire at 231 Allen Street the night of February 5. Photo by Lance Wheeler

HUDSON—Firefighters from Hudson with mutual aid from Greenport, Claverack, Catskill and Athens along with the Greenport Rescue Squad were called to a working structure fire with possible entrapment at 231 Allen Street, February 5 at 7:19 p.m.

According to a report on the Hudson Fire Department’s Facebook page, when firefighters entered with hose lines to search for occupants, they discovered “heavy smoke and fire in a 2 1/2 story, wood frame residential dwelling.”

Firefighters ventilated the roof, ran a five-inch hose line around to the rear of the structure and forced entry. Scene lighting was set up and a crew went to work extinguishing the fire inside the building.

All visible fire was knocked down within 20 minutes, and primary and secondary searches were complete and negative. Hudson Police removed one occupant from the structure earlier, who was taken to Columbia Memorial Hospital.

Fire crews performed extensive overhaul and all units were cleared and back in service at 11:10 p.m.

Stottville, Germantown, and Chatham stood by at the Hudson Central Station and while there were summoned to 41 North Second Street, the sixth floor of the Bliss Towers high rise at 8:14 p.m. for an indoor smoke condition.

Food was reportedly left burning on the stove. Firefighters ventilated the building ventilated. One patient was taken to CMH.

At 9:17 p.m., they additionally handled a personal injury auto accident at the intersection of Sixth and Columbia streets. Stuyvesant stood by in their own quarters with their FAST Team. Hudson firefighters thanked all who provided mutual aid including Hudson Police, Hudson City DPW, Columbia County 911, Greenport Rescue Squad, and National Grid.