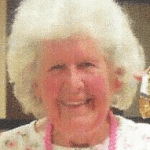 Born in Elizaville, May 12, 1924, she was the daughter of the late Peter and Stella (Kasuba) Kosmaczewski (Kosmo). She was the beloved wife of Metro F. Chuckta for 50 years. He predeceased her in 1998.

She graduated from Germantown High School and Albany Business College. She was employed by Hooper Holmes Credit Bureau and later the NY Telephone Company as a secretarial stenographer.

She was very active serving as a past president of the Watervliet Lodge of Elks Ladies Auxiliary and a charter member of CAPPS (Capital District Area Past Presidents Society). She volunteered with the Watervliet Elks at the Stratton VA Medical Center for many years. She served as an inspector for the Board of Elections in the Town of Sand Lake for many years.

She enjoyed being a homemaker, working on her flower beds, gardening and yardwork.

Her funeral Mass will be held privately Thursday, March 3 for her family at St. Henry’s Church in Averill Park. Interment will follow in St. Nicholas Cemetery in Maplewood.

In lieu of flowers, contributions may be made to the Watervliet Lodge of Elks #1500 Major Projects, 501 4th Avenue, Watervliet 12189. 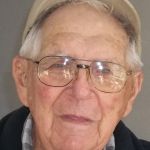 Born December 6, 1932 to Lester and Bertha (Balogh) in Copake, he was raised until the age of nine in Connecticut, then returned to Copake to live and work on his grandfather’s farm, because he loved the country life. After marrying Joan McCumiskey in 1956, he started his own bulldozing and excavating business, as well as worked part-time for the Copake Town Highway Department for 10 years. During this time he was captain of the Copake Community Rescue Squad, a captain and then commissioner of the Copake Fire Department.

In 1974, he won election as Copake Town Highway superintendent, a position he held proudly for 24 years. After his retirement he devoted himself to his true passion—woodworking. Many friends and family were recipients of his creations.

He is survived by: his partner of 30+ years, Margaret “Peggy” Edelman; his daughters, Barbara and Patricia; son, Michael; brother, Pete (Dotty); nieces, Tammy, Lori and Rebecca, all of Bethel, CT, and his beloved German Shephard, Shannon “Shannie.”

He was predeceased by: his parents; his brother, David; sister, Lorraine and niece, Heather.

Calling hours will be held Sunday, March 6, 2022 from 1 to 4 p.m. at Peck & Peck Funeral Home, 8063 Route 22, Copake. There will be a spring interment at Copake Methodist Church Cemetery at the family’s convenience.

Memorial contributions may be made to Columbia-Greene Humane Society, 111 Humane Society Road, Hudson 12534 or the Copake Fire Department, 390 County Route 7A, Copake 12516. Express condolences at www.peckandpeck.net.

HUDSON—Janice E. Myers passed peacefully through God’s grace, February 27, 2022 with her two daughters by her side. She was a lifelong Hudson resident and secretary for the Columbia County Youth Bureau for nearly 30 years. As a young woman, she worked as a secretary for McCall’s and Foster’s Refrigeration after graduation from Hudson High School in 1952.

Dedicated to her family, friends and faith, Mrs. Myers was a lifelong member of St. John’s Lutheran Church and later Emmanuel St. John’s Lutheran Church. In her youth, she was actively involved in a local women’s bowling league, Junior Service League, and contributed many hours to church functions and fundraisers. She enjoyed coffee and conversation with cherished friends, Sunday dinners with family and impeccably caring for her home.

She was predeceased by: her beloved grandson, Jeffrey R. Taylor; her parents, Richard G. and Esther L. Stickles; her siblings, Richard G. Stickles, Jr., and Terrence J. Stickles; and lifelong friends and loved ones.

Calling hours will be at the Bates & Anderson – Redmond & Keeler Funeral Home, 110 Green Street, Hudson, Thursday, March 3, 2022, 4 to 7 p.m. All are also invited to the funeral service March 4, 2022, 11 a.m. at the funeral home. Interment will follow at the Mellenville Union Cemetery.

All who knew Mrs. Myers are welcome to a Celebration of Life at Kozel’s Restaurant in Ghent, following interment.

She was a devoted and quiet contributor to many charitable organizations, and in lieu of flowers, the family requests donations to one’s favorite charity in her honor.

CLAVERACK—With his life journey on this Earth complete, James Gerald Nielsen of Claverack departed this world February 28, 2022, after suffering a long, heartbreaking decline from Alzheimer’s disease.

Affectionately known as “Jim,” he was born April 1, 1938 in Yonkers to the late Theodore Julius Nielsen and Lillian (Brunges) Nielsen. He was predeceased by his older brother, Theodore “Skip” Nielsen.

He attended elementary school at Hartsdale Public School #7 and later Pocantico Hills Central School. He was a graduate of the class of 1956 at Washington Irving High School in Tarrytown. From his classroom window he observed the construction of the Tappan Zee Bridge.

Soon after high school, he enlisted in the New York Air National Guard then located at the Westchester County Airport. He served from 1957 to 1962 as a jet engine mechanic with the rank of A1C and received an honorable discharge.

He married his high school sweetheart and love of his life, Karen Louise Hartson, March 16, 1960. He would affectionately refer to her as his “Sweet Swede.” The happy couple raised their four children in their hometown of Elmsford until moving to Claverack in 1981.

He was a proud member of the Teamsters Union Local 456 in Elmsford, driving for a variety of construction companies throughout Westchester and later in Columbia County. He retired from truck driving in 1996.

Never one to stay idle, he was an active volunteer fireman with the Churchtown Fire Department for more than 20 years. He also had many hobbies and interests including his lifelong love of model trains and cars. As a young man he enjoyed restoring antique cars, attending antique car meets, and belonged to the Antique Car Club. He was also an accomplished gardener who found joy in sharing his produce with everyone. His specialty was growing a variety of garlic. He liked deer hunting and making woodworking gifts for friends and family. He enjoyed relaxing evenings with Karen, having their favorite drink, playing card games, and doing puzzles.

He was always an outgoing and personable man with a good sense of humor. His friendly smile and hearty laugh were part of his good-natured personality.

Home, 110 Green Street, Hudson. Immediately following funeral services the family invites all who attend to a luncheon at Kozel’s Restaurant.

Donations to be made to the Churchtown Fire Department.