She was always young at heart and never saw herself as getting older. She would look at photos of herself and say with a chuckle, “Who’s that?” She had a gift of storytelling, and a spicy sense of humor that sometimes left one guessing what she meant by that. A loyal friend through and through, if someone told her a secret, it was in the vault forever. Her love for her family and friends was unconditional, and her resilience, strength and guidance taught those around her they can get through anything no matter what. Her many quotes confirm that. She loved many things, especially strolling down Warren Street looking for trinkets and clothing. She enjoyed books, horror movies, a good glass of wine, and naps. She also enjoyed board games, telling stories of her youthful adventures, and giving worldly advice.

Her family thanks Columbia Memorial Hospital, all the doctors and nurses, and the Greenport Rescue Squad, and to Donna Coons whose commitment and care for her was immeasurable.

To honor her wishes, there will be no services. Her wish was to have a drink, tell a story, help a stranger in need, and give time to a local charity.

She grew up in Watervliet, where she graduated from Catholic Central High School in 1955. Upon graduation, she enlisted in the United States Navy, where she honorably served until 1959. While in the Navy, she also attended Texas A & I in Kingsville. Her career included working at the Pocketbook Factory, Atlantic Knitting Mills, and Emsig Corp. She loved sports, especially the New York Mets, and Notre Dame Fighting Irish Football.

Visitation hours at the Bates & Anderson-Redmond & Keeler Funeral Home were March 28 followed by a prayer service. 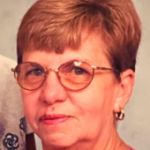 Born August 17, 1937 in Hudson, she was the daughter of the late Frances Elizabeth (Miller) and William Parsons Boright.

She grew up in Chatham, graduating in 1954 from Chatham High School.

She was part of the cheerleader squad. After school she attended Mildred Elley, where she earned a certificate in their secretarial program.

She worked for many years, holding several jobs. She was a secretary at New York State Electric and Gas, a school bus driver for Chatham School District, a letter carrier for the Valatie Post Office, a sales associate at Chatham Jewelry store, and an administrative assistant at Goold’s Well Drilling.

In her younger adult years, she was actively involved in a Women’s Bowling League at Chatham Bowl and was also a member of the Tri-Village Fire Company Ladies Auxiliary. In her later years, she volunteered as the secretary/treasurer for the Chatham Center Cemetery for many years.

Her favorite pastime was watching baseball, something that she did often with her father as a little girl. She enjoyed puzzle books and knitting.

She was predeceased by her sister, Jane Colby and Jane’s husband Roy.

In lieu of flowers, memorials are suggested to the Columbia-Greene Humane Society, 111 Humane Society Road, Hudson 12534, or another local ASPCA. Condolences may be conveyed at frenchblasl.com

LINLITHGO—Rosemary Ruocco, 90, of Linlithgo died peacefully at home Saturday, March 26, 2022 in the company of her loving family.

Born June 14, 1931, she was the daughter of the late William and Catherine (Stuber) Higgins. She was a homemaker and loving mother and grandmother.

She will be greatly missed by: her sons, Michael (Kathy) Ruocco, Joseph (Angela) Ruocco, William (Joanne) Ruocco; daughters, Rosemary (Joseph) Palumbo, Louise (Daniel) Conklin, Angela (John) Somma; daughter-in-law, Vicki Ruocco; many grandchildren and great-grandchildren. She was predeceased by her beloved husband, Angelo M. Ruocco in 2000; her son, Martin Ruocco and sister, Catherine Yengel. Calling hours will be Thursday, March 31, 2022 from 10 a.m. to noon at the Sacco Funeral Home, 700 Town Hall Drive, Greenport followed by a Mass of Christian Burial at the Holy Trinity Parish-Church of the Resurrection, 9 Church Street, Germantown, 1 p.m. Burial will follow in Linlithgo Cemetery. The family thanks the dedicated and caring staff of Community Hospice as well as her home healthcare workers. She was born to the late Victor and Gladys Vail, bakery owners in Kingston, March 20, 1931. She graduated from Kingston High School in 1948. She married her high school sweetheart, Wally, November 13, 1949 in Monroe. In 1958, the couple moved to Chatham, and together owned the Chatham Bakery & Coffee Shoppe for more than 40 years. Mrs. Steward also owned Rainbow Acres Miniature Horse Farm in Ghent for eight years. She was blessed with a large and loving family.

She had a gusto for life. She always greeted people with a lipstick smile, she loved chatting with anyone and being social. Mr. and Mrs. Steward traveled the globe after retirement. She enjoyed playing cards with her friends, afternoons at the casino and spending time with her family.

Calling hours will be Saturday April 2, 2022 from 10 a.m. to noon with a funeral service following at noon from the Wenk Funeral Home, Chatham.

Donations may be made in her honor to The Community Hospice Foundation, 310 South Manning Boulevard, Albany 12208 and Columbia-Greene Humane Society, 111 Humane Society Road, Hudson 12534. For online condolences visit wenkfuneralhome.com

He was a graduate of Pine Plains High School. For years he was a self-employed carpenter, it was a profession he was talented at and enjoyed. When not working, he was an avid outdoorsman, enjoying the spoils of nature and the wildlife that inhabited it.

Mr. Hoffman is survived by: his son and daughter-in-law, Jamie and Melissa Hoffman; his daughter, Nicole Hoffman; one sister, Mary Ella Wesley; numerous nieces and nephews, as well as three grandchildren whom he adored: Megan, Mason, and Samson.

He was predeceased by his parents; one brother, Harry B. Hoffman and two sisters, Helen Swart and Erna Miclette.

There are no calling hours, and arrangements are under the care of the family and Peck and Peck Funeral Home of Copake. Born August 23, 1942 in Ludlow, Vermont, to the late Charles and Mildred (Holcomb) Wilkins, “Kathy” was a 1960 graduate of Black River High School in Ludlow.

She and John Todd Starks were married from September 1963 until his death in December 2007.

During their marriage they owned and operated Starks Restoration and Rental in Chatham. She became very talented at hanging complicated patterned wallpaper. She also enjoyed restoring old furniture to its original splendor. In her younger years bingo beckoned her often.

Shopping at thrift shops, flea markets and yard sales was her hobby. She loved a bargain except when it came to coffee. It was Folgers with her Pall Mall or it was nothing.

Her true passion was her family, immediate as well as he large extended family. Her love and unending generosity were her trademark. Her fierce independence paved the way and was a great example for future generations. Her death is a huge loss to all. “There was only one Kathy.”

Surviving are: her children, Donald Starks, Sr. (Mary VanAlstyne) and Laurie Johnson, both of Chatham. She was predeceased by her daughter, Tammy in 2013.

She will be missed by 10 great-grands and a host of nieces, nephews and cousins.

She was predeceased by brothers, Donald and Albert Wilkins; sisters, Doris and Delores Wilkins; lifetime friends, Ana-Mae, Maria and Arlene (“The Coffee Klatch.”)

Graveside services will be announced. In lieu of flowers donations in her memory may be made to Our Community Cares, 25 Hudson Avenue, Chatham 12037 http://ourcommunitycarescc.org/. Condolences may be conveyed at frenchblasl.com

He was a lifelong resident of Columbia County. For more than 60 years he was president and broker of the insurance firm his father Luther founded in 1931. Fingar Insurance Agency continues to this day under the leadership of his sons and grandchildren.

Devoted to his community and charitable organizations, his involvement was immeasurable. He is a longtime member and past president of the Germantown Lion’s Club; past commodore of the Catskill Yacht Club; member of the Roe Jan Boat Club; elder, deacon and vice president of the Reformed Church of Germantown; past director of the Columbia County Chamber of Commerce; life-member of Germantown Fire Co.; member of the Germantown Planning Board, Columbia Memorial Hospital Board of Directors, and the Columbia Memorial Hospital Foundation. Mr. Fingar was also a member of Hudson Widow’s Son Masonic Lodge #7, and was honored in 2003 as Distinguished Citizen of the Columbia County Association in the City of New York.

He was predeceased by his wives, Constance (Haines) Fingar in 1981, and Martha (Schulz) Fingar in 2013, and a brother, David Fingar.