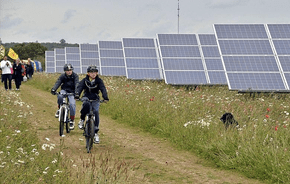 Bike riding or hiking through a solar field? It might happen in Craryville. Photo contributed

COPAKE—The working group recommendations are in and Hecate Energy says it has already worked most of them into the company’s Shepherd’s Run solar project.

For the past several months, a working group of people on all sides of the controversial proposed Hecate Energy 60 MW Shepherd’s Run solar facility in Craryville, have been meeting to come up with a list of recommendations for how Hecate “can do better by Copake.”

Hecate Energy, a Chicago-based developer of solar and wind facilities and energy storage projects proposes to build a solar-powered electric generating facility with 200,000 solar panels on several sites along state Route 23 and county Route 7 in and around the Copake hamlet of Craryville. The site is east of the Taconic Hills School District and north of Copake Lake.

The industrial-scale project is not permitted under Copake Zoning Law, yet it is moving forward because Hecate has bypassed local law and is seeking site approval from the New York State Office of Renewable Energy Siting (ORES) under the state’s new siting process for renewable energy projects, known as 94-c.

Representatives from the Columbia Land Conservancy (CLC), Scenic Hudson, Friends of Columbia Solar and Sensible Solar for Rural New York were all part of the working group, each with a particular point of view and focus for how the massive facility, made up of 220 acres of solar panels on a total 880-acre project area could be improved.

The working group shared their recommendations with Hecate in early February and on February 17 hosted a public presentation online.

According to the slide presentation accompanied by commentary from multiple speakers, CLC’s interests are in preserving the site ecology: wetlands, natural resources, the Taghkanic Creek and wildlife habitat.

Friends of Columbia Solar favors “the grid-scale project” as an indispensable solution to climate change, at the same time is “pushing Hecate to do more for Copake.”

The one thing they all agreed upon was that “Hecate’s Shepherd’s Run must be the best it can be for Copake’s environment, agriculture, residents and economy—while contributing significantly to New York State’s goal of 100% clean power by 2040.”

One speaker made it clear that the group represents the community while Hecate is across the table.

The group gathered feedback from local residents during 2021 and acknowledges that Hecate has made improvements to its initial proposal, such as reducing the inside-the-fence acreage and removing battery storage from the project. Hecate has also pledged to use wildlife-friendly fencing instead of chain link and not use panels from suppliers who use forced labor or contain PFAS and to hire and purchase locally when and here feasible.

The group proposes the following improvements to Shepherd’s Run:

*Protecting homeowners by using scenic screening to integrate panels and views, monetary compensation for nearby homeowners and decommissioning panels

The community-accessible greenspace mentioned includes more than 300 acres with a polyculture park dedicated to the production of energy, culture and food for humans and wildlife. There could be community garden opportunities in the buffer areas around the panels, new walking trails and small parking lots, according to the groups’ slide show recommendations. The trails should allow visitors to explore the panels and area wetlands as well.

The group wants Hecate to relocate panels to avoid cutting large areas of trees and shrubs, as well as not disrupt areas of active agriculture. They want a certified forester to review any tree-cutting activity.

To see the presentation in its entirety and get more details, the working group has launched a new website: Craryville Gateway (www.craryvillegateway.org) where the slides, complete with maps and photos, and a video recording of the February 17 presentation are available to view.

The public is invited to provide feedback on the group’s presentation and the solar project via .

Speaking at the start of the working group’s presentation, Copake Supervisor Jeanne Mettler said that since having a five hour meeting with Hecate last fall, the solar developer “has made a few concessions to the Town” such as the substituting the animal-friendly fencing for chain link and improving the type and quantity of its plantings for screening purposes.

“But Hecate is still planning to cut 40 acres of trees and install 228 acres of solar panels virtually in people’s front yards and on prime farmland.”

She noted the presence of the entire Town Board at the presentation, eager to listen and hear details of the group’s report. She “applauded the working group for coming together to build consensus, even though some of you came from very different positions.”

The supervisor said she and the board are grateful that group members “care enough about Copake to put in long hours and engage in difficult conversations in order to propose a path forward.”

The success of the group’s efforts in the end will not depend on good intentions, hours worked or farsightedness of vision, she said, but “will only be measured by the extent to which you convince [the] state to pass legislation which respects rural towns and the value of local habitat and character and… the extent to which you convince Hecate to actually address the demands made by your proposal. It is too late for lip service. We want to see actual modification of their plan.”

Mr. Campbell referred The Columbia Paper to http://www.shepherdsrunsolar.com/working-group/ to review a long list of “the commitments Hecate has made related to the Working Group’s suggestions and the changes we’ve integrated on the project to benefit the community over the past two years…”