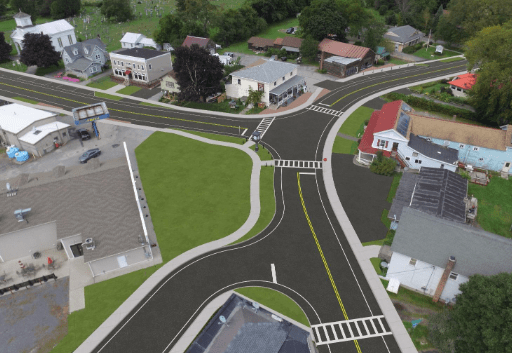 COPAKE—It’s a multi-million dollar fix-up project for the Copake hamlet that has been talked about for 20 years and while construction is still a ways off, now is the time for Copake residents to say what they think about it.

It’s called the County Route 7A Reconstruction and Preservation project.

The session video and a Powerpoint presentation about the project can be found on the Town of Copake website at townofcopake.org.

The project involves the reconstruction of 1.75 miles of County Route 7A through the hamlet starting at Center Hill Road and continuing out in a Y-shaped formation to the north and south entrances to the hamlet on state Route 22.

The project will be paid for with federal, state and county funding. Back in 2018 Columbia County committed $4.5 million to the project. Though town funds are not required for the basic project, Copake has been putting aside money in a capital reserve fund for extra amenities such as park benches or street lights not paid for by the federal, state or county funds, Town Supervisor Jeanne Mettler said at the beginning of the information session. She also recalled that former county Department of Public Works commissioner, the late Dean Knox, a Copake native, championed the project and vowed not to retire until the project was done. Mr. Knox died unexpectedly in 2021. She said the town will miss Mr. Knox when it comes time to cut the project ribbon. The project will be overseen by the State Department of Transportation and start in spring 2024 with completion in the fall 2024.

Columbia County sought qualified engineering consultants in August 2019 and selected GPI in March 2020. But Covid slowed everything down.

Through the years the project goals have remained consistent:

*Improve pedestrian facilities, such as sidewalks, for a walkable community

Ms. Kinley noted that county Route 7A has been resurfaced and rehabilitated many times resulting in concrete pavement core depth variations on Main and Church streets from 4 to 12 inches.

Slides of the existing pavement surfaces showed alligator and other types of cracking, drainage issues such as ponding and potholes.

Church Street currently varies from 23 to 25 feet wide; Main Street to Route 22 North is 27 feet wide and County Route 7A South is 26 to 28 feet wide. The engineers propose to make all streets involved 28 feet wide including two 10-foot travel lanes along with two 4-foot shoulders (one on each side). There will be 5-foot wide sidewalks along Church and Main Streets as follows:

Engineers spoke about the process/tools for how they propose to reconstruct the road surfaces, install curbing and high visibility crosswalks, improve drainage and reconfigure several intersections.

Of particular interest is the Copake Memorial Clock intersection which will be reconfigured into a T-formation and may or may not involve moving the venerable clock and associated war monuments from the middle of the intersection a short distance south to a grassy public area in front of the Clock Tower Grill.

Also notable is that all pull-in-type parking, such as at the wine works, the general store, the deli and the pub will be eliminated because, according to Vehicle and Traffic Law (VTL), it is not safe. “No driver shall back a vehicle unless the movement can be made with safety and without interfering with other traffic and then only after yielding the right-of-way to moving traffic and pedestrians,” according to VTL Chapter 71, Title 7, Article 32, Section 1211.

Engineers also noted that “of 10 multi-vehicle accidents from March 2018 to February 2021, 6 accidents between the deli, general store, and pub were caused by unsafely backing.”

Other traffic laws currently being violated include:

*No parking within an intersection

*No parking within 30 feet of a stop sign or 20 feet of a crosswalk, whichever is greater

*No parking on Empire Road for 500 feet from County Route 7A.

The engineers propose to create on-street parallel parking throughout the hamlet in 15-minute to 2-hour parking zones between 8:30 a.m. and 5:30 p.m. daily.