HILLSDALE—Mark Fisher, born May 23, 1954, passed away suddenly May 2, 2022. He was a singer/songwriter who shared his time between Hillsdale and Washington Heights, NYC.

He was the son of Ann Sharp and Edwin Fisher, a famed cartoonist whose works were published in The New Yorker magazine for 50 years as well as Punch and other publications. He was an accomplished singer and musician who particularly enjoyed performing the great American Songbook and classics of the 1960s, ‘70s and ‘80s at venues in the Berkshires and New York City.

His family and friends will remember him as a gentle, generous, beautiful soul, always ready to offer support, encouragement and a kind word. He leaves behind his wife of 38 years, Dominique “Shelly” Strandquest; many loving cousins; nephew and nieces; friends and fellow travelers. A memorial service will be held at The People’s Pub, 36 Main Street, Chatham, Friday, June 24, 2022, 5 to 8 p.m. Donations in his memory may be made to the National Suicide Prevention Lifeline  https://suicidepreventionlifeline.org/donate/ 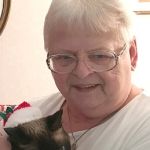 PHILMONT—Frances J. Wilcox of Philmont passed away peacefully at her home, May 29.

She was born February 17, 1947 in Brooklyn to Joseph and Helen Skabowski. She was a graduate of St. Mary’s in Hudson. She was married to her husband, Stanley for 55 years and raised two children, Stanley, III, and Frances Ann. She enjoyed many years of sailing on the Hudson River and cruises to the Caribbean with family.

She is survived by: her daughter; seven grandchildren and one great-grandchild. There are no services. Per her wishes her ashes will be scattered at the Jersey shore where she vacationed for many years. To send online condolences visit wenkfuneralhome.com

Born January 15, 1957 in Hudson, she was the daughter of the late Rosalind and David Meisner.

She was a graduate of Hudson High School Class of 1975 and attended SUNY Albany and SUNY Plattsburgh. She worked for a short time for New York State in Schodack. She grew up and lived on her beloved Meisner Farm, where she cultivated strawberries and vegetables, as well as, worked at the Meisner’s Farm Stand and all aspects of the dairy farm.

Her interests included, but were not limited to, flower and vegetable gardening, cooking, painting, hiking, nature and animal care. Her life was devoted to her family and the animals she cared for.

CATSKILL—Nancy J. Bohnsack, 72, of Germantown passed away Sunday, May 29, 2022 at the Green Meadows Nursing Home after a courageous battle with cancer.

Born July 15, 1949 in Rhinebeck, she was the daughter of the late Brewster and Catherine (Roberg) Berrian.

She was a graduate of Roosevelt High School. She married Joel Bohnsack, who predeceased her in 2015.

For many years and until her retirement, she worked for the Dutchess County Sheriff’s Department in Poughkeepsie.

She enjoyed traveling and one of her favorite locations was Jackson Hole, WY. She also enjoyed fishing, crafting and spending time at the casinos.

A graveside service will be private at the Germantown Reformed Cemetery, Germantown.