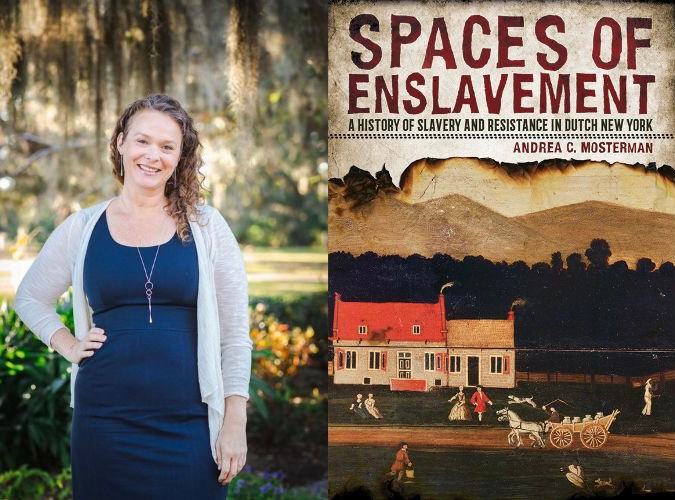 Professor Andrea C. Mosterman PhD and the book cover of “Spaces of Enslavement: A History of Slavery and Resistance in Dutch New York.”

HUDSON—The Hudson Area Library and Leisler Institute co-sponsored an in-person presentation, “Spaces of Enslavement: A History of Slavery and Resistance in Dutch New York,” by Professor Andrea C. Mosterman PhD Friday, May 20. Ms. Mosterman is an associate professor at the University of New Orleans. Her areas of expertise are Atlantic history and early American history.

Ms. Mosterman, a Netherlands native, said that her local education included slavery in the United States but did not disclose the role of the Dutch West India Company in the slave trade and early settlement of New Netherland (New York).

The presentation included slides and the first one shown was “Maison des Esclaves” located in Senegal on Goree Island, where captured Africans were held before transport to the “New World.” The slide pictured three doors. The first door is the point of entry and the second door leads to a holding area. The third was known as the “door of no return.”

Africans could be held at the Maison des Esclaves for a few days up to several months until a ship was ready to sail with its human cargo. Ms. Mosterman, who visited Goree Island in July 2010, described the facility as having “thick walls” that let in only “a sliver of light.” She added that conditions were “unsanitary.”

Ms. Mosterman said that she felt “physically ill” during her visit. She admitted that reading printed materials about slavery did not evoke the same gut reaction to its horrors as her visit to the Maison des Esclaves. The transformative visit inspired her to research and visit physical spaces of enslavement in New York focusing on Ulster, Albany, Kings and New York counties.

The point of entry to New Netherlands for Africans was New Amsterdam, what is now known as the Lower East Side of Manhattan. The Dutch West India Company was hheadquartered on South William Street and controlled several blocks in that area, which included a tavern, courthouse, church and various lodgings.

Professor Mosterman noted that in the early 1700s there were no codified restrictions on the movements and conduct of enslaved persons, adding that Africans used this lack of codified behavior to their advantage. As an example Ms. Mosterman noted that in 1624 eleven African men sued for their freedom and in some instances, also, sued whites for wages owed to them.

However, as slavery expanded, restrictions were imposed. In 1682 enslaved persons could not leave properties without written permission. In 1702 a comprehensive act regulating slaves was adopted.

The Society for Apprehending Slaves was founded in Ulster County in 1792 to prevent self-emancipation. Any white person could stop a black person and demand proof that the person could be in a given space. Ms. Mosterman added that whites were paid a $15 fee for turning in blacks without papers.

She also talked about the role of Dutch Reform Churches in marginalizing free Blacks and enslaved people. In 1788 the congregants of the Reverend Peter Lowe in Brooklyn penned a letter requesting that Blacks be denied full membership.

A slide of the letter, provided by the Brooklyn Historical Society, listed several reasons: “Negroes have no soul”; “They are descendants of Ham”; “They are a species very different from us—witness their nauseous sweat, complexion, manners. I cannot endure them near me. I would be ashamed to commune with them.” Ms. Mosterman noted the irony of the last objection, saying, “… despite having slaves living in their homes, taking care of their children.”

Ultimately Dutch Reform Churches imposed separate worship areas for Blacks that generally were so removed as to be out of sight and hearing of the services.

The Society for Apprehending Slaves was founded in Ulster County in 1792.

Professor Mosterman also noted that the spaces designated for the enslaved in owners’ homes were “small cellars behind walled-in courtyards without direct access into the house” that afforded easy surveillance of the occupants’ activities. She cited Albany’s Schuyler Mansion, which housed “10-plus enslaved people” as an example. She, also, quoted from “The Narrative of Sojourner Truth,” who described such spaces as having “dirt floors, very little light” and the kitchen, which made the space “very hot” in the warmer months.

Professor Mosterman concluded her presentation addressing the fallacy of claims that the system of slavery practiced by the Dutch in New York was somehow more humane than the practices in the South. A slide showed an excerpt from James Fenimore Cooper’s novel, “Satanstoe,”

Our system of slavery was strictly domestic. . . . Among the Dutch,

in particular, the treatment of the negroe was of the kindest character,

“Enslavement is enslavement,” said Ms. Mosterman. She, also, noted that New York did not abolish slavery until one generation before the Civil War and that slavery was practiced in New York for 200 years compared to 100 years in Georgia.

Professor Mosterman’s presentation was one in a series co-sponsored by the Hudson area Library and the Leisler Institute. Her book, “Spaces of Enslavement: A History of Slavery and Resistance in Dutch New York” is available for purchase at the Spotty Dog bookstore on Warren Street in Hudson and is on loan at the Hudson Area library on North 5th Street.