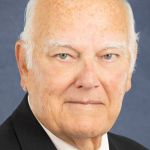 “Bob” graduated from Wakefield High School before enlisting in the Army. In 1963, he returned home and began pursuing his bachelor’s in business administration from Boston University. In 1966, he married Sally Porteous and together they enjoyed 55 years of marriage.

Mr. Hopkins was a business owner, and community member of Hillsdale for most of his life. He was the principal broker at the Roeliff Jansen Insurance Agency for years, until deciding to slow down. He then sold the agency to Bostwick Insurance Group and served as vice president under Craig Thorn. He later went to work as an associate for Metzwood Insurance in Chatham until his retirement in 2021.

He was active in the community as well. He was a past president for two terms with the Roe Jan Lions Club, served on the Hillsdale Zoning Board of Appeals and was a life-member of the Hillsdale Fire Company. He was an avid golfer and longtime member at Columbia Country Club. He played as regularly until his back prohibited him from the game. He also enjoyed his Monday night card game with his cronies, right up till last week. He was also an avid reader, who enjoyed doing crossword puzzles; a good man, with simple tastes. His greatest joy was spending time with his family of which he was so proud.

Mr. Hopkins is survived by his wife of 55 years, Sally; his son, Matthew Hopkins; grandchild, Nora Hopkins, and his sister, Sandra Hale.

In addition to his parents, he was also predeceased by his daughter, Kelley Hopkins.

In lieu of flowers contributions in his memory may be made to the West Copake Reformed Church or to the Community Rescue Squad.

LAKEVILLE, CT—Mary Stuart Robertson, 85, of Moore Road died May 13, 2022 in her beloved home. She was the loving wife of Douglas Robertson to whom she was married for 37 years.

She was born May 10, 1937 in Pittsfield, MA. She was the daughter of the late Mervin and Victorine Hall Whitbeck of Mount Washington, MA. She attended a one-room schoolhouse in Mount Washington until its closing and later graduated from Roe Jan High School in Copake. She was also a graduate of Vermont Junior College.

Following college, she resided in Lakeville with her first husband where she raised her children, and where she went on to spend the rest of her life. She was well-known within the community, spending many years as an excellent caregiver through the Salisbury Visiting Nurse Association and later, with private clients. Upon retiring, she continued her kind and caring service as a volunteer at Noble Horizons and with Hospice.

Vibrant, warm, fun and very social, she enjoyed a large circle of people in her life, from family to close friends to many acquaintances. Specifically, she considered Marion Romeo, also of Lakeville, and her sister, Betsy Garrett of Mount Washington, MA, to be two of her dearest friends.

Her many interests included cooking, decorating, knitting, rug hooking, and all things related to nature including tending to her plants and flowers. She was a perfectionist in all that she did.

In addition to her husband, Douglas Roberton, she is survived by: her three children, James B. Moore III of Vinalhaven, ME, Ashley DeMazza of South Royalton, VT, and Mary Bryan Moore and her husband, Stephen Brooks of New York City and Stanfordville; her granddaughters, Kate and Emily DeMazza, both of the Boston, MA, area; her sister, Betsy Garrett and husband, Harry Garrett of Mount Washington, MA, and their three children, as well as her sister-in-law, Margaret “Peggy” Whitbeck and three children; her stepsons, David Robertson and his wife, Tracy and two daughters of Yulee, FL, and Douglas Robertson, Jr., and his wife, Jamie and their son and daughter of Omaha, NE. She was predeceased by her parents, Mervin and Vicki Whitbeck and by her brother, Jim Whitbeck, all of Mount Washington.

Mrs. Robertson will be greatly missed by all who knew and loved her.

A small, private gathering to celebrate her life will be held in the coming weeks. Donations in her name may be made to the Salisbury Visiting Nurse Association or Hospice. His careers included working for Metro North Railroad, a mechanic at Greer’s Garage in Amenia and at the Wassaic Developmental Center. He was proprietor of Lenny’s Garage in Stanfordville and The Country Cone in Cherry Valley. “Lenny” loved auctions and buying and selling treasures.

He is survived by: his daughter, Lisa Slocum; sisters, Murial and Ida McEathron, Lorraine Phillips and Diane Hall; brothers, Irving and Daniel Ferris; numerous nieces and nephews. In addition to his parents, he was predeceased by: his siblings, Mildred Birdsall, Cathertine Wendover, James Ferris, Jr., and Stanley Ferris and his special friend, Albert Campbell.

A funeral service took place at the Bates & Anderson Redmond & Keeler Funeral Home June 16. Interment was in Cedar Park Cemetery. Memorial contributions in his name may be made to the American Cancer Society. ALBANY—Bonnie Lou Johnson, 68, of Catskill, formerly of Hudson, died Tuesday, February 22, 2022 at Albany Medical Center. Born in Hudson May 23, 1953, she was the daughter of the late Robert and Christine (Mossman) Klein Crego.

She was most recently employed with the Mac-Haydn Theatre in Chatham.

She will be greatly missed by: her son, James Johnson of Albany; brothers, Robert Klein (Elizabeth Daley), Todd (Kristen) Crego; one sister, Amy (Ronald) Beatty; step-brothers, Gary and Randy Crego; granddaughter, Larencia; several nieces and nephews. In addition to her parents, she was predeceased by her daughter, Kelly Klein, and step-brother, David Crego.

A memorial service was held June 20, 2022 at the Sacco Funeral Home. Burial was in Mellenville Union Cemetery.

She is survived by: her son, Mark Marks; daughter, Debra Marks and her grandchildren, Jason and Jennifer Marks. There will be no services at this time. Arrangements are with the Thomas P. Mooney Funeral Home, 11 Elm Street, Nassau. She was born September 20, 1955 in Baltimore, MD, the first child of Helen and Emanuel Knable. She was the sister of Stacie Knable-Crook (Rob) of Orange County, CA and Chet Knable (Allyson) of Marlton, NJ, and the wife of Donald Padrick for 40 years.

She attended Baltimore’s public schools before starting college at Moody Bible Institute in Chicago. She then transferred to Gordon College in Massachusetts, earning a bachelor’s degree in theology.

A beloved teaching assistant to children in the New Lebanon Central School District for nearly 25 years, she guided students not only in their academic studies, but also in life skills—like relating well and facing challenges—that would serve them and others as they matured. Her kindness and sense of humor imparted a motherly influence on her elementary school students. She taught them about cultures of the world in the school’s “Culture Club” and tried to emphasize the importance of physical well-being with the “Walk for Health.”

Mrs. Padrick was a gentle yet brave soul committed to her Jewish-Christian faith, with a deep, abiding desire to reach others. As a teen, she tutored underprivileged youths, and volunteered to help psychiatric patients housed at Baltimore’s now infamous Rosewood Center, which the State of Maryland would later shut down after years of reported incidents of abuse and neglect. Most Baltimoreans would barely approach the eerie property, much less enter it. She was also devastatingly intelligent with an often steely resolve, at times demanding (of herself, more than anyone). Her family and best friends knew that debating with her was probably not the best way to enjoy their time together—especially if they cared anything at all about winning.

From an early age, she had a love and talent for the arts: ballet classes to oil painting, “living” in libraries and bookstores, visiting museums with her beloved Aunt Jenny, and listening to her favorite folk music. As a mom, her passions broadened to include gardening (featuring Roses of Sharon and blue hydrangeas), cooking up a creative storm in her kitchen, and even the centuries-old craft of weaving. Never one to pursue an interest half-heartedly, she mastered the enormous wood loom that took up much of the Padrick family’s den. And for many summers at the Berkshires’ historic Hancock Shaker Village, she shared her gift with tourists who came to watch. Eventually, she took her weaving one ambitious step further, creating a children’s book—Follow the Threads—that cleverly wove her craft with the scriptures, specifically teaching kids how to follow the strands of Old Testament prophecy to find Messiah.

Besides her children, she was a mother to two sheep (Benjamin and Samuel), until they decided she was the best family member to head-butt. But they were loved, and regularly shorn for their wool, for weaving purposes, of course. She especially loved being at the ocean and—her favorite—Maryland crabs.

A funeral service was held June 21 at the Church of Our Saviour, 14660 Route 22, New Lebanon. A private burial followed. Arrangements were with the Thomas P. Mooney Funeral Home at 11 Elm Street, Nassau. GHENT—Gabrielle Marie Sagaert Snyder of Camphill Ghent and Valatie passed away peacefully June 17, 2022. She grew up in Ghent, Belgium, moved with her family to France and in 1948, relocated to Kinderhook. She was the daughter of the late Maurice and Maria (Lodens) Van Themsche and the loving wife of Edson R. Snyder.

She worked as a laboratory assistant for Sterling Winthrop in Rensselaer. Upon retiring, she enjoyed knitting for her family, tole painting, tending her beautiful garden, and caring for her treasured dogs. In addition to giving time to her many friends and neighbors, she served as a member of the VFW Auxiliary and the Kinderhook Historical Society. Traveling had an important significance to her, especially when her destination was France and visits with her extended family.

Her final years were spent as a resident at Camphill Ghent, where she enjoyed many new friends and the loving care of the staff. The family will be forever grateful for the compassionate staff and community at Camphill Ghent.

There will be no calling hours and funeral arrangements are still pending. Memorial donations may be made to Camphill Ghent, Inc., 2542 St. Jude Place, Memphis, TN 38105. Arrangements are with the Raymond E. Bond Funeral Home, 1015 Kinderhook Street, Valatie. To send condolences visit raymondbondfh.com.