CHATHAM—An Albany man was charged in connection with a 2021 bomb threat in Chatham. State Police from the Livingston barracks in conjunction with the State Police Forensic Investigation Center arrested Siddharth Dubey, 32, of Albany for making a terroristic threat and first degree false reporting, both class D felonies, June 22.

August 9, 2021, Columbia County 911 dispatched troopers to the Chatham Public Library at 11 Woodbridge Avenue in the village for a bomb threat received there.

Troopers and the Chatham Police Department safely evacuated the library, the nearby Chatham Middle School and school bus garage.

After an intensive 10 month investigation members of the Livingston Bureau of Criminal Investigation and the NYSP Forensic Investigation Center determined Mr. Dubey was allegedly responsible for the terroristic bomb threat.

He was arraigned in Claverack Court before Justice Michael Brandon and released on his own recognizance to reappear in Ghent Court July 11.

During a patrol to handle a diesel fuel spill in the Catskill Creek, June 20 at 7:25 p.m., Environmental Conservation Officers (ECO) on Hudson River boat patrol in Columbia and Greene counties, Lieutenant Anthony Glorioso and ECOs Jason Smith and Lucas Palmateer, observed a small boat operated by two subjects in a popular fishing location, while two other individuals fished from the shore. The officers noticed the pair on the boat tending a gill net, which is a violation. Lt. Glorioso operated the boat while ECOs Smith and Palmateer went ashore. The officers located multiple buckets and stringers holding several different species of fish including carp, catfish, pumpkinseed, Atlantic menhaden, herring, gizzard shad, and smallmouth bass. The officers issued seven tickets to the subjects for the illegal use of a gill net, fishing without freshwater fishing licenses, fishing without marine registries, possession of undersized smallmouth bass, and insufficient Personal Floating Devices aboard the vessel. Video of the officers pulling the net from the Hudson River may be found at: www.dec.ny.gov/fs/programs/press/EnConPolice.

Collision at the intersection. Columbia County 911 dispatched Canaan and Red Rock firefighters and Chatham Rescue June 25 at 5:01 p.m. for a two car accident at the intersection of State Route 295 and County Route 5 in Canaan. Red Rock firefighters were not needed at the scene and returned to quarters. Chatham Rescue reported two people refused medical treatment and they took three people to Columbia Memorial Hospital. State Police investigated. Firefighters were back in service at 6:13 p.m. Photo by RE Lindmark 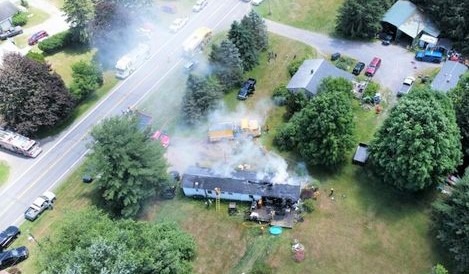 Bird’s eye view of fire through roof. Hillsdale firefighters and the Community Rescue Squad were called to 9151 Route 22, Hillsdale for a structure fire in a mobile home, June 19 at 12:43 p.m. Copake, Craryville, Ancram firefighters and the Claverack Firefighter Assist Search Team (FAST) were subsequently requested to the scene for mutual aid. Everyone got out of the home safely. No injuries were reported. Egremont responded to Hillsdale firehouse for a fill site and Millerton firefighters stood by at the Copake firehouse. Columbia County Fire Coordinators, State Police and the Columbia County Sheriff’s Office assisted on scene. NYSEG was called in to cut the power. Claverack firefighters spotted and handled a small dumpster fire at O’s Diner when they were leaving the structure fire scene. Firefighters were back in service at 4:01 p.m. The cause of the blaze was careless smoking according to a published report. Drone photo by DJ Stalker/Hillsdale Fire Company Facebook page

GHENT—As New Yorkers gather with their friends and families in the summer weather, many will host barbecues and parties for this upcoming Fourth of July. These holiday celebrations can pose serious safety hazards due to a large increase in firework use. The Firefighters Association of the State of New York (FASNY) offers some key safety tips for your friends and family to follow this upcoming Fourth of July.

“The warmer weather will certainly encourage New Yorkers to engage in various Independence Day activities to kick off summer. Home fire safety doesn’t stop at the door—there are still many fire risks outside the home to keep in mind. We want all residents and their families to stay safe as they celebrate this upcoming Fourth of July,” FASNY President John P. Farrell said in a press release.

Fourth of July celebrations can cause a great number of emergencies. Most fireworks-related injuries (about 66%) occurred in the month surrounding the July 4th holiday (from June 21, 2020 to July 21, 2020). According to the National Fire Protection Association (NFPA), brush, grass or forest fires accounted for three of every five reported fires started by fireworks in 2014–2018. In all, nine of every 10 of the fireworks fires in 2014–2018 were outdoor fires. The average amount of fires caused by fireworks amounts to $43 million worth of property damage annually.

Additionally, the U.S. Consumer Product Safety Commission (CPSC) 2020 reported that fireworks caused an estimated 10,000 injuries and 19,500 fires annually. Between June and July 2019, 7,300 firework-related injuries were treated in hospital emergency rooms with sparklers accounting for almost one-quarter of emergency room fireworks injuries. It is important to remember that in many cases, the individual injured was not always the individual using the fireworks.

Keep everyone safe by following the important tips below:

*Use glow sticks instead of sparklers

*Do not possess or shoot off fireworks on your own. Besides risking injury to yourself and the crowd watching the demonstration, you will be breaking the law

*Fireworks, with the exception of handheld and ground-based sparklers, are illegal in the State of New York

*Do not pick up or attempt to re-light used or “dud” fireworks—they may still cause serious burns or injury.