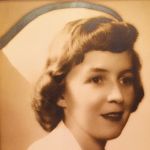 MOOERS—Dorothy Loraine Schroeder, age 92, of Mooers, passed away July 22, 2022 in the care of her loving family. She was born in the Bronx to Edwin Gustav Holz and Helen Carley. Her mother died soon after her birth, and she was raised by her father, her grandparents and Aunt Gertrude.

She graduated from Yorktown High School in 1947 and married John Henry Schroeder, September 30, 1950. They were married for more than 60 years. She survived her late husband, who passed away in 2008.

Mrs. Schroeder and her family were members of St. Andrew’s Lutheran Church. She was a registered nurse. She was educated at Vassar Hospital in Poughkeepsie. She earned a Bachelor of Science degree at Teachers College—Columbia University, and finished her education with a masters in nursing education from Pace University. She worked in the emergency room and obstetrics at Northern Westchester Hospital and as a public health nurse for Westchester County, a position she found most rewarding. She finished her career as a professor, teaching nursing at Westchester Community College.

She retired to Mooers with her husband in 1989, where they led a life of genteel farming and volunteer work. She lived her life for her family, her grandchildren, and therapy dogs. She was active in breeding and training many Labrador Retrievers for agility, tracking, obedience and therapy. She volunteered much of her time to the Clinton County Canine Club. She was president of the club for many years. She visited area nursing homes where her dogs met residents for pet therapy. Many of the dogs she bred went on to be valued companions for the disabled community. She took great pride in staying healthy and was in the founding cohort for the Harvard Nurses’ Health Study, now the basis for the medical understanding of lifestyle factors and their impacts on more than 30 diseases.

She is survived by: her sisters, Jane Sedrick (Vic) and Nancy Anderson (William, deceased); her 11 grandchildren, John Dietrich (Megan), Johanna (Craig), Allan (Rebecca), Forrest, Christopher, Emmeline, Hilary, Dustin (Erin), Heidi, Peper, Gunnar and three great-grandchildren, Siena, Chase and Lukas. Mrs. Schroeder was a loving wife, mother, grandmother and a strong advocate for animals. A private memorial service will be held at a later date. In lieu of flowers, the family requests donations be made to Guiding Eyes for the Blind of Yorktown Heights, the Clinton County Canine Club or the Community Hospice Foundation of Albany. Condolences may be conveyed at frenchblasl.com.

ALBANY—Patrice C. Welch, 32, of Hudson went home to the Lord, Saturday July 23, 2022 at Albany Medical Center. Born in Hudson, January 12, 1990, she was the daughter of the late Jeremiah Moore and Tammy Bell of Watervliet.

PHILMONT—Mary Ann Curry, beloved by all who knew her, passed away peacefully at the Pine Haven Nursing and Rehabilitation Center, July 24.

Born May 19, 1929 to John and Katherine Scanlon Ryder in Woodridge, Queens, she graduated from high school and worked for many years in the commercial grocery field.

Married in 1951 to John Fitzgerald, who died in 1978, she later married and began a new life with Hugh Hagan Curry. The Curry’s moved from Queens to Copake Falls in 1991 and spent many happy years in the Roe Jan area.

A devoted Catholic, Mrs. Curry was a dedicated parishioner of St. Bridget’s/Our Lady of Hope in Copake Falls and prayed daily for individuals who were in need of help.

She was predeceased by her second husband, Hugh in 2016 and is survived by two beloved nieces, Catherine O’Brien and Patricia McLaughlin, and their children.

Born in White Plains, February 2, 1945, she was the daughter of the late Cecil R. and Marjorie F. (Hoysradt) Decker.

She was a self-employed housekeeper. She is survived by: daughters, Kellie Hamm, Tammie Lilley and Jodie Churchill and her son, Joseph Mair. There are no services pending. To leave online condolences visit www.saccofuneralhome.com.

He graduated from Hudson High School in 1948 and continued his studies at SUNY Albany, where he earned a BA in 1952 and a BMA in 1958. He served in the U.S. Army from 1953 to 1957 as a specialist second class, Army Security Agency. He was employed as a French and Spanish teacher in the Ichabod Crane Central School District from September 1958 to June 1961 and in the Chatham Central School District from September 1961 to June 1969, with a two-year interval from 1963 to 1965 when he resided in California. From 1969 to 1981, he taught Spanish at the Taconic Hills Central School District. After retirement in 1981, Mr. Knitt worked for 13 years as a part-time postal assistant at the Stuyvesant Falls Post Office.

In addition to his parents, he was predeceased by his brother, Charles W. Knitt, Jr. He is survived by: several cousins, including David, Richard, Jeanne and Lisa Nabozny, Ida Mae (McGuire) Nilan and Robert H. Hoffman “Shorty” and their families.

Funeral services will be held Friday, July 29, 2022, noon at the Raymond E. Bond Funeral Home, Valatie with a calling hour from 11 a.m. to noon. Burial will follow in the West Ghent Cemetery.