LIVINGSTON—State Police from the Livingston found a stolen car, which led them to a stolen gun.

At 12:50 p.m., a State Police investigator noticed a 2005 Hyundai Santa Fe known to be stolen was being operated on State Route 9 near Stickles Road. Coordinating with uniform patrols in the area, a traffic stop was conducted. An investigation confirmed the vehicle was the same one reported stolen from Livingston, July 8.

Additional investigation found the three suspects to be in possession of small amounts of both crack cocaine and heroin, as well as a stolen Ruger 17 HMR rifle.

The suspects were each issued appearance tickets returnable in Livingston court July 21.

HUDSON—Defendant Jeffrey Yeh was convicted in Columbia County Court by plea of first degree endangering the welfare of an incompetent or physically disabled person, a class E felony, before Judge Richard Koweek, July 14, according to a press release from District Attorney Paul Czajka.

Judge Koweek will sentence defendant October 4. The DA will not make a sentence recommendation, as is a standard practice. Judge Koweek informed the parties that he will impose a sentence of probation.

“All elder abuse cases are extremely important and this one is no more or less important than any other,” DA Czajka said in a press release. “By resolving this case by guilty plea, however, the Court has made it unnecessary for the victim to be subject to the rigors of a trial, although,” as the DA

stressed, “the victim has been extremely courageous and strong throughout this lengthy prosecution,” which started well before the Covid pandemic delayed all trials.

HUDSON—Michael Lawrence, 74, of Austerlitz was acquitted in Columbia County Court on more than 350 counts of child sex abuse crimes, July 14.

A 12-person jury reached their not guilty verdict after deliberating for about three hours.

The defendant was charged September 30, 2019, and it was alleged that, beginning in 2009, he had sexual contact with three children, which continued through 2013.

Columbia County District Attorney Paul Czajka said in a press release that while he usually never comments or criticizes jury decisions, he had to admit his disappointment.

Judge Jonathan Nichols presided over the trial. The defendant was represented by Carol Morgan, Esq. 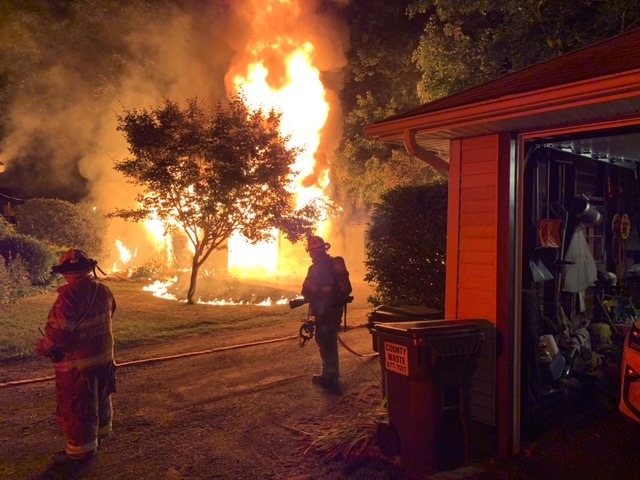 Garage consumed by blaze. Fire destroyed a wooden two-car garage at 155 State Route 23 in Claverack, July 16 at 10:03 p.m. County 911 dispatched Claverack firefighters along with the Greenport Rescue Squad. Mutual aid was summoned from Mellenville, Churchtown, Philmont, Greenport, Livingston and West Ghent. National Grid was called to the scene to cut the power. The fire, caused by the spontaneous combustion of chemical-soaked rags, melted the siding of a neighboring garage. Firefighters were back in service at 11:48 p.m. Photo by David McGrath

“The sunny, summer weather is giving people ample opportunity to enjoy New York’s outdoors, but it’s also increasing the risk for fires,” Commissioner Seggos said in a press release. “When building a campfire, please make sure to always keep an eye on it and pay attention to the wind. And when finished, make sure the fire is fully out and cold to the touch.”

The majority of the state remains at a moderate risk for fires, meaning that any outdoor fire can spread quickly, especially if the wind picks up. Campfires are among the top five causes of wildfires.

DEC continues to encourage New Yorkers and visitors to follow the recommendations below to reduce the risk of wildfires.

While camping in the backcountry, New Yorkers are advised to:

*Use existing campfire rings where possible

*Clear the area around the ring of leaves, twigs, and other flammable materials

*Never leave a campfire unattended. Even a small breeze could cause the fire to spread quickly

*Drown the fire with water. Make sure all embers, coals, and sticks are wet. Move rocks as there may be burning embers underneath.

*Never burn on a windy day

*Check and obey all local laws and ordinances

*Always have a garden hose, shovel, water bucket, or other means to extinguish the fire close at hand

*When done, drown the fire with water, making sure all materials, embers, and coals are wet.

For information on open burning and campfire safety in New York, go to DEC’s Open Burning in New York and Fire Safety When Camping webpages (www.dec.ny.gov).

For further questions about wildfires, call 1-833-NYS-RANGERS and call 911 to report a wildfire.