AT THIS STAGE of my life, it is difficult to go out around my home and find a life form I have not seen before. It is good to mow fields as late as possible in the season in order to let the birds finish their nesting cycles and have the fledged birds able to fly to safety, so a few years ago at the end of August, I finally had my hay field cut. That evening I took a tour across the field to see what had been uncovered. In past years there have been some late turkey nests and there are often snakes that have been killed. Crows always follow the mower and look for these things as a food source, and I started looking where they were foraging. Nothing much was found until something leaped across the path ahead of me. It appeared to be a frog from the long, approximately 3 ft. jump, but it was strange looking. As I approached its landing area it leaped again. This continued until I finally got a better look at it and discovered that it was a mouse I had never seen before. It is essential to get as good a view as possible so all the field marks can be noted for later identification. 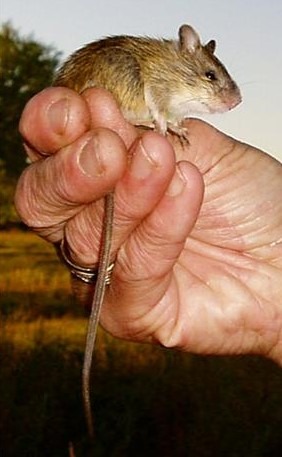 It was very round, possibly a pregnant mouse that had been eating well so it soon tired and sat on top of some flattened hay where I could note its characteristics. It was very pretty and about the size of a large deer mouse with prominent ears and a white belly. The tail was narrow and much longer than the length of the body, brown above and white underneath. The most striking feature was the body color, which was dark “burnt umber” brown on top of the head and down the back, orange-brown sides, and white belly. The eyes were black beads and larger than some mice, probably because it is mainly a nocturnal animal. It was a very pretty and unusual mouse. After a good look, I let it go on its way as it headed for the bushes at the edge of the field.

At home, the Peterson Field Guide to Mammals of North America revealed the critter’s identity, Meadow Jumping Mouse, or Zapus hudsonius. The body length is 3.5” and the tail about 5.5”. There is a very similar Woodland Jumping Mouse, but that one has a white tip on the tail which this mouse didn’t have. They eat seeds, berries, insects (in particular moth larvae), and fungi. They like damp meadows near wet areas which was the exact habitat where it was found, and they are good swimmers. It gains half again as much body weight which carries it through its underground winter hibernation. Its gestation period of 18 days, can produce between 2-9 offspring, and can rapidly increase the population of an area.

Peterson’s Guide gave an amusing description of what happens when a field containing these mice is mowed. They keep hopping out of the way of the mower until they are all taking cover in the last little strip of remaining grass. As this is mowed they jump out en mass like popcorn popping and scatter over the field. I didn’t get to witness this, but it must be a sight to see. When I mowed fields in my youth I saw this happen but didn’t stop to identify the mice.

During winter the jumping mice hibernate for 6-10 months in a grass and leaf-lined nest about 2 ft. underground. I almost assumed this unusual mouse to be a frog, which goes to show how important careful observation can be. It is good to stop and spend a few extra minutes to check out any creature movements, however commonplace. The reward was great and another species was added to the list for this property. I couldn’t wait to share this find with the younger members of the family who are always eager to learn more about the outdoor world around them.