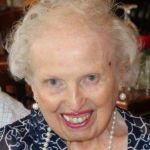 She was born June 24, 1919 in Ancramdale, the daughter of William, Sr., and Eulena (Niver) Baulkwill and sister to William, Jr.

She graduated from Pine Plains High School in 1938. She then went on to attend Secretarial Junior College in Milford, CT, where she graduated in 1940. At that time her family moved to White Plains, where she resided until her marriage to Lester Joseph Musgrove, June 7, 1952.

Mrs. Musgrove worked at Penn Mutual Insurance Company in NYC, before moving to a long career in the banking industry. She survived multiple bank mergers over the years and ultimately retired from Wells Fargo Bank.

She is survived by: two nephews, Bill and Charlie Baulkwill; niece, Valerie Desimone; six great-nephews and -nieces; three great-great nieces and -nephew. She was predeceased by her husband in 2010.

She enjoyed square dancing on nights and weekends for many years. She and Lester were part of a square dance exhibition at the 1964 World’s Fair in New York. She loved lighthouses of all shapes and sizes. Her desserts at family functions were legendary. She and Lester vacationed regularly in Florida and at Lake Winnipesaukee, New Hampshire. She was a breast cancer survivor and a wonderful aunt and friend to all who knew her, always with a ready smile and a positive attitude. Her family will remember her giggles and sense of humor the most.

Donations in her memory may be made to a charity of one’s choice. To leave a message of condolence for the family visit www.peckandpeck.net

He was born December 23, 1943 in Syracuse to the late Tracy E. and Anna Alexander.

He was predeceased by: Beverly, his wife of 56 years just 8 days prior to his death; his sister, Doris Visker; brothers, Tracy “Skip”, Matthew and Robert. He is survived by: sister, Pat Hilpertshauser of Florida; children, William, Jr., (Shelly) of Queensbury, Dennis (Lorinda) of Valatie, Tracy (Billie Jo) of Greenport and Cindy (Lorenzo) of Greenport; eight grandchildren and two great-grandchildren.

He was an avid New York Yankees fan.

Funeral services were held August 26 from the Bates & Anderson-Redmond & Keeler Funeral Home. In lieu of flowers, donations may be made to Columbia County Veterans Service Agency, 389 Fairview Avenue, Suite 7, Hudson 12534.

Born October 16, 1926 in Clermont, she was the daughter of the late Albert and Mary (Broast) Dembosky. She was employed at Taconic Farms for more than 30 years until her retirement.

She enjoyed her home overlooking the Hudson River and especially the beautiful sunsets. She also enjoyed watching soap operas.

She was a loving mother and friend and she will be greatly missed.

A Mass of Christian Burial will be celebrated August 30, 10 a.m. from Holy Trinity/St. Mary’s Parish in Hudson. Visitation at the Bates & Anderson-Redmond & Keeler Funeral Home will be held Monday, August 29 from 4 to 6 p.m. Interment will be in Viewmont Rural Cemetery.

Contributions in her memory may be made to Community Hospice of Columbia/Greene, 47 Liberty Street, Catskill 12414.

Born October 2, 1939, in Hudson, she was the daughter of the late Walter E. and Dorothy (Patton) Velie.

Mrs. Fenoff was born and raised in Hudson and grew up in the Robert Taylor House, the oldest house in Hudson. She was proud to have served as City of Hudson historian for the past 35 years. During that time, she obtained a number of grants for archival materials to preserve and organize the city’s historical documents. She also helped many people from all corners of the state, the country and abroad trace their genealogical roots to Hudson, and shared information on sites and homes of interest.

Mrs. Fenoff was a member of the original Historic Preservation Commission and with friend and fellow member, the late Mary Hallenbeck, updated an inventory of buildings and homes that resulted in designation of the city’s largest historic district that covers most of the city’s south side.

The developers of Crosswinds contacted her for help naming the streets there, she responded easily—the housing development was across the street from the Firemen’s Home, so it was fitting to name them after Hudson’s fire companies.

Mrs. Fenoff also helped city officials and others with research on various projects, including restoration of the Amtrak station and Warren Street sidewalks. She spent several years documenting the burials in Hudson City Cemetery and helped with the research for the redesign of the City Seal. She documented many other cemeteries in Columbia County, stone by stone, and transcribed the records for several of the churches in Hudson and beyond, and took it upon herself to record the births, deaths and marriages from Hudson’s past newspapers.

She was a lifetime member and archivist of Christ Church Episcopal in Hudson and a former longtime member of the Hendrick Hudson Chapter, Daughters of the American Revolution, where she served as curator of its collection of artifacts and ephemera. She worked on a DAR exhibition that commemorated the sesquicentennial of the Civil War in 2011, the showcase of which was the chapter’s restored flag of the 128th New York Infantry Regiment, a volunteer regiment from Columbia and Dutchess counties. She worked with state representatives from Peebles Island to get the tattered flag restored. 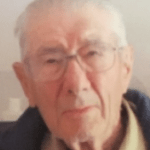 Born November 18, 1921 in Patterson, NJ, he was the son of the late Stephen E. and Anna (Urban) Bogdanffy. He married Elizabeth “Betsy” Lasher, October 25, 1947 at St. Paul’s Episcopal in Tivoli. Together they owned and operated Feather Ridge Farm in Elizaville. From a young age, Mr. Bogdanffy found his passion for farming. He had a love for all animals and had a youthful business mind to create a business that could flourish and is still successful to this day.

When not on his farm, he could be found out hunting or fishing. He enjoyed trips with his wife and son throughout the years to explore new places and see the wildlife these places had to offer. He was a founding member of the former Elizaville Game Club. Mr. Bogdanffy was a big advocate for the community and could often be found supporting it in one way or another. Although never active, he was a founding member of Elizaville Fire Company.

He is survived by: his son, Stephen Bogdanffy; his grandchildren, Hallie, Katie and Justin; and his six great-grandchildren; extended family, friends and colleagues.

Memorial donations may be made in his memory to the Elizaville Fire Company, 1575 County Route 19, Elizaville 12523.

Born in Rhinebeck, July 26, 1938, she was the daughter of the late Albert and Ella Mary Warner (Cook). After high school, she earned her associate’s degree and began her nursing career in Albany. She also worked at Columbia Memorial Hospital in Hudson, and other hospitals in New York. Following her nursing career, she moved on to work at Price Chopper, from where she retired.

She enjoyed: traveling—cruises, road trips to Florida, Texas or Mexico; the casino; family get-togethers and bowling in her league. She was always helping others, something she loved to do—not just family, but friends and loved ones equally.

She is survived by: her four sons, John Metz, Billy Metz and his girlfriend Patty Osborne, Ed Metz, Jay (Jessica) Metz; two daughters, Georgeann Drivas and Robin Metz; her 16 grandchildren and 20 great-grandchildren. She was just a few weeks away from being a great-great-grandmother. A Memorial Service will be held Saturday, September 3, 2022 from 11 a.m. to 1 p.m. at the Sacco Funeral Home, 700 Town Hall Drive, Greenport.