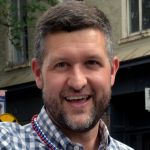 In his victory statement, released on Twitter, Mr. Ryan wrote, “Choice was on the ballot. Freedom was on the ballot, and tonight choice and freedom won. We voted like our democracy was on the line because it is. We upended everything we thought we knew about politics and did it together.”

The Hudson Valley District was considered a “bell weather” election by national pundits with Mr. Ryan emphasizing a woman’s right to choose and Republican extremism, while Mr. Molinaro emphasized inflation and crime.