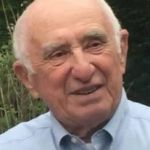 He graduated from Fort Hamilton High School in 1949 and joined the Naval Reserves in 1951. He worked for RCA Corporation in Moorestown, NJ, for many years eventually retiring in 1991 after the company was acquired by General Electric.

Mr. Bergen is survived by: his daughter and son-in-law, Kimberly and John Sullivan of Holliston, MA; two granddaughters, Nora and Margaret of Holliston, MA; and his sister, Grace Ann Normandin of Manchester Village, VT. His wife of more than 50 years, Carole, predeceased him in November 2018.

He first came to Hillsdale in 1935 when his aunts, May Meehan, Nora Ahearn and Margaret Ahearn purchased a farm. As a city kid from Brooklyn, he loved every minute of every visit to the family farm and in 1991, he realized a long-held dream of living full-time at this farm.

He was an avid sailor as a member of the Cooper River Yacht Club in Collingswood, NJ, and also enjoyed skiing well into his 80s at Catamount Ski Resort.

A private service will be held graveside October 14. The family is welcoming friends and neighbors to the house on Saturday, October 15 at 1 p.m. For online condolences visit wenkfuneralhome.com

HUDSON—Betty Ann Slater, 70, of Germantown passed away on October 11, 2022 at Columbia Memorial Hospital.

She was born January 19, 1952 in Sharon, CT, to the late Homer and Helen (Pelkey) Miller. She was an avid bowler, and had a love for butterflies. She also enjoyed puzzles and spending time with her family.

She was also predeceased by her daughter, Jennifer Miller, and two sisters, Stella Slater and Annie Miller.

A time for sharing of memories and offering condolences to the family will be Friday, October 14, 2022 from 4 to 6 p.m. at Peck and Peck Funeral Homes, 7749 South Main Street, Pine Plains. A funeral service will be conducted Saturday, October 15 at 10 a.m. Interment will follow in St. Paul’s Cemetery, Red Hook.