Born April 22, 1936, she was the daughter of the late Isosceles Santos Pascual and Leonara Robles (Figueroa).

She is survived by: five children, Michael, Carlos, JP, Jay and Sancho; a brother, Abraham; two sisters, Nora and Maumi and two grandchildren, Amanda and Grant. 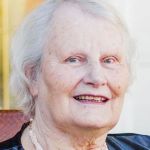 She was born to Thomas Dodson and Helen “Nellie” Robinson Dodson, May 14, 1936 in Chatham, England. She met Benjamin Tullar in Oxford, England February 1954. They married April 30, 1955 which was the start of an idyllic, serene, peaceful “(all right, tumultuous)” and beautiful 67 years.

She is survived by: her six children, Gilly, Kenneth (Kristen), June (George) Matthew, Bruce (Merrie) and Paula. She was preceded in death by her son, Daniel Scott Tullar. She is also survived by seven grandchildren, Katura, Robert, Iris, Joshua, Ethan, Caitlin and Danyelle and five great-grandchildren, Connell, Sophia, Elias, Daniel and Bran as well as many extended family members.

She had a huge heart. She loved her family which extended beyond her immediate world. She took all of her children’s friends in and extended her love to the community and treated everyone as if they were her own family. She successfully ran The Cottage Restaurant in East Chatham for 28 years. Many of her children worked alongside her but her primary partners were her devoted daughter, Paula and her loving husband.

Calling hours will be held Monday, October 10, 4 to 6 p.m. from the Wenk Funeral Home, Chatham, a memorial service will follow at 6 p.m. In lieu of flowers, donations may be sent to the Cavell House (NYOH Community Cancer Foundation (www.newyorkoncology.com) or a charity of one’s choice in her name. For online condolences visit wenkfuneralhome.com