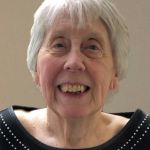 CATSKILL—Janice “Jan” Wilkinson Mans of Churchtown died October 19, 2022 at the Pines Nursing Home, Jefferson Heights, where she had been a resident for the past two years.

She was born September 16, 1932 in Hudson to Harold and Mina Wilkinson. She grew up in Copake and graduated from Roeliff Jansen High School in 1950. In 1952, she married her high school sweetheart, Maurice “Mo” Mans and soon after they established their lifelong residence in Churchtown, where they enjoyed their life together until Mr. Mans’ passing in 2015.

Mrs. Mans worked the front desk at Dr. Acciani and later Dr. Kempler’s dental practice on Green Street in Hudson for 30+ years. Always a hard worker, she balanced her home, work and volunteer life. She was a 50+ year member of the Churchtown Fire Department Ladies Auxiliary, a 60+ year member of St. Thomas Lutheran Church participating on the church council and church guild and the crafty stitchers sewing group which created pillows for heart patients, helped deliver meals for Columbia County Meals on Wheels, worked at the Claverack Library and was an active member of the Roe Jan Alumni Club, where she enjoyed helping to plan reunions. She also volunteered at The Second Show Community Thrift Shop. After her retirement, she and her husband joined the Claverack Senior Citizens group and made many lifelong friends. They traveled to Europe and Alaska and took many excursions all over the United States. Winters were spent in Myrtle Beach, SC, where they again made many friends. She was blessed to have lived a long, good life and she often said she had no regrets. She knew the value of a true friend and was surrounded with a lifetime of friendship.

The family thanks the staff at The Pines nursing home for the care given to Mrs. Mans over the past two years. Arrangements are with Sacco Funeral Home, 700 Town Hall Drive, Greenport. Funeral services will be held Wednesday, October 26, 2022, 11 a.m. at St. Thomas Lutheran Church, Churchtown, followed by internment in the Churchtown Cemetery. Friends and family are invited to visitation at the church beginning at 9:30 a.m. prior to the service. She was born in Albany, October 30, 1967, the daughter of the late Kenneth E. and Alberta R. (Teal) Sears. She was raised and educated in New Lebanon.

She was a homemaker for most of her life and loved being a mother to her two daughters, Nicole and Kari. Her children were her life and she loved to brag about them any chance she got.

She loved to cook and bake and decorate for the holidays. She enjoyed crafts and crocheting. She also was a personal caregiver to many elderly neighbors and friends. Above all, she had the most loving heart and will be missed by her family.

She was the beloved mother of Nicole A. Schmidt and Kari A. (William) Zuke, both of Stephentown; adored grandmother of Alana and Lukas Zuke; dear sister of Kenneth (Marcie) Sears, Jr., of New Lebanon, Wanda (Alan) Sears of Dalton, MA, and Paul (Terry) Sears of East Chatham; aunt of Kenneth and Kaitlyn Sears.

Relatives and friends are invited to call at the Hall & Higgins Funeral Home, 457 NY 43, Stephentown, Wednesday, October 26 from 4 to 6 p.m.

Arrangements are by the Hall & Higgins Funeral Home in Stephentown. Sign the condolence book at ParkerBrosMemorial.com.

VALATIE—Bonnie J. Van Steenburg, 72, of Valatie passed away Wednesday, October 19, 2022 at her home.

Born February 1, 1950 in Hudson, she was the daughter of the late Robert and Dorothy (Cramer) Shaw. She worked for Rielly Mills in Valatie for a time and after retiring from there was a self-employed housekeeper. She was an avid Elvis fan.

She was predeceased by her loving husband, Benjamin “Skate” Van Steenburg.

Funeral services were held October 24 at the Raymond E. Bond Funeral Home, Valatie, with the Reverend Nick Becker officiating. Visitation hours were prior to the service. VALATIE—John “Jack” Paladino, 85, of Valatie died October 21, 2022 surrounded by his family, after battling a long illness. Born May 9, 1937 in Astoria, he was the son of the late George and Annette (Weiss) Paladino.

He lived in Columbia County with his family. He was a communicant of St. John the Baptist Catholic Church and a member of the Knights of Columbus. He served in the U.S. Army from 1956 to 1958.

He was a butcher by trade and may best be remembered as the proprietor of Depot Square Butcher Shop in Chatham, which he owned and managed from 1975 to 1985. He subsequently went on to pursue other business ventures, always working hard to provide for his family.

Mr. Paladino was especially proud of his children and grandchildren and always championed them throughout life’s milestones and achievements.

He enjoyed movies, hunting, fishing, cooking, casinos, gardening and woodworking, but was most happy when hosting friends and family for barbecues and holiday parties.

Memorial donations may be made to St. John the Baptist Catholic Church or the Rensselaer County Branch of Community Hospice. Arrangements are under the direction of the Raymond E. Bond Funeral Home, Valatie. GHENT—His family is sad to announce the passing of Father Louis R. Gigante, son of the late Salvator and Yolanda Gigante. He passed October 18 peacefully in his sleep.

While at St. Athanasius, he began his life’s work, giving back to the people and helping them, “rise from the ashes.” In 1968 he founded the South East Bronx Community Organization. SEBCO is credited with starting the rebuilding of the South Bronx through the affordable housing programs, the first by the federal, state, and local governments. The organization is still in operation working tirelessly to bring affordable housing to the neighborhood.

He is survived by his son.

A Mass of Christian Burial will be celebrated Friday, October 28, 10:30 a.m. at St. James Church. Arrangements are under the direction of the French, Gifford, Preiter and Blasl Funeral Home. STOTTVILLE—Surrounded by her loving family, Joan Margaret (Leiser) Briscoe received her angel wings and went to join the Lord October 20. From Heaven she will continue to watch over and guide her family, the pride and joy of her life. She was born November 9, 1935 to the late George and Edith (Silcock) Leiser. She was also predeceased by her brother, George Leiser (Sandra) of Dothan, AL.

She lived her entire life in Stottville and relished the fact that she was known as a small town girl. She married the love of her life, James Briscoe and they recently celebrated 67 wonderful years of being together. Her favorite season was always autumn. She loved the trips that she and her husband took to the New England area during that time of year. Her greatest accomplishment and joy was her family: Michael and Barbara (Jostlin) Briscoe of Stottville, Mark and Janet (Fahs) Briscoe of Stuyvesant and Ellen (Briscoe) and Frank Melino of The Villages, FL. In addition, Mrs. Briscoe is survived by her precious grandchildren, Heather (Briscoe) and Bobby LaCasse, Carrie (Briscoe) and Will Richard, Shawn and Amanda (Sanders) Briscoe, Kelly (Briscoe) and Alex Rosenstrach, Kristin (Melino) and John Koloniaris, Ryan and Autumn Melino. She was delighted to welcome 12 beautiful great-grandchildren to the family. She ensured that they were all loved and an important part of the family. The many pictures displayed throughout her home were a tribute to those she absolutely adored. Also, she had many cousins who were always a part of her life.

In her early career, Mrs. Briscoe worked as a teller for National Commercial Bank in Hudson and later spent 25 years until her retirement at Carter Opticians. She was a member of the Holy Family Church of Stottville. She will be dearly missed and certainly remembered as a loving wife, mother, grandmother, great-grandmother and a loyal friend. She was a caring, generous, and loving person who left a mark on her family and those she encountered throughout her life. Her influence and impact will continue to live on through those whose lives she touched.

Calling hours were October 23 at the Bates & Anderson-Redmond & Keeler Funeral Home. A Mass was held October 24 at St. Joseph’s Church in Stottville. Burial followed at Cedar Park Cemetery Hudson. In lieu of flowers donations may be made to the Stottville Fire Company, P.O. Box 264, Stottville 12172. HUDSON—Donald “Mickey” Blanchard passed away October 12, 2022 at his home in Hudson. He was born April 28, 1943 in Brooklyn. He spent most of his life as a resident of Columbia County. After retirement, he moved to Arizona with his wife, Charlene (Doty) Blanchard, who preceded him in death. He then moved back to Columbia County, which he considered home.

RHINEBECK—Barbara A. McAvoy, 81, of Rhinebeck, formerly of Livingston, passed away Wednesday, October 19, 2022 at The Thompson House in Rhinebeck.

Born May 12, 1941 in Brooklyn, she was the daughter of the late Cornelius and Ellen (McDonald) Cullen. She married Joseph Walker McAvoy, Sr. He predeceased her July 22, 2011.

She did not have a lot growing up. Yet that did not stop her from having a big heart. She was always helping and sharing her love with others. From inviting a woman who worked at the dump to Thanksgiving dinner because she had no other place to go, to helping a neighbor rake leaves or shovel snow. She also babysat many children and became a positive influence in many of their lives. She was also a home health aide for a number of years to many residents in Rhinebeck. This was very fulfilling and she loved everyone she cared for.

Her greatest joy was spending time with her family. She loved sharing stories, laughing, dancing and just being with the ones she loved. Her grandchildren and great-grandchildren were her pride and joy and the time she got to spend with them was a true blessing to her.

She is survived by: her daughters, Melissa McAvoy of Hudson, Donna (Louis) Stiltner of Black River, Kim (Michael) LaForge of Copake, and Kelly McAvoy of Oswego; eight grandchildren; six great-grandchildren; along with extended family and friends.

Memorial services will be held Thursday, October 27, 2022, 11 a.m. at the Clinton Alliance Church, 1192 Centre Road, Rhinebeck. Those sending flowers should have them sent directly to the church. A reception will follow in the Youth Center, across the street from the church.

Memorial donations may be made in her memory to the American Diabetes Association, www.diabetes.org She was born in Schenectady, May 21, 1955, to the late Stanley and June MacDaniel. She graduated in 1974 from Columbia High School and went on to attend HVCC for nursing. She had many jobs around the Capital region, but her true passion and joy was making candy. She was the founder of Candyland Confectionery in East Greenbush. She was an expert candymaker and loved baking. She had an amazing sense of humor, was loving and kind. She and her family made many beautiful memories living in Hampton Manor. Fall was her favorite time of year, but Christmas was her favorite holiday.

She was the fifth of six children, and is survived by her siblings, Bruce, Stephen, Kathleen MacDaniel, Gail McWilliams, and the late David MacDaniel.