That day at 4:15 p.m., a 57-year-old Hudson resident called the Hudson Police to report that a man had stolen his money while he was at a convenience store at Second and Warren streets.

The suspect allegedly grabbed $160 in cash from the victim’s hand and refused to give it back. The suspect then allegedly left the store with the money.

HPD patrols and detectives reviewed the store video and recognized the suspect from previous contacts. A short time later Detective Sergeant Jason Finn spotted and confronted Mr. McNeil at the Hudson Amtrak station. Mr. McNeil allegedly resisted arrest and ran up Allen Street. Det. Sgt. Finn was able to apprehend the suspect after a brief struggle. No one, including the victim, was injured during the incident. It is believed that the suspect was planning to leave the area.

Mr. McNeil was arraigned by Judge John Connor in Hudson City Court. He was sent to the Columbia County Jail with no bail because he had two previous violent felony convictions for first degree robbery (2013) and second degree criminal possession of a weapon, a loaded firearm (2008).

Mr. McNeil was to return to court at a later date. He is currently on New York State Parole.

“I commend Det. Sgt. Finn, a 22-year veteran of HPD, for his alertness and dedication to duty. He was able to locate and safely apprehend a dangerous suspect. Quick action kept other Hudson citizens from being victimized,” Police Chief L. Edward Moore said in a press release. 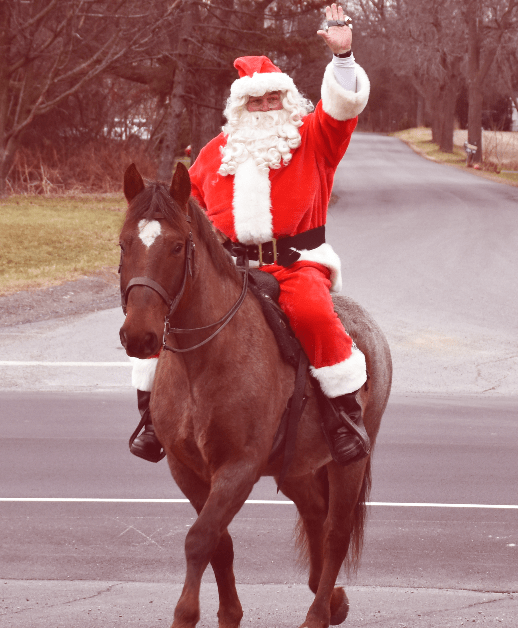 The reindeer are resting up. As part of the annual toy drive, New York State Police are accepting new unwrapped toy donations at the Livingston barracks, 3353 State Route 9, from now until December 4 to benefit local children. Once the toys are collected, Santa will pick them up for delivery. Call 518-851-2001 for additional information. Photo contributed

GHENT—The New York State Department of Motor Vehicles (DMV) and the Governor’s Traffic Safety Committee (GTSC) offer tips to help New Yorkers winterize their vehicles and to prepare to drive in more challenging weather conditions. The agencies also remind motorists that they can install snow tires on their vehicles. State law allows the use of snow tires from October 16 through April 30.

“Winter is right around the corner so now is a good time for motorists to winterize their vehicles and anticipate changing weather conditions,” Mark J.F. Schroeder, DMV commissioner and GTSC chair said in a press release. “Motorists can ensure their own safety and that of others by taking a few simple steps, especially driving slowly when conditions are adverse, making sure the vehicle and the headlights are clear and not covered with ice or snow, and having ample windshield washer fluid.”

Before driving, GTSC recommends these tips:

*Clear/clean all lights and windows

*Remove all snow and ice including on top of the vehicle

*Ensure the vehicle’s heater and defroster are working properly

*Make sure the recommended amount of antifreeze is in the radiator

*Get familiar with a new vehicle before driving in harsh weather conditions.

*Warm up the car so the defroster clears the windows

*Turn on headlights whenever windshield wipers are on. New York State law makes this mandatory

*Leave plenty of room between vehicles

*Don’t try to pass or weave in and out of traffic. All drivers must be prepared to react if other drivers start to slide

*Do not drive during ice or snowstorms unless it is necessary

*When sleet, freezing rain or snow begin to fall, remember that bridges, ramps and overpasses will freeze first. Be aware that slippery spots may remain after snow is removed.

*Abrasive material such as sand or kitty litter, in case the vehicle gets stuck in the snow

*Jumper cables, flashlight, and warning devices such as flares and emergency markers

*A cell phone with charger, water, food, and any necessary medicine (for longer trips or when driving in lightly populated areas)

Motorists are urged to check 511NY before traveling. The free travel information system is accessible 24 hours per day by calling 511 or visiting www.511NY.org. The service provides real-time traffic conditions and links to information about air, rail and transit services.

The 511NY website features a winter travel advisory system, with real-time travel reports and a color-coded map indicating which state roads are snow-covered, ice-covered, wet, dry, or closed to help drivers determine if travel is advisable. The system provides updated snow and ice conditions for interstates and other heavily traveled roads as reported by snowplow operators.