(This is the fifth in a series of articles about housing in Columbia County.)

PHILMONT—A Philmont project named The Woods, as well as the planning approval process and the now-pending lawsuit about it, embody many of the conflicting themes surrounding housing projects in the county.

The Woods project is for 16 market-rate (not “affordable”) homes on a 21-acre site with lots ranging in size from .5 to 3 acres. The site abuts an 11-acre conservation area that in turn borders Summit Lake, a key natural feature of the village. The heart of the village sits on the opposite side of Summit Lake, and residents living on Lake Side Drive, Ark and Band streets will look towards The Woods.

The project sponsor, Clover Reach Partners LLC, is owned by two local builders, Jock Winch, Jr. and Andrew Personette. Both are also part of Claverack Builders and both are multi-generation county residents.

The project was granted preliminary subdivision approval on August 3, 2022 by the village Planning Board. Its opponents, who filed suit challenging the approval in September, include the Summit Lake Conservation Group, LLC, an entity formed a month earlier for the purpose of resisting the project. Among its members are the co-founder and executive director of Philmont Beautification, Inc., a 20-year-old non-profit dedicated to the revitalization of the village, and five residents in whose viewshed The Woods will rise. 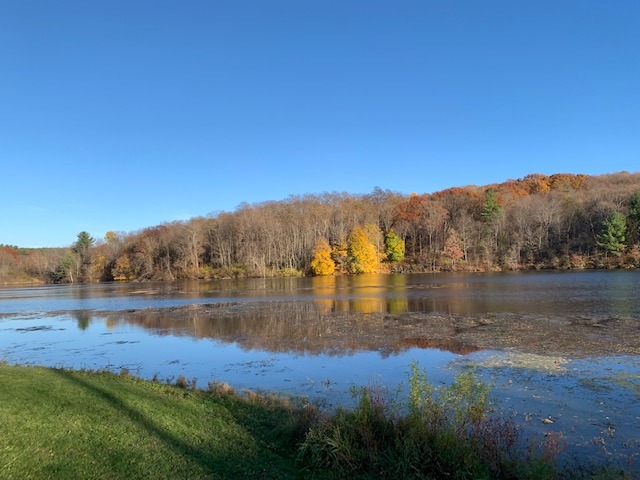 This view looks across Summit Lake in Philmont toward the site proposed for The Woods, a 16-homes development. Photo by Deborah E. Lans

Originally known as Factory Hill, Philmont at one time was the largest manufacturing center in the county, with wool and other mills that employed more than a thousand workers. But the village has been losing population for many decades. In 1920 its population was 1,919. Between 2000 and 2019 its census fell by 15%. Although the data vary from report to report, the U.S. Census Bureau puts the 2020 population at 997.

The village is a mere 1.2 square miles, has a median household income of $51,386 (about 75% of the county-wide figure) and a per capita income that, at $29,933, is likewise below the county’s median. Nearly 15% of its residents live below the poverty line.

A 2018 study that the village submitted to obtain funding, summarized existing conditions with the comment: “Philmont’s population growth has been lagging that of surrounding areas, which suggests that new housing, employment opportunities, and quality of life improvements may be needed and appropriate.… Other planning considerations include Philmont’s relatively low-income levels, younger population base, and less educated population and workforce.” The study posited that a grant would help to reverse “the cycle of disinvestment and decay currently experienced in the area.”

The Woods project lies in Philmont’s “Hamlet II District,” which its zoning law describes as “a typical village housing area where lot sizes tend to be approximately ½ acre in size.” The 21-acre site has been the subject of numerous proposed residential subdivisions in the past. In 1988 a proposal for 232 residential units (courtyard homes and 1- and 2-story townhouses) was approved, some work was done but then the project was abandoned. Subdivisions for 140-lots and a 72-lots were subsequently approved but also abandoned.

Clover Reach submitted its 16-lot proposal in November 2021, and later supplemented and modified it. The project was addressed during some seven Planning Board meetings including a two-session public hearing (according to the board’s publicly-posted minutes). All of the project documents—including renderings and visual impact sketches—were also posted on the village website.

Mr. Winch of Cover Reach and his partner, Mr. Personette, went into the project after years of successfully building and renovating area homes, believing that the “best use of the expertise of their small, local design/build firm” would be in a supporting a project like The Woods.

Mr. Personette is a member of Philmont’s Climate Smart Task Force and a Certified Passive House Consultant who focuses on issues of sustainability. He describes features of the project that were not required but that he and Mr. Winch felt were important to align the project with community character, including minimizing the tree-cutting that could occur, even post construction, through voluntary deed covenants so that a large proportion of pre-development trees will remain; the use of passive and energy-efficient design techniques and materials; and the requirement of short driveways and the absence of sidewalks to minimize land disruption. The project will use (via expansion) the existing village water and sewer infrastructure, the existence of which signaled to Clover Reach that the area was appropriate for development. The development will sit behind an 11+ acre conservation area (to which Clover Reach is adding several acres—slightly more than is required by village law), expand area hiking trails, and will sit just below a larger development, Summit Heights. The site has no wetlands or special habitat areas and is not within an agricultural district. It sits on a wooded hillside, but Mr. Winch says that the homes are sited for minimal visual impact.

At the public hearing on the application, a range of views were expressed. Many residents supported the project as necessary to grow the village tax base, as a “gift” considering that three much denser plans were permitted by zoning and prior Planning Board approvals, and as a means of diversifying property ownership “beyond slum lords.”

Others questioned whether there would be a positive financial effect and feared the environmental and visual impact.

That the project was not for “affordable” housing was also a criticism, although the theory of “chain migration” suggests that a market-rate housing project effectively does create affordable housing because it sets off a chain reaction, with the buyer of the market-rate home vacating a lower-priced home, which is then bought by someone in the community and which opens up a yet lower priced home, such that, by the fifth round of transactions there will be an affordable home available, according to planner Shane Phillips.

Shortly after the Village Planning Board issued its approval of the subdivision, Summit Lake Conservation Group and 12 Philmont residents filed a lawsuit to block the project. They charged that the public hearing was held prematurely, that requirements regulating driveway grades, access road width and the alienation of public parkland (a hiking trail) were disregarded and that the Board failed to recognize the negative impact the project would have on the environment, including its visual and community character, as well as on the community plans and goals as expressed in the 2018 grant proposal.

To date the village has filed a response denying the claims; a response from the developers is due later this month.

The eventual court decision will answer the legal questions about the project, but whether The Woods is “right” for Philmont remains to be seen.