GHENT—Two college students from Brooklyn were killed and a third was seriously hurt in a two-vehicle crash on State Route 9H, Friday, November 18. All three were headed home for the Thanksgiving holiday.

While on routine patrol, Deputy Ryen Boehme came upon the crash on Route 9H in the vicinity of the Columbia County Airport, Friday at 6:32 p.m. Deputy Boehme immediately contacted Columbia County 911 and requested fire and rescue personnel to the scene, according to a press release from Columbia County Sheriff Donald Krapf.

The crash appears to have been a head-on collision between two vehicles, with one of the vehicles fully-involved in fire. With the assistance of an uninvolved motorist, who stopped at the scene to help, the operator of the vehicle that was on fire, Michael Shepherd, 19, was removed from the car. Unfortunately two additional occupants of that vehicle, Boburmirzo Sharipov, 20, and Demetre Shepherd, 17, Michael’s brother, were later pronounced dead at the scene. The Greenport Rescue Squad took Michael Shepherd to Albany Medical Center and he was later transferred to Upstate Medical University in Syracuse for treatment of life-threatening injuries.

The driver of the other vehicle was Elliott Largent, 35, of Philadelphia, PA. He was taken by the Greenport Rescue Squad to Albany Medical Center for treatment of his injuries.

It was further reported that Michael Shepherd and Boburmirzo Sharipov are students at Syracuse University and Demetre Shepherd is a University of Albany student. All were returning home for the Thanksgiving Day break.

Drugs and/or alcohol do not appear to have been a factor in the cause of this accident.

Red Cross: Keep an eye on what you fry

GHENT—Thanksgiving is one of the country’s top days for cooking fires, and the American Red Cross of Eastern New York encourages family chefs to follow simple steps to prepare the holiday feast safely.

“Home fires are a real threat over the holidays and represent most of our disaster responses in our region. Help keep your family safe by always keeping an eye on what you fry, testing your smoke alarms monthly and practicing your two-minute escape plan with everyone in your household,” Kevin Coffey, Regional CEO, American Red Cross Eastern New York Region said in a press release.

*Never leave cooking food unattended. If you must leave the kitchen, even for a short period of time, turn off the stove

*Move items that can burn away from the stove. This includes dishtowels, bags, boxes, paper and curtains. Also keep children and pets at least three feet away

*When frying food, turn the burner off if you see smoke or if the grease starts to boil. Carefully remove the pan from the burner.

*Keep a pan lid or a cookie sheet nearby. Use it to cover the pan if it catches fire. This will put out the fire. Leave the pan covered until it is completely cooled.

Follow these safety tips and visit redcross.org/fire for more information, including an escape plan to practice with your family. You can also download the free Red Cross Emergency and First Aid apps by searching “American Red Cross” in app stores. 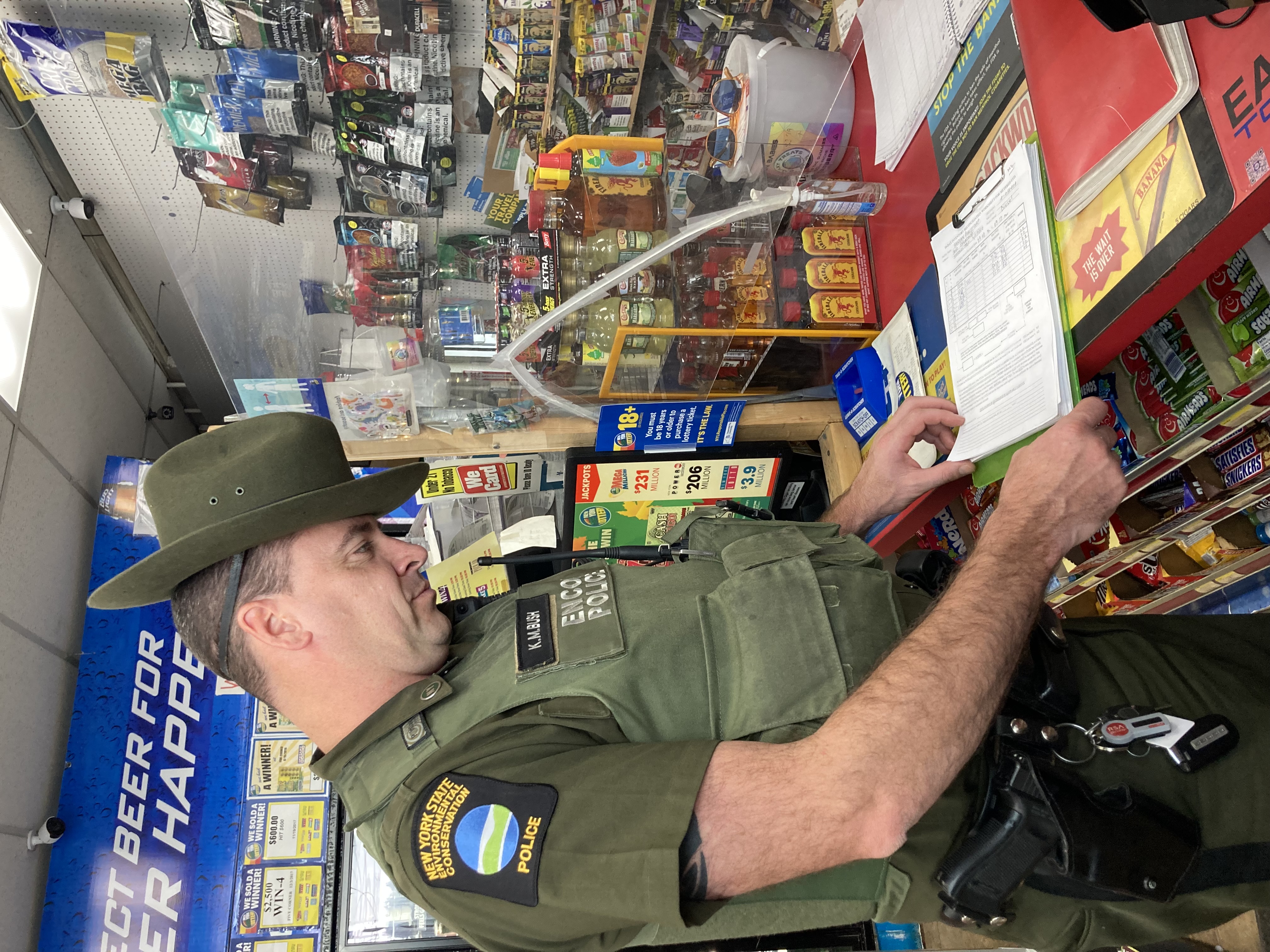 An EnCon officer inspects this gas station’s 10-day inventory reconciliation sheets, which compare the amount of fuel received and the amount measured in the tank. Photo courtesy of NYSDEC.

Environmental Conservation Police Officers (ECOs) from DEC’s Division of Law Enforcement, in coordination with DEC’s divisions of Environmental Remediation and Air Resources staff, conducted the detail to protect public health and the environment by inspecting gas stations in disadvantaged communities disproportionately burdened by pollution, as well as other locations in the region.

“Enforcement details are an important tool to protect residents and natural resources from pollution and hold those responsible accountable. This latest gas station detail was an opportunity for us to take a hard look at a particular industry and work with facilities with violations to identify corrective measures and meet compliance requirements that protect public health and the environment,” Regional Director Luisi said in a press release.

Harmful vapors that escape from faulty petroleum storage tanks can impact the quality of life in a community and potentially create health issues for certain populations. Leaking petroleum tanks can contaminate large amounts of soil and water and have the potential to reach streams, rivers, lakes, and other sources of drinking water, contaminating the water used by people and wildlife. The cost of cleanup at facilities after a leak can be in the hundreds of thousands of dollars or more.

Each facility with violations was given an appropriate time frame to correct their infractions. If the violations are not corrected in the required time frame, the facility will be subject to formal administrative enforcement, which may include monetary penalties. DEC will perform follow-up inspections at all the facilities to ensure compliance.