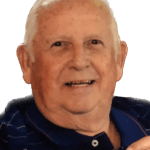 LEESBURG, FL—Theodore Richard Beck, 85, of Leesburg, Florida, was called home to be with his “Special Angel,” his wife, Dolores Beck, January 14, 2023.

Born June 26, 1937 in Albany, he was the son of the late Theodore Martin and Dorothy Louise (Hartigan) Beck.

Before his retirement, “Ted” was a Teamsters truck driver for several companies, lastly for Grimm Building Materials out of Albany. Although born and raised in Albany, he spent many years in Columbia County and later several years in the Sunshine State of Florida. He was passionate about and very involved in serving the community wherever he hung his hat.

In Albany, he was a life member of the West Albany Fire Department #1 and held all active duty positions from deputy lieutenant through to captain. In Columbia County, came one of his most esteemed moments when he was named Columbia County’s Firefighter of the Year in 2015. He was also a county and state fire instructor, Columbia County deputy fire coordinator-county car 6, past president and past chief of the Stuyvesant Falls Fire Dept #2, as well as a charter member of the Columbia County HazMat Team.

In Florida, he was a member of the Eustis Elks Lodge #1578 in Tavares, where he was esteemed lecturing knight. In all communities you would see him dishing up the food, selling tickets, prepping fish fries or chickens, recruiting new firefighters, teaching new firefighters, writing newsletters among many other things.

If not at a firefighter or community event, Mr. Beck was at one of his many computers. He was also an early adopter of new technology, including being one of the first to utilize commercial dial up internet in the early 90s.

He is survived by: his daughter, Carole (Tim) Plant of Albany; his sisters, Evelyn (Frederick III) Bauer and Mildred (Herb) Betzwieser both of Albany; his grandchildren, Michael (Alissa) Crispino and Ashley (Michael) Sgroi; his great-grandchildren, Simone, Michael, Leona, August, Xander and Eliana; his companion, A. Lorraine Stults; several nieces and nephews. Besides his parents and loving wife, he was also predeceased by his brother, James Beck and nephew, Frederick Bauer, IV.

He was a talented man, having earned a degree in electrical engineering from Worcester Polytechnic Institute and showed extraordinary skills in large and small carpentry projects.

He was endlessly curious and inventive and will be missed. A natural burial took place January 19, 2023 in the Town of Rhinebeck Cemetery. Arrangements were with the Sacco Funeral Home, Greenport.

HUDSON—Dolores J. “Dolly” Eisner, 90, of Hudson passed away in the early morning hours of Wednesday, January 18, 2023 at Columbia Memorial Health.

Born June 6, 1932 in Stuyvesant to the late Stanley Rustick and Frances Phillips, she was a former Third Ward alderwoman for the City of Hudson and the city’s first woman mayoral candidate in 1981. She retired from the Hudson City School District and will be fondly remembered for her years working at Sam’s Supermarket and Columbia Memorial Hospital. Mrs. Eisner was also a member of the Columbia Memorial Auxiliary, Elks Ladies Auxiliary and Hudson Business and Professional Women.

In addition to her parents, she was predeceased by her husband of 42 years, Harold, and her brother, Ronald Rustick.

She is survived by: her daughter, Michelle Eisner; son, John T. Eisner (Ann) of Hudson; her sister, Sandra Stetz (George) of North Carolina; grandchildren, Brian, Christopher (Ryan), Emily (Christopher), Marta (E.J.), Kimberly (Daniel), and Johnny (Janell); nine great-grandchildren; several nieces and nephews, and Debbie Roeder Eiche, who was like a daughter to her.

Calling hours will be held Monday, January 23, 2023 at the Sacco Funeral Home, Greenport from 4 to 7 p.m. Funeral prayers will begin at 4 to 4:15 p.m. with Fr. Anthony Barratt officiating.

Born in Hudson February 12, 1930, she was the daughter of the late Victor and Laura (Butkus) Krisniski. She was a graduate of St. Mary’s Academy in Hudson and worked as an operator and supervisor for New York Telephone and later Nynex and Verizon. She retired from the phone company after 38 years. She was a devoted and active member of Holy Trinity Parish/ St. Mary’s Church and the Christian Service Committee as well as the Greenport Seniors.

She is survived by: her sister, Stella Alessio of Pittsfield, MA; many nieces and nephews. In addition to her parents, she was predeceased by her beloved twin sister, Alice P. Krisniski and brothers, Stanley, Victor, Frank, Peter, Anthony and Edward Krisniski.

Born in Wrightsville, Georgia, September 14, 1945, she was the daughter of the late Aaron and Willie Mae (Hightower) Walker. She was employed for many years with Becton Dickinson Medical Device Company in Caanan, CT, until her retirement. She was a devoted member of the Gospel Lighthouse Pentecostal Church in Stottville.

She will be greatly missed by: her husband, Willie Mack Hurst; sons, Mack Hurst, Jonathan Hurst, Ray (Tasha) Hurst, Kenneth Hurst; daughters, Tresa (Oneill) Bryan and Dorothy Hurst; a host of grand- and great-grandchildren, nieces and nephews. She was predeceased by: her son, K-Wong Hurst in 2018 and several brothers and sisters.

Calling hours will be held Saturday, January 28, 2023 from 9 to 10:30 a.m. at the Sacco Funeral Home, 700 Town Hall Drive, Greenport. Services will be at the funeral home followed by burial in Cedar Park Cemetery. To leave online condolences visit www.saccofuneralhome.com

PHILMONT—Andrew Gordon Sheldon, 79, of Philmont died Thursday, October 6, 2022 at Pine Haven Home in Philmont. Born May 15, 1943, he was the son of the late Robert and Elizabeth (VanAlstyne) Sheldon.

He worked for many years at Atlas Cement Company in Hudson. There are no services scheduled. Arrangements are with the Sacco Funeral Home, Greenport.

Born March 8, 1991 in Catskill, she was the daughter of Victoria A. Teator and Dennis Schaefer. She most recently worked as a waitress at the Ambrosia Diner in Catskill.

There are no funeral services scheduled. Leave online condolences to www.saccofuneralhome.com

RHINEBECK—Eunice M. Swart, 89, lifelong resident of Pine Plains, passed away peacefully at the Thompson House, January 19, 2023. She was born December 8, 1933, the daughter of Wilbur and Margaret (Turbarg) Doyle,.

She was a natural caregiver who worked for many years at Ferncliff Nursing Home as a certified nursing assistant. She then took care of her grandchildren. She loved the young and seniors alike and had a special place in her heart for cats. Over the years she enjoyed traveling with her family, especially trips that involved the ocean. She kept busy with crossword puzzles and word searches.

Mrs. Swart is survived by: her five children, Linda (Paul) Treanor, Jim (Tina) Swart, Doreen (Jim) Weisner, David (Justine) Swart and Melissa Swart; six grandchildren, three great-grandchildren and one on the way. She was predeceased by her husband, Earl Swart in 2001, in addition to her five siblings.

According to her wishes, no formal services will be observed. Donations in her memory may be made to the Thompson House, the Columbia-Greene Humane Society or the American Cancer Society. To leave a message of condolence for the family visit www.peckandpeck.net