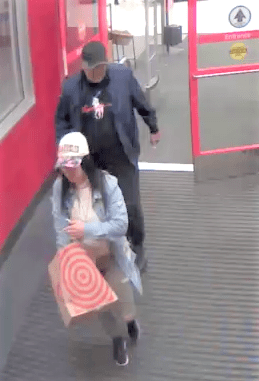 Pictured are suspects in a grand larceny investigation by State Police. Photo contributed

In September 2022, a purse was stolen from La Bella’s Restaurant in Valatie, and the credit cards contained within were later used to purchase gift cards at Target in East Greenbush.

State Police investigators ask that anyone with any information regarding the two pictured subjects or their whereabouts contact the State Police at 845-677-7300. Reference case #11075121.

Mr. Boice was additionally arrested for seventh degree criminal possession of a controlled substance and Robert Perez on an outstanding arrest warrant for petit larceny, both class A misdemeanors.

At approximately 4:55 p.m. that day, troopers stopped a 2000 Ford Crown Victoria matching the description of a vehicle used in the theft of catalytic converters in the area. Investigation determined the occupants possessed two stolen catalytic converters as well as multiple tools to cut them from vehicles.

About 3.3 grams of fentanyl was also located in the vehicle.

Robert Perez was arraigned before Justice Michael Brandon in Claverack Court and was sent to Columbia County Jail without bail. The remaining subjects were all issued appearance tickets returnable in Canaan Court January 12.

VALATIE—Several area families were hit by tragedy, each, just before Christmas. Local community organizations have put out a call for help for each of them.

According to an email announcement from GhentCAN, a community action network, “Our friend and neighbor,” Carl Quinn has had tragedy strike his family once again. His sister and niece lost everything (including their pets) in a devastating fire December 21 in Valatie. They are now living with Mr. Quinn.

What follows is part of Mr. Quinn’s Facebook post with links to make a donation or join the meal train to help out: “As many of you have heard, there was a devastating fire at the apartment of my sister Cathy and my niece Jessica… They have lost everything including their pets…just 3 days before Christmas, they’ll begin facing how to rebuild their lives and start over from scratch. But with the incredible support of our family, our friends, and this community, we’ll help them every way we can.”

According to Columbia County 911 Valatie Fire and Rescue were summoned to 3510 New Street, Valatie December 21 at 3:19 a.m. for a structure fire.

Our Community Cares is coordinating financial donations, clothing donations as well as a meal train to assist our family, wrote Mr. Quinn. The links are below for anyone is interested. Read more at both links and visit the Our Community Cares, Inc. Facebook page.

Tax-deductible Financial Donations can be made at givebutter.com

Meal Train to provide a meal for the family: https://www.mealtrain.com/trains/

Volunteers from the Hudson Valley Chapter of the American Red Cross provided immediate emergency aid to two people after the fire.

The Red Cross provided financial assistance which can be used for necessities such as shelter, food, and clothing to two adults. Volunteers also offered emotional support, health services and comfort kits containing personal care items, and stuffed animals for the children. In the coming days, Red Cross staff and volunteers will remain available to help those affected by the fire as they navigate the road to recovery.

According to an email from the New Lebanon Town Clerk’s Office, “There was a horrible accident yesterday [December 23] across from the Town Hall where a giant tanker truck lost control on the icy road and hit two buildings. Thank god nobody was injured, but we now have many community members who are displaced for Christmas.

“We have taken care of getting them a place to stay, but they had to leave with the clothes on their back and they have nothing.”

According to County Control, Lebanon Valley Fire and Chatham Rescue were called to 4 Main Street, December 23 at 5:15 p.m. for an accident in which a tanker tractor trailer ran into a house.

State police investigated on the scene and Command Units on the scene reported an overturned milk truck leaking milk and fuel. The building inspector was called to the scene.

Stephentown firefighters provided mutual aid to close Route 22. The Red Cross was called in to assist residents. Firefighters were clear from the scene at 12:46 a.m.

“Many people have asked how they can help,” wrote Town Clerk Marcie Robertson. “The families are asking for gift cards. Visa gift cards, store gift cards, grocery gift cards, other gift cards. They basically need everything from clothing to toiletries to food.

“Mavericks has generously offered to collect any donations that people want to drop off. They can be dropped off during their normal hours of 6 a.m. to 4 p.m.

“Supervisor Tistrya Houghtling is coordinating with Mavericks and the victims to make sure everybody gets the donations in a timely fashion. If you are able, drop off a gift card of some kind to Mavericks to help these families.”