He was issued an appearance ticket to appear in Stockport Court February 7.

The case dates back to October 22, 2021 when State Police conducted an extensive search for him in the Southers Road area of Stockport after several suspicious incidents were reported that day. END_OF_DOCUMENT_TOKEN_TO_BE_REPLACED 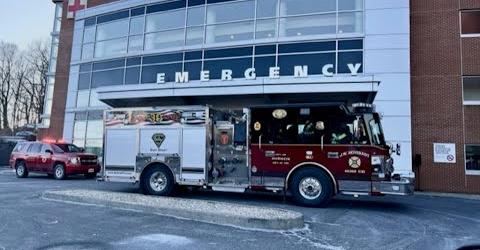 HUDSON—Hudson firefighters were called to Columbia Memorial Hospital (CMH), 71 Prospect Avenue, for a reported broken pipe on the second floor above the ER and an odor of electrical burning January 16 at 5:42 a.m. Greenport and Stottville firefighters provided mutual aid and Germantown, Claverack and Catskill firefighters provided standby coverage.

CMH officials issued a press release that said, “An area wide power outage last night resulted in cold air infiltrating a mechanical area above the imaging unit and emergency department. This cold air caused a sprinkler head to freeze and burst, dispersing water to some ceiling tiles in a small number of bays in the ED and in the adjacent CT imaging suite. Staff disengaged power from the impacted areas and have begun replacing the saturated ceiling tiles.”
An alternate CT suite was made available “for any emergent needs.” Ambulance traffic was temporarily redirected, though the ED remained open and available for emergency walk-in care. Impacted areas were expected to be back in operation later that day or the next.

Firefighters were back in service at 9:02 a.m. END_OF_DOCUMENT_TOKEN_TO_BE_REPLACED

LIVINGSTON—A New Jersey woman was charged with the January 4 stabbing of a man on Bells Pond Road.

State Police responded to the scene at 8:23 a.m.

An investigation determined that during a verbal domestic dispute, Ms. Morrell allegedly stabbed the victim in the hand.

He was taken to Albany Medical Center with non-life-threatening injuries. Ms. Morrell was taken to Columbia Memorial Hospital for evaluation. END_OF_DOCUMENT_TOKEN_TO_BE_REPLACED

In August 2021 State Police began investigating the possible sexual assault of a victim taken to Columbia Memorial Hospital. Their investigation determined Mr. Folmsbee allegedly provided an alcoholic beverage to the victim, who is under the age of 21, and then performed a criminal sexual act while the victim was incapacitated. END_OF_DOCUMENT_TOKEN_TO_BE_REPLACED

LIVINGSTON—A resident of the Triform Camphill Community at 20 Triform Road, died from injuries suffered when he was hit by a truck, December 15 at 10:25 a.m.

State Police from the Livingston barracks responded to Triform for the accident.

Their initial investigation determined the victim, David H. Wagner, 23, a Triform resident, was fatally struck by a Chevrolet 3500 pick-up truck while clearing brush with fellow employees and volunteers at the facility.

Livingston firefighters and Northern Dutchess Paramedics were called to the scene. Paramedics took Mr. Wagner to Columbia Memorial Hospital where he died. END_OF_DOCUMENT_TOKEN_TO_BE_REPLACED