HUDSON—City police have arrested a local man on charges that he allegedly forcibly raped a young girl.

Jamel D. Brandow, 36, of Hudson was charged with first degree rape—forcible compulsion, child less than 11 years old, a class B felony; first degree unlawful imprisonment, a class E felony; second degree menacing—with a weapon and endangering the welfare of a child, both class A misdemeanors, by Hudson Police, May 5.

Columbia County 911 advised Hudson Police that they had just received a 911 hang up call from a business within the City of Hudson, May 5 at 10:12 a.m. END_OF_DOCUMENT_TOKEN_TO_BE_REPLACED

HUDSON—An Albany man was charged by Hudson Police for allegedly holding a woman against her will.

Police arrested Najahliek Edmunds, 22, of Albany October 23, in connection with an incident at the Hudson Terrace Apartments that happened May 2.

Police say they got a call about a female being held against her will at 15 North Front Street, Apartment 3E (Hudson Terrace Apartments) and went there to investigate. Police arrived and were checking the apartment when they encountered Mr. Edmunds holding a large kitchen knife while standing in a dark room. He dropped the knife as ordered by police and was taken into custody. END_OF_DOCUMENT_TOKEN_TO_BE_REPLACED

GREENPORT—State Police from the Livingston barracks arrested a Chatham man in connection with defrauding a victim.

Richard A. Dick, 43, of Chatham was charged with petit larceny, a class A misdemeanor, October 11. 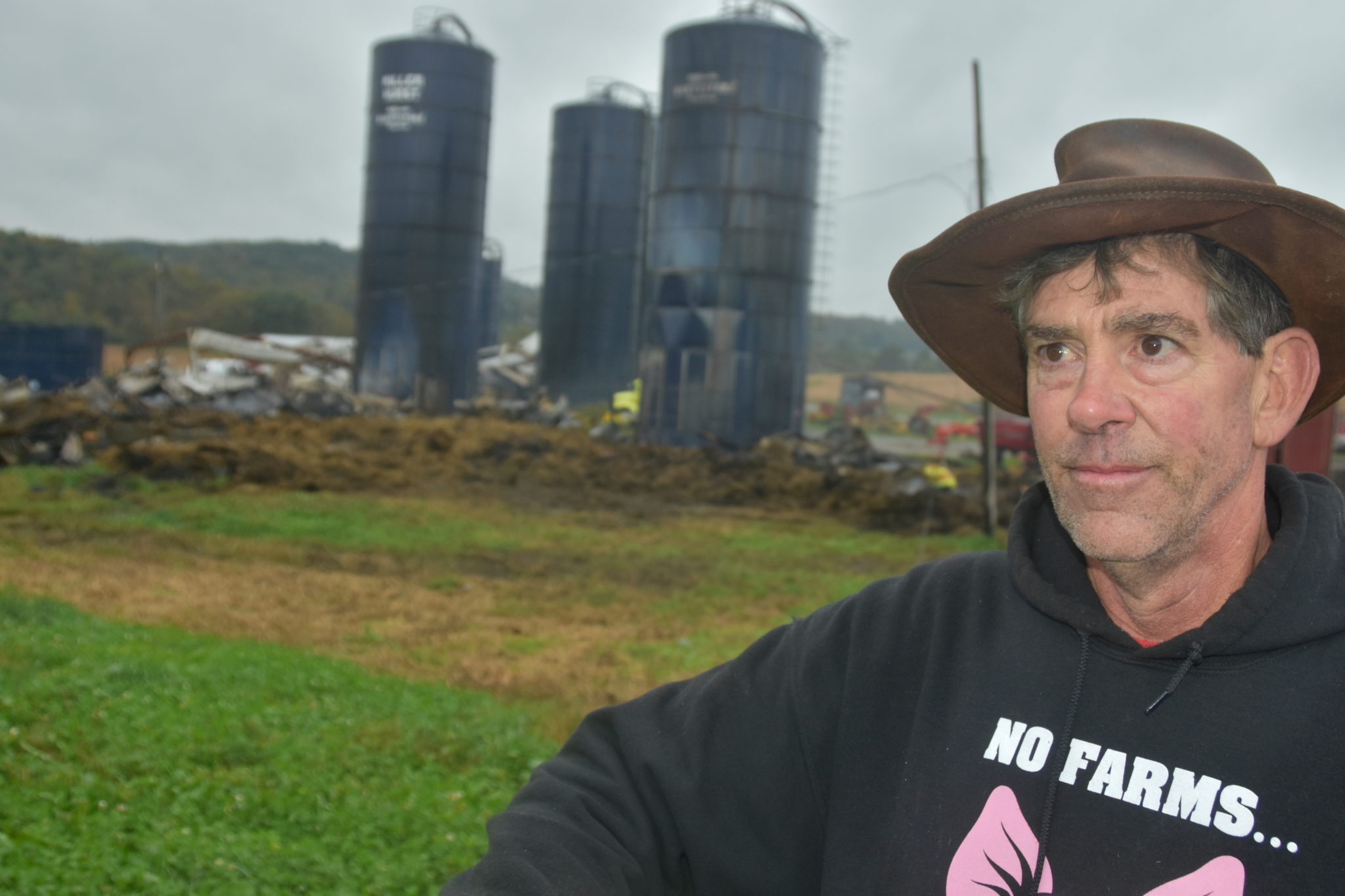 Dairyman Mike Miller stands near the remains of his dairy barn on Millerhurst Farm, Ancramdale.Photo by Lance Wheeler

ANCRAMDALE—It’s a farmer’s worst nightmare and it happened at Millerhurst Farm, 3195 State Route 82, when the dairy herd and barn were lost to fire the night of October 14.

Michael Miller who, with his wife, Emily, owns and operates the farm that has been in the family since 1770, told newsman Lance Wheeler the morning after the fire in a video interview that he had finished up chores for the day around 5 p.m. “It seemed like another fine and normal day on the farm,” he said.

He hit the sack around 7 p.m. and shortly thereafter, his wife noticed the power flickering and then go off. She went outside to find smoke everywhere. Mike said he rushed out to try to save some of the cows but found the barn already engulfed in smoke and flame. END_OF_DOCUMENT_TOKEN_TO_BE_REPLACED

ANCRAM—A 16-year-old Ancramdale boy was killed when the pickup truck he was driving collided with a tree, July 20 at 7:25 p.m.

Columbia County 911 dispatched sheriff’s deputies to a one-vehicle accident in the area of 164 Over Mountain Road, just south of Renger Road.

Deputies found that a 1996 GMC Sonoma pickup truck, operated by the teenager had been traveling west on Over Mountain Road when, for unknown reasons, the truck failed to negotiate a curve, went off the north side of the dirt road and struck a large tree with the driver’s side of the vehicle, according to a press release from Columbia County Sheriff David P. Bartlett. END_OF_DOCUMENT_TOKEN_TO_BE_REPLACED