HUDSON—The Hudson Housing Authority (HHA) has submitted a Request for Qualifications (RFQ) to find partners for redeveloping its existing property and developing potential new properties. HHA residents also elected representatives to its governing Board of Commissioners, officials reported at meetings October 17 and November 21.

The HHA runs the 135-unit income-restricted Bliss Tower high-rise and three low-rise apartment buildings on its grounds. In 2021, HHA officials determined that these buildings, at 50 years old, have outlived their usefulness and need to be replaced. To do so, it needs partners to help with designing the new residences and carry on the construction.

It also needs additional land because new units could require more land than the existing ones. And before the existing buildings come down, the HHA must rehouse all of its current tenants. HHA Board Vice-Chair Clair Cousin, who is also the supervisor from Hudson’s First Ward and executive director of the Hudson Catskill Housing Coalition, assured HHA tenants on October 17 that they will “not be displaced” and that they will be able to stay in Hudson. END_OF_DOCUMENT_TOKEN_TO_BE_REPLACED 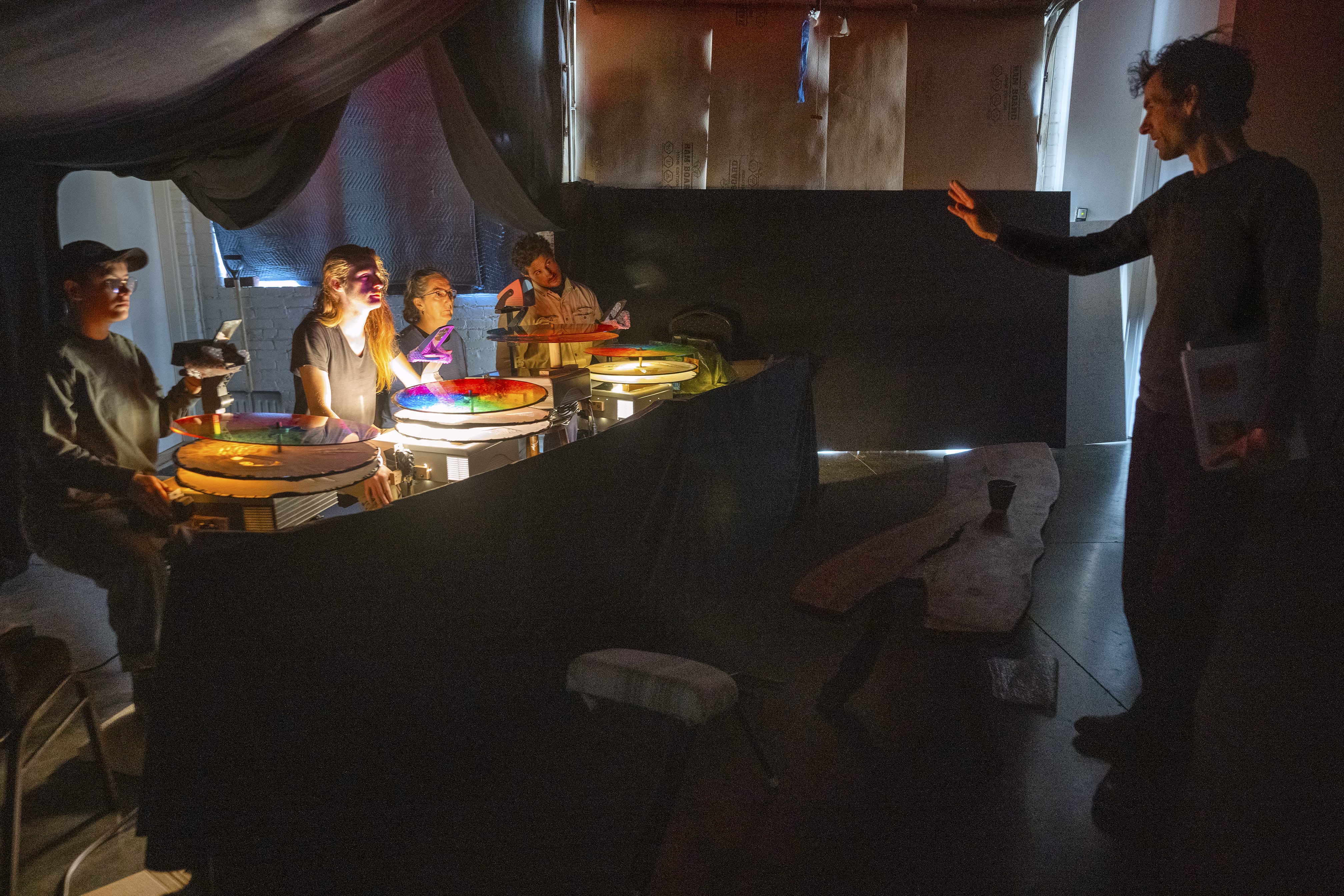 Behind the rear projection screen operators of the light apparatus are Else Orbe, Luther Gennert, Laura Summer and Frank Agrama. Nathaniel Williams (r) is giving some guidance. Photo by David Lee 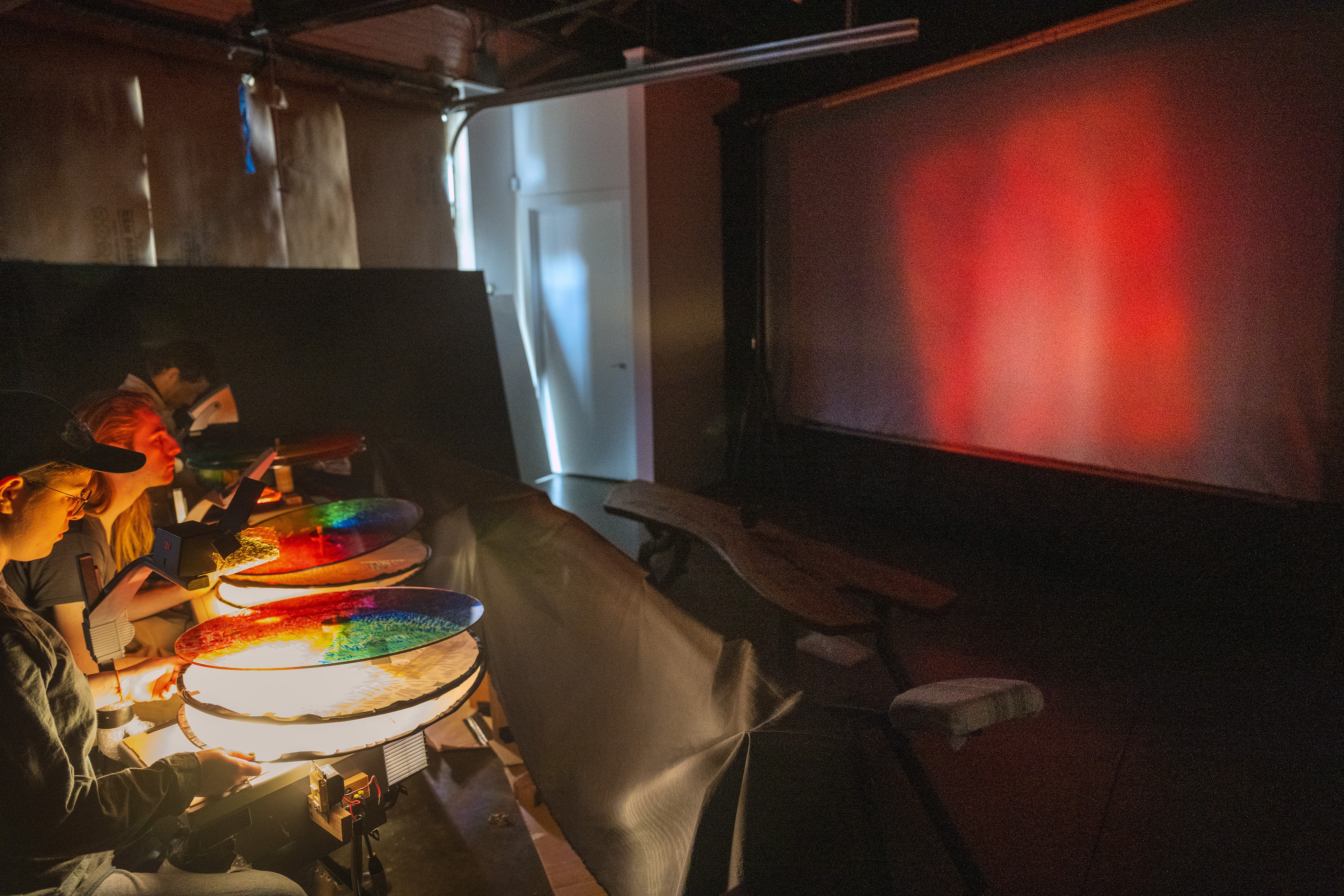 Operators of the light apparatus at work. Photo by David Lee

HUDSON – There will be a free public performance of a unique light and music composition at the Lightforms Art Center, 743 Columbia Street, called “Rainbows by Invention: A Journey in Choral Light” on December 1 at 7 p.m., December 2 at 5:30 p.m., and December 3 — the evening of Hudson’s Winterwalk – at 5:30 p.m. It is a collaboration between artist Nathaniel Williams, composer Don Jamison and students from the M.C. Richards Program of Free Columbia.
Five songs will be sung by a group of community singers with accompaniment by a quartet of light choreographers whose instruments project an entirely physical dance of colors. Between each of the songs there will be an improvised light interlude. The entire program will last about 30 to 40 minutes.
Behind the rear projection screen operators of the light apparatus are Else Orbe, Luther Gennert, Laura Summer and Frank Agrama.

“We are not trying to illustrate or animate but to accompany the music,” said Mr. Williams. He said this original project drew inspiration from the early 20th century musician and inventor Thomas Wilifred who invented an instrument called Clavilux, a sort of organ whose name translates as “light played by key.” But viewers of a certain age may also be reminded of the Joshua Light Shows that accompanied rock bands in the ’60s and early ‘70s.
This will be the last program in Columbia County for Mr. Williams who has been a driving force behind Free Columbia and the M. C. Richards Program. He has accepted a position at the Goetheanum Free School of Spiritual Science and seat of the General Anthroposophical Society which is located near Basel in Switzerland where he will move at the end of December 2022.
There is no entrance fee for the performance. Donations will support Free Columbia and Lightforms Art Center. All ages are welcome. GHENT—The radio commentator Paul Harvey famously wrote: “What’s mainly wrong with society today is that too many Dirt Roads have been paved. There’s not a problem in America today—crime, sex, education, divorce, delinquency—that wouldn’t be remedied if we just had more Dirt Roads, because Dirt Roads give character.”

Most of the county’s residents have similarly strong opinions on whether to see more town roads paved or left as gravel.

Perhaps the strongest argument for maintaining dirt roads (which usually means gravel roads) is their significance as a marker of rural character. The Chatham Dirt Road Coalition, for example, says that “dirt roads are a heritage worthy of preserving for many reasons: they provide a safer place for exercise and recreation than faster paved roads, they enhance the natural beauty of our landscape, and in a very real way they are a living connection to our history.” The coalition’s website includes a hand-drawn map illustrating the more than 40 miles of dirt roads in Chatham. END_OF_DOCUMENT_TOKEN_TO_BE_REPLACED

ANCRAM—A majority of Town Board members voted to go forward with the planned 2023 revaluation of town properties despite the inflated real estate sale prices brought on by the pandemic housing market boom.

Town Supervisor Art Bassin posed the question at the November 17 Town Board meeting: Do we do the reassessment in 2023 as scheduled or do we defer for a year to give the market a chance to settle down?

Ms. Booy noted that the towns of Stockport, Canaan and New Lebanon have all decided to postpone their revaluations, revals for short, until 2024. END_OF_DOCUMENT_TOKEN_TO_BE_REPLACED According to Elwin Moore, who coordinates the event, there were 142 families served by the annual RoeJan Food Pantry Thanksgiving Basket distribution held in the Hillsdale firehouse Saturday morning, November 19. That is approximately the same as in previous years. He noted that the big difference this year is that many extended families are living together because of the increasing rent prices. Food boxes are packed for larger families. An army of 35 volunteers assisted as customers wheeled carts through the tables heaped with canned and dry goods as well as bread, dairy and meat. At one of the distribution stations, volunteer Wendy Rubat (l) packs a box for a customer and Landon Poucher, age 9, keeps the table stocked. The RoeJan Food Pantry will hold its annual Christmas holiday basket distribution December 17. Photo by David Lee